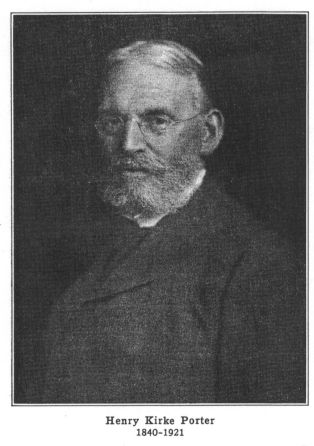 Henry Kirke Porter ( - ) was an American and Representative of the for .

Porter was born in . In 1860, he graduated from in . He also helped found the that year. He attended the in .

He continued his theological training at the in , but in 1866 he was given a gift of $20,000 by his father, which changed the course of his life.

He invested that money with a partner, , and formed the Smith & Porter Machine works. They opened a small shop in , which grew to become . Porter served as president of the company.

He continued as President of H. K. Porter, Inc. until his death at age 81 in , and was buried in the in Pittsburgh.