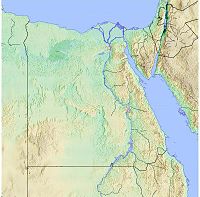 Tanis (Τάνις), the Greek name of ancient Djanet (modern صان الحجر Ṣān al-Ḥaǧar), is a city in the north-eastern Nile delta of Egypt. It is located on the Tanitic branch of the Nile which has long since silted up. 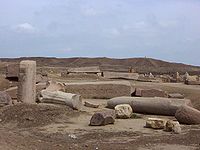 The ruins of Tanis today.

Tanis was founded in the late Twentieth Dynasty,[citation needed] and became the northern capital of Egypt during the following Twenty-first Dynasty. It was the home city of Smendes, founder of the 21st dynasty. During the Twenty-second Dynasty Tanis remained as Egypt's political capital (though there were sometimes rival dynasties located elsewhere in Upper Egypt). It was an important commercial and strategic city until it was threatened with inundation by Lake Manzala in the 6th century AD, when it was finally abandoned. The refugees founded the nearby city of Tennis. 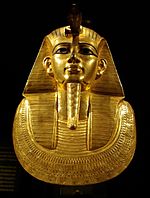 The gold funerary mask of Psusennes I. 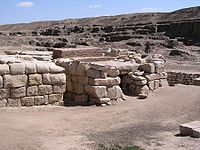 The Royal Tombs of Tanis

There are ruins of a number of temples, including the chief temple dedicated to Amun, and a very important royal necropolis of the Third Intermediate Period (which contains the only known intact royal Pharaonic burials — the tomb of Tutankhamun having been entered in antiquity). Many of the stones used to build the various temples at Tanis came from the old Ramesside town of Qantir (ancient Pi-Ramesses/Per-Ramesses), which caused many former generations of Egyptologists to believe that Tanis was, in fact, Per-Ramesses. However the burials of three Dynasty 21 and Dynasty 22 pharaohs — Psusennes I, Amenemope and Shoshenq II, survived the depredations of tomb robbers throughout antiquity. They were discovered intact in 1939 and 1940 by Pierre Montet and proved to contain a large catalogue of gold, jewelry, lapis lazuli and other precious stones including the funerary masks of these kings.

The chief deities of Tanis were Amun, his consort, Mut, and their child Khonsu, forming the Tanite triad. This triad was, however, identical to that of Thebes, leading many scholars to speak of Tanis as the "northern Thebes".

In 2009, the Egyptian Culture Ministry reported archaeologists had discovered the site of a sacred lake in a temple to the goddess Mut at the San al-Hagar archaeological site in ancient Tanis. The lake, built out of limestone blocks, had been 15 meters long and 12 meters wide. It was discovered 12 meters below ground in good condition. This was the second sacred lake found at Tanis. The first lake at the site had been identified in 1928.[1]

In the film Raiders of the Lost Ark, Tanis was said to be the resting place of the Ark of the Covenant which was hidden in a secret chamber. Tanis was inaccurately depicted as having been destroyed in a sand storm and buried until 1936 when it was discovered by a German expedition outside Cairo. In fact, Tanis was the site of numerous archaeological digs beginning in the 19th century, involving Flinders Petrie and Auguste Mariette.