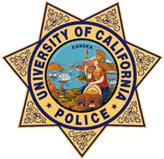 The University of California Police Department (UCPD) is the agency charged with providing law enforcement to the campuses of the system.

The University of California was established in 1868, and moved its first campus to Berkeley in 1873. The San Francisco and Los Angeles campuses followed shortly after that. The original UCPD department at Berkeley was founded after . However, it was not until September 1947 that the Regents of the University of California established UCPD as a state law enforcement agency.

The UCPD is one of several police agencies in California having a state-wide jurisdiction and authority (other examples include the , the , and the ). UCPD officers, like most California police officers, are empowered by section 830.2(b) of the , giving them authority as duly sworn s throughout the state of [ [http://www.leginfo.ca.gov/cgi-bin/waisgate?WAISdocID=8600961058+0+0+0&WAISaction=retrieve WAIS Document Retrieval ] ] . As specified by section 92600 of the California Education Code, they are given wide geographical range to enforce the laws of the state [ [http://www.leginfo.ca.gov/cgi-bin/waisgate?WAISdocID=8601971222+0+0+0&WAISaction=retrieve WAIS Document Retrieval ] ] .

The department consists of ten departments (one for each UC campus), each led by its own . Unlike other state departments, there is no single Chief of the UCPD, however one Chief is selected as the department's central coordinator (currently Chief Karl Ross of UCLA). The coordinator is responsible for compiling from each campus, as required by the , and for ensuring that the various departments are operating within the UCPD's mission. However, the coordinator does not dictate the day to day operations of the department, and each department sets its own Standard Operating Policies.

Still, the UCPD is more coordinated than this organization would suggest. The department shares a central mission and philosophy, including that of . The departments maintain communication with each other and frequently call upon each other for , which is facilitated by a department standard uniform and duty gear (including using the same trunked radio system at all departments, allowing personnel to use their issued radios at any campus).

Almost all of the departments have a (CSO) program. CSO's are non-sworn student employees that perform various tasks for the department. Although their job description varies slightly from department to department, most utilize CSO's to perform night escorts, building checks, and general citizen assistance. Because CSOs have no legal authority, their main purpose is to act as additional "eyes and ears" of the department.

In addition to CSO programs, UCPD departments each have a Communications Division, which is the police dispatch center and the 9-1-1 access point for each UC campus. Each department also staffs a Detective Division to investigate crimes and other cases reported by citizens and the Patrol Officers.

In addition to having CSO's, the UCB Police Department also employs full-time Security Patrol Officers (SPO). The SPO's are non-sworn, full-time members of the police department who perform duties such as writing police reports, employee escorting, and building security. Currently there are SPO's stationed at the Northwest Animal Facility, Richmond Field Station, Marchant Building and the Physical Plant Facility.

The UCLA Police Department is temporarily located at 11000 Kinross Ave as a new and modern police station is being constructed at the department's original location of 601 Westwood Plaza, Los Angeles, CA.

In addition to having a UCLA Community Service Officer Program (UCLA CSO) [http://www.ucpd.ucla.edu/ucpd/cso/] , the UCLA police department operates the UCLA Emergency Medical Services (UCLA EMS) [http://www.ems.ucla.edu] . The EMS program responds to 9-1-1 medical calls on campus, as well as in the surrounding Westwood Village community, 24 hours a day, 365 days a year. All of the employees of UCLA EMS are UCLA students who are EMT trained. The program owns three type II s, and one electric cart for special events.

The UCSD Police Department is located at 9500 Gilman Drive #0017, La Jolla, CA. This is the Campus Service Complex, Building B.

The UCSFPD does not provide police services for the UC's campus in downtown San Francisco. UC Hastings has its own internal security department.

In addition to having a CSO program, the UCSB police department operates the UCSB Paramedic Rescue Unit [http://police.ucsb.edu/paramedics.html] . The EMS program responds to 9-1-1 medical calls on campus, as well as in the surrounding Isla Vista community, 24 hours a day, 7 days a week, 365 days a year. The student employees are EMT trained, and the non-students are paramedic trained. In Santa Barbara County, this allows the ambulance to be considered an ALS provider. The program utilizes a type III .