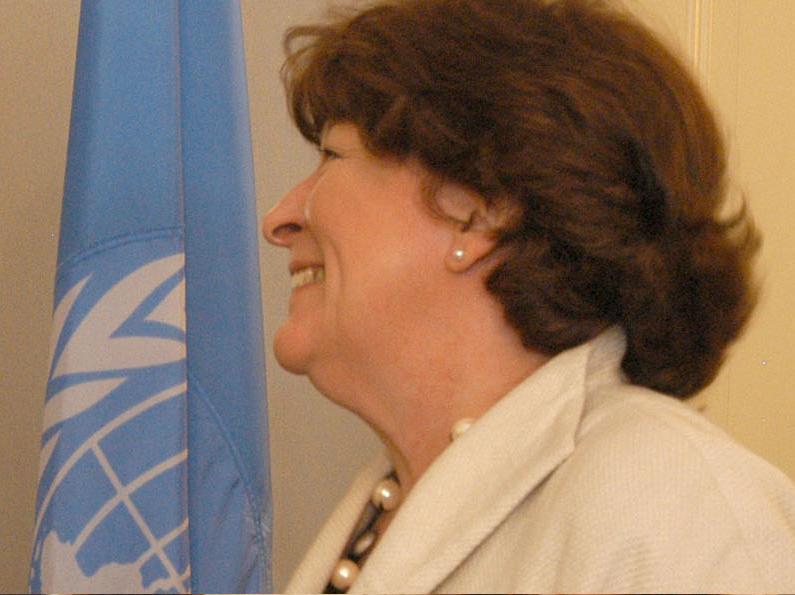 Louise Arbour, CC (born , ) is the former , a former justice of the and a former Chief Prosecutor of the International Criminal Tribunals for the former Yugoslavia and Rwanda.

Born in , to Bernard Arbour (deceased) and Rose Ravary, the owners of a hotel chain, she attended convent school, during which time her parents divorced. As editor of the school magazine, she earned a reputation for irreverence.

In 1967, she graduated from College Regina Assumpta, and proceeded to the where she completed an with distinction in 1970. She became the Law Clerk for Mr. Justice of the in 1971-1972 while completing graduate studies at the Faculty of Law (Civil Section) of the . She was called to the Bar of Quebec in 1971 and to the in 1977. She was made a Companion to the in 2007 "for her contributions to the Canadian justice system and for her dedication to the advancement of human rights throughout the world". [cite web|url=http://www.gg.ca/media/doc.asp?lang=e&DocID=5252|title=Governor General Announces New Appointments to the Order of Canada|date=December 28, 2007|work=Governor General of Canada]

She has three children: Emilie, Patrick and Catherine Taman.

From 1972-73, Louise Arbour was research officer for the Law Reform Commission of Canada. She then taught at , , first as a Lecturer (1974), then as Assistant Professor (1975), Associate Professor (1977-1987), and finally as Associate Professor and Associate Dean (1987). She also was Vice-President of the until her appointment to the Supreme Court of Ontario (High Court of Justice) in 1987 and to the Court of Appeal for Ontario in 1990.

In 1995, Madam Louise Arbour was appointed as President of a Commission of Inquiry, under the Inquiries Act, for the purpose of investigating and reporting on events at the Prison for Women in , following allegations by prisoners of abuse.

In 1996, she was appointed Chief Prosecutor of War Crimes before the and the in . In that capacity she indicted then President for war crimes, the first time a serving head of State was called to account before an international court. Also indicted were , President of the Republic of , , Deputy Prime Minister of the Federal Republic of Yugoslavia, , Chief of the General Staff of the Armed Forces of the Federal Republic of Yugoslavia, and , Minister of Internal Affairs of the Republic of Serbia. [ [http://www.un.org/icty/ International Criminal Tribunal for the former Yugoslavia] ] [ [http://www.un.org/icty/indictment/english/mil-ii990524e.htm The International Criminal Tribunal for the former Yugoslavia: CASE No. IT-99-37] UN document] [ [http://www.un.org/icty/pressreal/p404-e.htm Statement by Justice Louise Arbour, Prosecutor ICTY] "I presented an indictment for confirmation against Slobodan Milosevic and four others charging them with crimes against humanity" in a UN press statement (JL/PIU/404-E), 1999]

Throughout her career, Arbour has published in the area of criminal procedure and criminal law, in both French and English. At various times, she has served as an editor for the "Criminal Reports", the "Canadian Rights Reporter", and the "Osgoode Hall Law Journal".

She is also the subject of a 2005 fact-based Canadian-German made-for-television movie, entitled which follows her quest to indict Bosnian war criminals. Arbour was played by Canadian actress .

In July, during the , she stated that "those in positions of command and control" could be subject to "personal criminal responsibility" for their actions in the conflict. In Arbour's full statement, she did not single out a side for war crimes. [" [http://www.unhchr.ch/huricane/huricane.nsf/view01/5AF0033D13E85EFEC12571B00061BFDE?opendocument High Comminsioner for Human Rights Calls for Protection of Civilians and Accountablity in Latest Mideast Crisis] ", 2006] However, some have taken the statement to be directed to Israel. Alan Baker, Israel's ambassador to Canada, said he "completely reject [s] Louise Arbour's warning." [" [http://www.cbc.ca/story/canada/national/2006/07/21/israeli-ambassador060721.html Israeli ambassador says Louise Arbour doesn't get it] ", 2006] . In 2006 during a trip to Israel and the occupied territories, Arbour initially refused to meet with the families of the kidnapped Israeli soldiers, Eldad Regev, Ehud Goldwasser, and Gilad Shalit, but later changed her mind following a media furor and accusations of bias. In the meeting, she offered to do "all she can" to help obtain their release. As High Commissioner she was criticized for not using this trip as an opportunity to call attention to their kidnapping. " [" [http://www.haaretz.com/hasen/spages/790900.html] "]

In Nov. 2006, Arbour met backlash for her comments on the Israel-Lebanon conflict. While visiting , an Israeli town often attacked by rockets, she was heckled and her motorcade was stoned. Asked by the Jerusalem Post [" [http://www.jpost.com/servlet/Satellite?cid=1162378470980&pagename=JPost%2FJPArticle%2FShowFull] "] if there was a distinction under human rights law between missile attacks aimed at killing civilians and military strikes in which civilians are unintentionally killed, Arbour said the two could not be equated.

“In one case you could have, for instance, a very objectionable intent - the intent to harm civilians, which is very bad - but effectively not a lot of harm is actually achieved,” she said. “But how can you compare that with a case where you may not have an intent but you have recklessness [in which] civilian casualties are foreseeable? The culpability or the intent may not sound as severe, but the actual harm is catastrophic.” [" "Ibid". [http://www.jpost.com/servlet/Satellite?cid=1162378470980&pagename=JPost%2FJPArticle%2FShowFull] "]

More recently Arbour has been accused of acquiescing in the Ugandan government's "forcible disarmament" campaign against the Karamojong minority, in which rape, torture and mass killing are widely reported. She is quoted as saying “The actions of the UPDF do not comply with international human rights law and domestic law.” But, she also stipulated, “the decision of the Government to undertake renewed efforts to eradicate illegal weapons in Karamoja is essential….” [ [http://www.reason.com/news/show/118708.html Kopel, David. "Guns Don't Kill People, Gun Control Kills People" "Reason" 23/02/2007] ]

Arbour's four-year term expired on and she did not seek a second term. [cite web |url=http://www.unhchr.ch/huricane/huricane.nsf/view01/8110FD4AAC669C5DC12574050049400C |accessdate=2008-03-22 |date= |title=Louise Arbour will not be seeking a second term as High Commissioner |work=press releases, United Nations High Commissioner for Human Rights]

[http://www.unwatch.org/site/apps/nlnet/content2.aspx?c=bdKKISNqEmG&b=1330819&ct=5761309] Examining all of her statements issued in 2007 and 2008, Arbour was found to have criticized 39 different countries, many of them ruled by regimes with poor records on human rights and democracy, including Sri Lanka, Myanmar, Pakistan, Sudan and Zimbabwe. Out of 79 official criticisms of countries that Arbour issued during this period, only 10 were dedicated to condemning free democracies. The report concluded that she was a determined advocate for the adoption of international human rights standards and that she spoke out for many victims around the world. [http://www.unwatch.org/site/apps/nlnet/content2.aspx?c=bdKKISNqEmG&b=1330819&ct=5761309]

However, the report also accused Arbour of bias against Israel. The report did not disclose any motive for the alleged bias. [http://www.unwatch.org/site/apps/nlnet/content2.aspx?c=bdKKISNqEmG&b=1330819&ct=5761309]

The attacks on Arbour by various lobby groups, including United Nations Watch, has been cited as an example of attempts to stifle legitimate criticism of Israel ["Louis Arbour: a colleague we have failed", Law Times, Vol. 19, No. 29, September 22, 2008"]

As noted by William M. Trudell, a barrister certified by the Law Society of Upper Canada as a specialist in Criminal Law, "The venomous attacks on her were over-the-top. They displayed an insecurity and cruelness by some unquestioning supporters of Israel and U.S. policy, who do not permit criticism." ["Ibid."]

* The Right to Name and Shame: Analysis of the Tenure of Former UN High Commissioner Louise Arbour, by United Nations Watch, July 2008 [http://www.unwatch.org/site/apps/nlnet/content2.aspx?c=bdKKISNqEmG&b=1330819&ct=5761309]
*
* The Canadian Television TV movie "Hunt for Justice" (2005) is a docudrama account of Mrs. Arbour's work as prosecutor for the International Criminal Tribunal for the Former Yugoslavia. Please see website at http://www.huntforjustice.com/. Film includes graphic scenes of excavations of bodies from mass graves in Vukovar,Croatia.