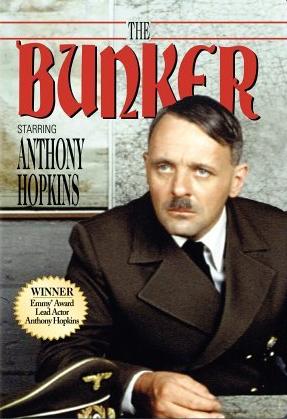 "The Bunker" is a based on the book of the same name. The movie makes significant deviations from James O'Donnell's book, mainly due to an effort to clarify the events, and allowing the actors license to interpret some of the dialogue he recorded.

The most noteworthy legacy of the film was ' portrayal of , for which he won an . Actors on the set claimed his performance was so good that those playing German soldiers snapped to attention whenever Hopkins came onto the set, even if he wasn't in character.

The interpretations of the events by the actors differ in many ways with the traditional accounts. For example, during the final meeting between Hitler and , Hopkins adopts a sarcastic tone and gestures (including mock ) that suggest that Hitler was already aware of Speer's betrayal, even though he uses the exact words recounted by the witnesses.

Also, the movie constantly shifts the point-of-view character, but sometimes in an impossible manner. For example, Dr. is used in this manner, even though he was never interviewed (having died later in 1950). Likewise, two scenes are written from the viewpoint of Hitler's cook, , and in one scene, Manziarly actually has a . However, Manziarly disappeared while escaping the bunker, so neither O'Donnell nor any other person was able to interview her or get her viewpoint.

Ironically, given O'Donnell's work on the breakout story, the movie ends just as the groups are leaving the bunker.

In a short scene at the beginning of the movie, a younger O'Donnell is played by actor . O'Donnell himself provided brief voice-over narrations at both the beginning and end of the film.