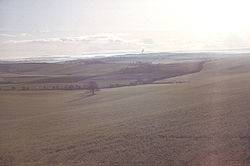 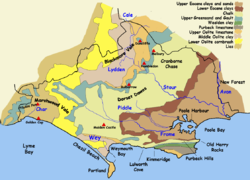 The Dorset Downs are an area of Chalk downland in the centre of the county Dorset in south west England. The downs are the most western part of a larger Chalk Formation which also includes (from West to East) Cranborne Chase, Salisbury Plain, Hampshire Downs, Chiltern Hills, North Downs and South Downs.

The Dorset Downs are bounded on the north, along the steep scarp face, by the Blackmore Vale, a large clay and limestone valley. On the east the Downs would once, thousands of years ago, have been continuous with Cranborne Chase, but the River Stour now cuts a valley between them, which is the location of Blandford Forum and the eastern boundary of the downs. From the northern scarp face, the hills dip gently southwards before the chalk disappears beneath the Bagshot Beds which form the heathlands of the county, between Dorchester and Wareham. South of the River Frome, the chalk reappears in a narrower strip, forming coastal cliffs east of Weymouth and, further east, the steep ridge of the Purbeck Hills. This southerly strip of the visible chalk (sometimes referred to as the South Dorset Downs or South Dorset Ridgeway) continues westwards behind Weymouth, and rejoins the main body of the Downs at their western extremity at Eggardon Hill. In the west the chalk dips down under Marl.

The main land uses on the downs are as arable agriculture, woodland and calcareous grassland, a habitat which is growing as farmers are encouraged with set-aside subsidies. Chalk is a rough rock and the Dorset Downs hold a large water table which acts as a reservoir of drinking water for much of the county. This property of chalk also means there are many seasonal rivers, called winterbournes, that flows depending upon the level of the water table.