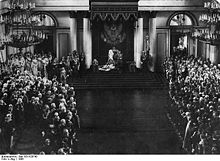 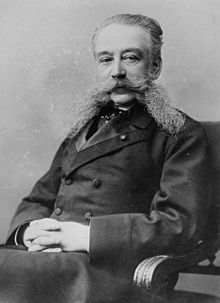 Legislative elections were held in the Russian Empire in March 1906. At stake were the 478 seats in the State Duma of the Russian Empire, the legislative assembly. Election for the First State Duma, a session which only ran from April 27 to July 21 1906, returned a significant bloc of moderate socialists and two liberal parties which demanded further reforms. For this reason, it is sometimes called the Duma of Public Anger (Дума народного гнева).

State Duma was created in a wave of violent attacks against imperial officials and public upheaval, which culminated in a national strike in October 1905 known as Russian Revolution of 1905, paving the way for Russia's first parliament. With the nation's infrastructure all but paralyzed, Emperor Nicholas II signed a historic manifesto of October 17, 1905, promising civil rights to the population and creating the Russia's first parliament.

The electoral laws were promulgated in December 1905 and introduced franchise to male citizens over 25 years of age, and electing through four electoral colleges. The elections were therefore not universal as they excluded women, soldiers, and officers. Nor were they equal since the constituencies differed greatly in size.

The general elections to the State Duma took place in March 1906 and were boycotted by the some socialist groups and the Bolsheviks. Among the political parties formed were the peasant leaders' Labour Group (Trudoviks), liberal-intelligentsia Constitutional Democratic party (the Kadets), the less liberal Union of October 17 (the Octobrists), and the positively reactionary Union of Land-Owners.

In April 1906, only weeks after the election, the government issued the Basic Law of 1906, setting the limits of this new political order. The Emperor was confirmed as absolute leader, with complete control of the executive, foreign policy, church, and the armed forces. The State Duma was shifted, becoming a lower chamber below the reformed State Council of Imperial Russia, which was Russian legislative body since 1810. Legislation had to be approved by the Duma, the Council and the Emperor to become law - and in "exceptional conditions" the government could bypass the Duma. The Basic Law introduced a special provision, Article 87, which allowed the government to ex officio issue new legislation during breaks between sessions of the State Duma. Later on, Emperor Nicholas II would frequently use this provision in order to carry out the laws that had not been supported by the State Duma.

The State Duma (and the State Council - the upper house) convened for the first time on April 27, 1906. On May 10, Sergey Muromtsev, a Law Professor at the Saint Petersburg University, was elected President of the Duma. Professor Muromtsev, a leading figure of the liberal Kadet party, tried to maintain some degree of order and dignity in this difficult assembly. He was much praised for the way he chaired the debates, always keeping to the strictest legality, but always pursuing a constitutional and anti-autocratic agenda.

The anti-autocracy was evident from the first days of the First Duma. In response to the Emperor's opening speech on May 5, the assembly called for amnesty for political prisoners, real political freedom and equality. Eight days later, the chairman of the Council of Ministers, Prime Minister Ivan Goremykin, rejected all these claims. The State Duma in turn adopted a resolution of non confidence of the government and demanded Prime Minister Goremykin's resignation. During the 72 day session of the First Duma, a total of 391 requests about illegal actions of the government were filed. Only two laws were passed: a ban on capital punishment and measures to help provinces that had been hit by a famine.

Due to the growing tensions between the State Duma and Emperor Nicholas II's Council of Ministers, prominently Prime Minister Goremykin, the assembly was dismissed by Imperial ukase after only 10 weeks, on July 21, 1906. The Emperor said that instead of drawing up laws, the deputies were investigating the authorities and thereby intruding on his authority. In a sign of frustration, members of the liberal Cadets party wanted the elected Duma to continue its work and proposed that it should retreat to Vyborg, Finland. Despite the hopes of the Kadets and the fears of the government, there was no widespread popular reaction. However, an assassination attempt on Pyotr Stolypin led to the establishment of field trials for terrorists. For signing this Vyborg Appeal, the Cadets (including Duma President Muromtsev) were arrested and imprisoned for some months - and consequently excluded from future Duma elections. This paved the way for an alternative makeup for the Second Duma of 1907.

Composition of the 1st State Duma

Jewish members of the First Duma

In total, there were twelve Jewish deputies in the First Duma, falling to three in the Second Duma (February 1907 to June 1907), two in the Third Duma (1907-1912) and again three in the fourth, elected in 1912. At the 1906 elections, the Jewish Labour Bund had made an electoral agreement with the Lithuanian Labourers' Party (Trudoviks), which resulted in the election to the Duma of two (non-Bundist) candidates in the Lithuanian provinces: Dr. Shmaryahu Levin for the Vilnius province and Leon Bramson for the Kaunas province. [1]

Two out of twelve, Grigori Borisovich Iollos (Poltava province) and Mikhail Herzenstein (b. 1859, d. 1906 in Terijoki), both from the Constitutional Democratic Party, were assassinated by the Black Hundreds antisemite terrorist group.[4]

Members of the First Duma