Accession of Serbia to the European Union

Accession of Serbia to the European Union 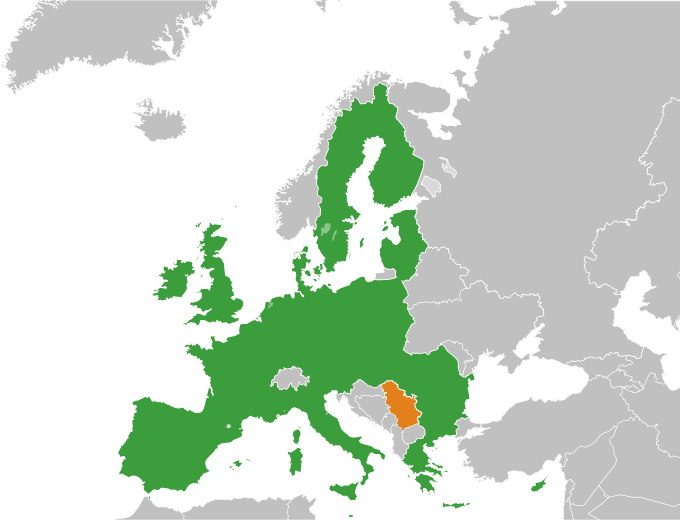 Accession of Serbia to the European Union depends on several factors. While both the and the agree that Serbia could eventually become a member of the EU, the need for internal reform both within and the EU means that Serbia will not join EU before 2012, and perhaps not before 2015.

On 7 November 2007 Serbia initialed a (SAA) with the European Union, i.e. agreed on the final version of the text to which no or little changes are to be made, which is the step immediately preceding the official signing that is expected to take place in 2008. This is a milestone in Serbia's accession negotiations, and was executed following the advice of chief war crimes prosecutor which advised the EU that the country was complying adequately with the tribunal, though that must be in prior to any official signing being able to take place. [ [http://setimes.com/cocoon/setimes/xhtml/en_GB/features/setimes/features/2007/11/08/feature-01 Serbia, EU initial SAA (SETimes.com) ] ]

Among the issues which may hinder Serbia's accession includes freedom of the media, as several governments have protested against recent threats and hate speech used against Serbian journalists. [ [http://194.8.63.155/serbia/item_1_29106.html OSCE Mission, eight embassies express concern with media situation in Serbia, call for respect for media freedom] ]

Signing of the Stabilization and Association Agreement was opposed by the Governments of the and while the Government of lobbied on behalf of Serbia. [ [http://www.b92.net/eng/news/politics-article.php?yyyy=2008&mm=04&dd=23&nav_id=49669 Spain to lobby for SAA signing] ]

The government of Serbia wants to prepare the country for EU accession between 2012 and 2015.Fact|date=September 2007 However, it seems much more likely that it would happen around 2015 due to many domestic problems and extensive reforms that should be implemented. The Serbian government has declared that the status of the region should not be tied with the EU negotiations.

The European Union notes that the conditions of Serbia access to the EU are dependent on 's full cooperation with the ,, solving the ethnic tension in the region of , dealing with in the south as well as the widespread corruption. The current institutional crisis in the EU is another delaying factor.

The has been considering enlargement in the since at least the late 1990s.

Negotiations on a started in November 2005.

On 3 May 2006, the European Union suspended SAA talks with Serbia over its failure to arrest Ratko Mladić, stating that Serbia failed to fulfill its commitment to fully co-operate with .. This slowed the pace of Serbia's EU entry and the reform process in Serbia. In July 2006, an action plan for the arrest of Ratko Mladić was issued by the government, aimed to locate and bring the former general to justice, which is expected to improve relations with EU. In May 2007, Serbian parties reached an agreement on a new government, and placed President as head of the newly created National Security Council. Within weeks of the Council's establishment, Serbian officials made two key arrests of indicted war criminals. As a result, on 13 June 2007, the European Union decided to reopen negotiations. On 21 July 2008, was arrested.

On November 8, 2007, Serbian Deputy Prime Minister and the European Union Commissioner for Enlargement initialed in Brussels the Stabilisation and Association Agreement between Serbia and the European Union. [ [http://www.seio.sr.gov.yu/code/navigate.asp?Id=106#697 The EU Integration Office > Latest News ] ]

Olli Rehn said that the EU decision to initial the Stabilisation and Association Agreement with Serbia was the result of improved cooperation with the ICTY, as reported by the chief prosecutor of this Tribunal, .

Rehn underlined that full cooperation of Belgrade with the ICTY remains a precondition for signing of the Stabilisation and Association Agreement, which was initialed two years after the launching of the first negotiation round. On 16 January 2008 the and confirmed that their countries would not sign the SAA (signatures are needed from all EU member states) until Serbia complied fully with the ICTY. [ [http://www.eubusiness.com/news-eu/1200499324.24 Netherlands stands firm in opposing deal for Serbia] ] On 14 January ICTY prosecutor confirmed that there was no change and Serbia was still not fully cooperating. [ [http://www.reuters.com/article/latestCrisis/idUSL14167214 No change in Serbia cooperation view-new prosecutor] ]

Kosovo's provisional government unilaterally declared independence from Serbia, on 17 February 2008. This was followed by several countries recognizing Kosovo as independent country. These events heavily influenced Serbian political landscape, and eventually led to the fall of Serbian government in spring 2008. The central topic on which the coalition partners diverged was Serbia's EU accession.

On 4 April 2008, Serbian Prime Minister , supported by , Minister of Infrastructure, stated that EU membership is no longer on agenda for Serbia. Koštunica said that that before EU accession continuation Serbia and EU must discuss the matter of borders and Serbia’s territorial integrity. [ [http://www.b92.net/eng/news/politics-article.php?yyyy=2008&mm=04&dd=04&nav_id=49087 Koštunica: EU membership not on agenda] ] He said that Serbia must not by no means sign the Stabilisation and Association Agreement. He referred to the agreement as "Solana's agreement". [ [http://www.mtsmondo.com/news/world/text.php?vest=93149 Koštunica: Nikako ne potpisati SSP] ] [cite web|url=http://www.balkaninsight.com/en/main/news/9356/ |title=Serb President 'should resign' over EU deal |publisher=Balkan Insight] [ [http://www.b92.net/eng/news/politics-article.php?yyyy=2008&mm=04&dd=21&nav_id=49620 "SAA not in Serbia's state interests"] ]

At the same time President said that the Vienna Convention allows him to sign the agreement and that he will sign it if it is offered. [ [http://www.b92.net/eng/news/politics-article.php?yyyy=2008&mm=04&dd=11&nav_id=49298 Tadić to sign SAA, if offered] ] , Deputy Prime Minister, has been previously authorized by the Government to sign the agreement and is still willing to do so. [ [http://www.seebiz.eu/en/politics/tadic-i%E2%80%99ll-sign-saa-on-april-28,12846.html Tadić: I’ll sign SAA on April 28] ]

Deputy Prime Minister, signed the Stabilization and Association Agreement on 29 April 2008. The ceremony in was attended by the President and the Foreign minister . [ [http://www.b92.net/info/vesti/index.php?yyyy=2008&mm=04&dd=29&nav_category=11&nav_id=296162 Srbija potpisala SSP sa EU] ]

After the , a new parliamentary majority and government was formed, and the SAA opposition was left without a political power. A new Serbian Prime Minister, announced “"One of the first moves of the new government will be to submit the Stabilization and Association Agreement with the European Union to the parliament for ratification"” [ [http://www.b92.net/eng/news/politics-article.php?mm=7&dd=7&yyyy=2008 Parliament elects new government] ] . On September 9 2008, a Parliament of Serbia have ratified the Stabilization and Association Agreement (SAA) with the EU. The European Commission (EC) welcomes the ratification of the Stabilization and Association Agreement (SAA) by the Serbian parliament [ [http://www.b92.net/eng/news/politics-article.php?yyyy=2008&mm=09&dd=09&nav_id=53326 Parliament ratifies SAA] ] .