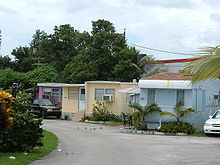 A trailer park is a semi-permanent or permanent area for mobile homes or travel trailers. The main reasons for living in such trailer parks are the often lower cost compared to other housing, and the ability to move to a new area more quickly and easily, for example when changing jobs to another part of the country taking the mobile home/trailer with them. Ironically, this type of housing is very profitable for the manufacturers.Warren Buffett made a substantial portion of his fortune as the world's richest business man, by manufacturing trailer homes.[citation needed]

Trailer parks, especially in American culture, are stereotypically viewed as lower income housing whose occupants live at or below the poverty line, have low social status and lead a desultory and deleterious lifestyle. Despite the advances in trailer home technology, the trailer park image survives, evidenced with stereotypical ignorance in a statement by Presidential adviser James Carville in the course of one of the Bill Clinton White House political scandals, "Drag $100 bills through trailer parks, there's no telling what you'll find"," regarding Paula Jones.[1] It is also seen in the Canadian mockumentary Trailer Park Boys.

Tornadoes and hurricanes often inflict serious damage on trailer parks, usually because the structures are not secured to the ground and their construction is significantly less able to withstand high wind forces than regular houses. However, most modern manufactured homes are built to withstand high winds as well as a mainstream home, using hurricane straps and proper foundations. 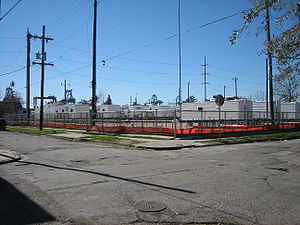 New Orleans after Hurricane Katrina: A park in an unflooded part of town has been turned into FEMA trailer park for people whose homes were damaged or destroyed.

This perception of trailer parks was not improved by the creation of emergency trailer parks by the Federal Emergency Management Agency (FEMA) for the displaced victims of Hurricane Katrina, the quality and temporary nature of which was disputed.[2] Many stereotypes have developed regarding people who live in trailer parks, which are similar to stereotypes of the poor and the term Trailer trash often used as an adjective in the same vein as the derogatory American terms white trash or ghetto. Though trailer parks appear throughout the United States, they are often associated with the Deep South and rural areas.

More recently referred to in the U.S. as mobile home communities or manufactured housing sites, the stereotypes are often just that. Retirement communities exist in many locales that permit mobile home parks as "over-50 parks". Homeowners must be over the age of 50 and persons under the age of 21 are rarely permitted to live there. These can be gated communities with amenities such as swimming pools, clubhouses and on-site maintenance. Homes are often permanently installed on foundations. However, in certain circumstances residents may not own the land their homes occupy.

In Europe, particularly in Germany and Spain, where trailer parks are less common (but exist) as 'normal' accommodation, disputed trailer parks exist that squat on land near urban centers (Berlin, Hamburg, Barcelona). Names for such phenomena include Wagenburg, Wagendorf or Bauwagenplatz (all German, meaning: "wagon fort", "trailer village" and "construction trailer place" respectively) and people living there are often associated with certain ethnic groups such as romani, or with the punk movement, New age travelers, Irish travelers and a do-it-yourself punk ethic. On the whole, however, trailer parks are much less common in these countries than they are elsewhere and in North America and are much less emblematic of a distinct lifestyle and membership to a certain social class.

In Germany and other European countries also exist a lot of normal camping places for short time and season camping, and also long-time camping (for years) with hardly movable travel trailers. Sometimes the inhabitants even cultivate a garden. Some cities allow a long-time camping lot to be regular address registered with the authorities.

In the United Kingdom, "trailers", or mobile homes are generally used for one of two purposes. Firstly as holiday homes, designed for short-term living. And secondly as retirement homes for the elderly, designed for long-term occupancy. Both types of trailers usually enjoy good amenities and are surrounded by highly manicured gardens.

In France, living in a trailer or mobile home for more than three months is prohibited by law, even if the resident owns the land.

In Australia, there is generally no differentiation between a trailer park and an RV park. The term "caravan park" is used to refer to both.