The Nakajima G8N Renzan (連山, "Mountain Range") was a four-engine long-range bomber designed for use by the Imperial Japanese Navy. The Navy designation was "Type 18 land-based attack aircraft" (一八試陸上攻撃機); the Allied code name was "Rita".

The initial prototype was completed in October 1944 and delivered to the Navy for testing in January 1945, a mere one year after the Navy ordered development to start. Three further examples were completed by June 1945, with the third prototype being destroyed on the ground by US carrier aircraft.[2]

Other than minor problems with the turbosuperchargers, the Renzan performed satisfactorily and the Navy hoped to have a total of 16 prototypes and 48 production-version G8N1s assembled by September 1945. But the worsening war situation and a critical shortage of light aluminum alloys led to the project's cancellation in June.[2]

Just prior to Japan's surrender in August 1945 consideration was also briefly given to producing an all-steel version of the aircraft, to be designated G8N3 Renzan-Kai Model 23, but the cessation of hostilities precluded any further development.[2]

After the war, one prototype was taken to the United States[3][4] and scrapped after testing. None are in existence today. 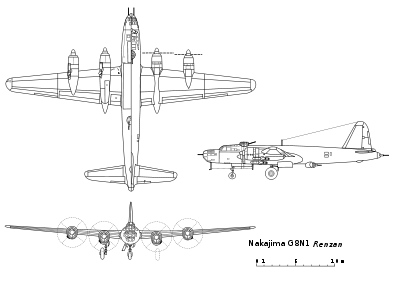 Data from Japanese Aircraft of the Pacific War[2]