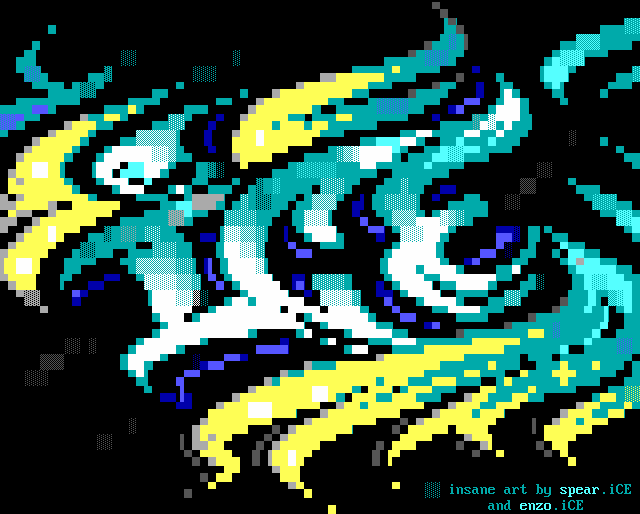 
iCE Advertisements is a group formed in 1991. Although the expanded title is rarely ever used, iCE is an acronym for "Insane Creators Enterprise". iCE, along with , has been one of the most prominent and critically successful groups on the underground computer artscene.

The group originally specialized in the creation of work for BBSes and graphics. During the BBS-era, their biggest competitor was .

The ANSI was in a continual state of flux, with intense rivalry between artists and groups. In addition, ansi artists tended to switch loyalties often, moving from group to group. Groups would merge and restructure, or completely disband, but iCE was generally viewed by regulars as one the more stable groups. iCE was known to have particularly effective artistic leadership, and benefited from early leaders such as .

iCE, like their peers in the , released artwork on a monthly basis in the form of an . iCE released their first monthly , referred to as an "iCEpack", in August of 1992.

During the transition between BBS to the , interest in iCE began to wane somewhat during the late 1990s. This was quickly reversed after the introduction of their well received [http://tiles.ice.org Tiles] art project in December 2000.

Today, iCE has branched out into art, and with members worldwide. Although iCE has continued to release monthly galleries of art to this day (as of 2005), they abandoned the traditional format after the release of their July 2002 artpack (dated August 6, 2002) in favor of an online presentation via their website. On occasion, however, iCE continues to include ANSI artwork as part of their monthly showcase of new art.