Chengdu Metro, commonly known as Metro in Chengdu, (Chinese: 成都地铁; pinyin: Chéng​dū​ dì​tiě​) is a metro system in Chengdu, the capital city of Sichuan Province in China. It has one line, Line 1, which was constructed between December 2005 and 2010 (trial operation in March 2010 and formal opening on 27 September 2010). It is operated by Chengdu Metro Limited Liability Company. On September 27, 2010 Chengdu Metro was officially opened, making it the first all-Heavy Rail metro system in western China.[1]

Chengdu is in a tie with Shenyang as the 9th major city in the People's Republic of China to have a functioning metro system, after Beijing, Chongqing, Guangzhou, Nanjing, Shanghai, Shenzhen, Tianjin and Hong Kong.

There will be five lines constructed in the first phase, covering 126 km with 116 stations including 11 interchange stations. Line 1 has 17 stations at along the 18.5 kilometre route, starting at Shenxian Lake and ending at Century City. 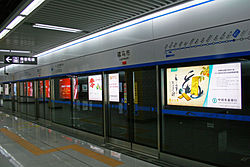 There will be 22 sets of three cars each when the line opens, made by CSR. The trains will be air-conditioned and can hold up to a maximum of 1,200 people. The cars will be 2.8m wide and 19m long. In the future, trains will be expanded to five cars. The rolling stock's average train speed will be 35 km/h and its maximum speed will be 80 km/h. The metro system will be equipped with Automatic Train Protection, Automatic Train Control, Automatic Train Stop and Automatic Train Operation. Fire alarms, on-train/track systems, and automatic fare collection systems will also be installed. A minimum curve radius of 400m will be used where possible, though some restricted areas will have a curve radius of 300m. The maximum gradient will be 35% and the railway tracks will be laid to standard gauge (1435mm) using 60 kg/m rail, allowing a maximum speed of 80 km/h. The power supply will be 750V DC with third rail collection and running rail return.[4]

Seven lines are planned to be constructed over the next thirty years and five have been planned so far, with all around the city centre. When the whole of Line 1 is completed, it will have a length of 31.6 km with 22.44 km of underground tracks and 9.16 km of tracks at either ground level or elevated with 23 stations. There will be a depot at Huayang, two main substations, ten traction substations and one control centre. Line 1 will interchange with Chengdu North and Chengdu South railway stations.[4]