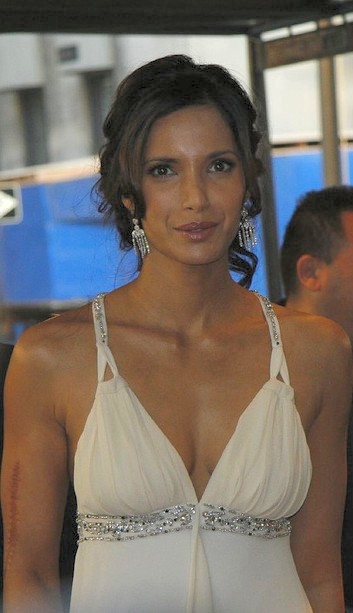 Padma Parvati Lakshmi, Lady Rushdie [ [http://www.imdb.com/name/nm0482290/ Padma Lakshmi ] ] (born , ) is an Indian American , , and former model who has described herself as the first well-known model from India.

Padma was born in the state of , India, on September 1, 1970, though she grew up in Madras, . However, Padma spent most of her adolescent life in the United States.

Her parents' only child together, Lakshmi is the daughter of an executive with and his first wife, Vijaya,

When she was 14 years old, she was involved in a serious automobile accident, causing an injury of her right arm, which required surgery leaving a 7 inch scar, between her elbow and shoulder. The accident happened on a Sunday afternoon on her way back with her parents from a temple in Malibu. She remembers a loud bang, looking out the windshield and realizing the family's red Mercury Sedan was airborne. Padma describes the event in the Vogue-April 2001 edition as "Flying in a car felt like an exhilarating hallucination, an unbelievable ride that oddly remains one of the most beautiful images in my memory." The car flew 40 feet down an embankment directly into a tree. The tree trunk fell directly on top of the car. She remained conscious, covered in glass, for the 40 minutes it took for the paramedics and firefighters to get through the traffic. They used the "" to extract the family from the crumpled car. A helicopter landed in the middle of the highway to air lift her parents away while an ambulance carried Padma to the hospital. Fortunately, everyone survived. Her injuries included a fractured right hip and a shattered upper right arm which resulted in her famous 7-inch scar.

By a later marriage of her father's, Lakshmi has a half-brother and a half-sister, who was an actress and classical dancer but is now pursuing a career with special-needs children. As Lakshmi said in an interview published in "", "My father had quit his job as an executive at Pfizer to manage her career. That was kind of like rubbing salt in the wound. I didn't understand why he wanted that relationship with her, and not with me."

Lakshmi was brought up as a [ [http://www.lakshmifilms.com/padma_lakshmi_press22.htm Padma Lakshmi — Crossover Bride, L'Officel India ] ] and has admitted that because of this, she sometimes becomes "squeamish" when sampling other cultural delicacies. ["Almost Flawless" by Padma Lakshmi. "Vogue", April, 2001. http://www.lakshmifilms.com/padma_lakshmi_press2.htm] ""'

Lakshmi's career began at age 20, when she was discovered by a modelling agent in while sitting in a café. As she has stated, “I was the first Indian model to have a career in Paris, Milan and New York. I’m the first one to admit that I was a novelty.” Despite Lakshmi's comment about her being a pioneer as a model of Indian descent, her career follows in the footsteps of , a former , who modelled for .

She has modelled for top designers such as , , and and done ad campaigns for and . [ [http://www.bravotv.com/Top_Chef_2/bios/padma_lakshmi.shtml Padma Lakshmi Bio] Bravotv.com] She was a favorite model of the photographer , whose photographs of her often highlighted the large scar on her right arm.

Lakshmi had a comical supporting role as the lip synching disco singer Sylk in the 2001 American movie "Glitter" with . She co-starred with and in the 2003 Hindi action box office failurefact|date=July 2008 "Boom" as Shiela Bardez, one of a trio of super models accused of stealing diamonds. Lakshmi was last seen on screen as "Geeta" with and in ' 2005 film "The Mistress of Spices". She will be starringfact|date=July 2008 in Oscar-nominated director 's upcoming 2007 film, which was earlier titled "Exclusion".

Padma Lakshmi made a 2002 guest appearance as alien princess Kaitaama in "", the 37th episode of the science fiction TV series "". She was also hostess of "", 's top-rated television show.fact|date=July 2008 She portrayed 's nemesis in the 2004-2005 TV series "Sharpe's Challenge". In 2006 Lakshmi appeared in ABC's TV series "The Ten Commandments" with , , and . She took over as hostess of the popular TV cooking competition series "" in 2006 during its second season and has continued in its third and fourth seasons.

Lakshmi was named number 66 on AskMen.com's "The Top Most Desirable Women of 2008" list.

Her first cookbook "Easy Exotic" was awarded Best First Book at the 1999 World Cookbook Awards at . She was host of the series, "Padma's Passport", which is part of the larger series "Melting Pot", in 2001. She has also been a guest host on parts of the British culinary tourism show "Planet Food", hosting the segments on India and . [ [http://www.bbc.co.uk/food/tv_and_radio/planetfood_index.shtml BBC - Food - TV and radio ] ] Her second cookbook "Tangy, Tart, Hot and Sweet" was released October 2, 2007 ["Amazon.com" [http://www.amazon.com/Tangy-Tart-Hot-Sweet-Recipes/dp/1602860068 Tangy Tart Hot and Sweet: A World of Recipes for Every Day (Hardcover)] ] .

On , , in , Lakshmi married the novelist , to whom she was introduced at a party hosted by the journalist and editor . On , the couple filed for divorce, shortly after Rushdie was granted a . [ [http://www.eonline.com/news/article/index.jsp?uuid=ed1a664d-9538-487b-9f0b-9bc4b4e5330c E! News - Rushdie, Top Chef Wife Skewer Marriage ] ] She is the model for one of the central characters -- and love interests -- in Rushdie's novel, "Fury" (a novel dedicated to her as well).

When questioned about Rushdie's age (he is seven years younger than her father) and her long estrangement from her father (whom she has described as "the most sexy, manic, in-shape, lean, tall, handsome man I have ever met"), Lakshmi has said that there may be a correlation: “I think that we are attracted to what we feel we need." [ [http://www.lakshmifilms.com/padma_lakshmi_press43.htm Padma Lakshmi &mdash; Evening Standard Magazine April 7, 2006] ]