His family was of fairly modest origins and cannot be traced back with any certainty further than the late Tang dynasty. His ancestor Zhao Ting (828-874) was an official who served in Zhuozhou, in Hebei near where the family lived. His sons, Zhao Ting (851-928) and Zhao Jing (872-933), also served as local officials in Hebei. Zhao Jing's son Zhao Hongyin (趙弘殷) (899-956) decided against a civil career and became a military officer instead under Emperor Zhuangzong of Later Tang (后唐莊宗): he knew that in times of disunity it would be a military career that will lead to success.[clarification needed]

As a result, Zhao Kuangyin was trained in martial arts and in the art of war. He started training as a child, and showed strong preservence. According to legend he was said to have found an untamed horse to practice his archery skills. The horse threw him off its back and onto the wall. Everyone was shocked, because one would be expected to sustain a serious injury, but Zhao Kuangyin got right back up and chased the horse. Eventually, it was subdued, while Zhao Kuangyin went unharmed.

At the age of twenty-one, after his father started to lose his position in the government because of the death of Tang Zhuangzhong, Zhao Kuangyin decided to leave as he knew that with his father's declining influence, he would not be successful. He would wander around various settings in society for two years, which would mold Zhao Kuangyin's broad view on social life. It was said that one day a Daoist at a monastery in Xiangyang saw that Kuangyin, despite his beggar-like dressing, had an unusual aura. He was told to go to the North where there were wars, where he could fight and become famous as the south at the time was too stable.

Zhao Kuangyin's career started at the Battle of Gaoping, against the alliance of the Northern Han and the Liao.

This rivalry started when Zhou Shizong ascended the throne and Liu Min (劉旻)decided to work with Liao. In the initial confrontation, the army's right flank, led by Fan AiNeng (樊愛能) and He Wei (何微), was defeated. Looking at the situation, Kuangyin and Zhang Yongde (张永德) led 4000 elite Palace troops to counter the Liao army. Zhao Kuangyin's exhortation for the loyalty to the emperor quickly strengthened morale. The small force held off the larger Liao army until reinforcements arrived. In the end, the successful counter repelled the Northern Han back to Taiyuan.

The victory raised Kuangyin up to the post of the grand commander of the Chief of the Palace troops, as well as reorganizing and training them. More importantly, he developed the relations with other generals and officials related to the Chief of Palace including Shi Shouxin (石守信), Wang Shenqi (王審琦), Yang Guangyi (楊光義), Wang Zhengzhong (王政忠), Liu Qingyi (劉慶義), Liu Shouzhong (劉守忠), Liu Yanrang (劉延讓), Mi Xin (米信), Tian Chongjin (田重進), Pan Mei (潘美), Zhao Kuangyi (his brother), Shen Yilun (沈義倫), Lu Xuqing, Zhao Pu (趙普), Chu Zhaobu (楚昭捕). Within a few years, Zhao Kuangyin completely controlled the Chief of the Palace Troops and even developed a set of officials under him with the people mentioned above.

Soon, he was promoted to a jiedushi, controlling the most of the military power under Zhou Shizong. Nevertheless, he still had two rivals - Zhang Yongde and Li Chongjin (李重進), who were both Zhou Taizu's son-in-laws. In 959, after a trap set by Kuangyin, Zhang Yongde was demoted. After the deaths of Zhang Yongde and Zhou Shizong (the last competent Later Zhou Emperor, r. 954-960) on the throne was it was left to his 7-year-old son, and the second rival, Li Chongjin, he soon found himself lacking the political backing. As a result, Zhao Kuangyin was able to use his influence to transfer Li Chongjin to the Yang Prefecture as a jiedushi.

In 960, word reached the prime minister Fang Zhi that Northern Han and Liao were once again allied to invade them again. Without verifying the liability of the hearsay, Fang Zhi sent Zhao Kuangyin to combat the alliance. After traveling 40 li, there was a clamor that a "prophet" saw 2 suns fighting, and that this meant the transfer of the Heaven's Mandate onto Zhao Kuangyin. The story effectively spread around the army: there came discontent of the "command" of the young emperor and a shift of loyalty to Zhao. A few days, when Kuangyin was drunk in his tent, all the troops have not slept the whole night; they got their weapons and started yelling. Zhao Pu and Zhang Kuangyi, who were guarding the tent, saw the situation and went into the tent to wake up Kuangyin. When Kuangyin came out, all the troops yelled, "The army is without a master, we're willing to make commander the new emperor." Allegedly, Zhao Kuangyin took the power reluctantly, only under the urging of his soldiers. News of the rebellion soon reached the court and erupted chaos. The only person who thought about a resistance was Han Tong, but he was killed by one of Kuangyin's generals when he reached home.

With the gate open for Zhao Kuangyin, he became emperor with no resistance. Before the prime minister Fang Zhi could say anything, one of Kuangyin's generals pointed a sword at Fang Zhi and said, "We're without masters. Today, we must have an emperor." After the officials looked at each other and knew it was hopeless to resist, they all bowed down. With the court under control, Kuangyin was officially proclaimed Taizu, the emperor of Song. The new dynasty name was taken after the army he controlled in the Song Prefecture.

After the declaration, he sent the dethroned young emperor with his mother to Xi Jing (西京). He personally ordered the Zhao family to receive the Chais into their family's care for generations. 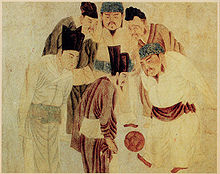 In 960, Song Taizu helped reunite most of China after the fragmentation and rebellion between the fall of the Tang dynasty in 907 and the establishment of the Song dynasty. The plan set during Zhou Shizong's period was to first conquer the North, then the South. During Taizu's period, there was a change in strategy. He would conquer all the small countries such as Shu, South Han, and South Tang. The exception was the strong Northern Han in the north at Taiyuan supported by the Khitans. Taizu's strategy was to first take the Southern territories because the South was weaker than the North as the Liao supported Northern Han.

He established the core Song Ancestor Rules and Policy for the future emperors. He was remembered for his expansion of the examination system such that most of the civil service were recruited through the exams (in contrast to the Tang where less than 10% of the civil servants came through exams). He also created academies that allowed a great deal of freedom of discussion and thought, which facilitated the growth of scientific advance, economic reforms as well as achievements in arts and literature. He is perhaps best known for weakening the military and so preventing anyone else rising to power as he did.

He reigned for seventeen years and died in 976 at the age of forty-nine. Curiously, he was succeeded by his younger brother even though he had two grown sons - Zhao Dezhou, Prince of Yan (951-979) and Zhao Defang, Prince of Qin (959-981). This mode of succession was common among the nomadic peoples who lived in the north (such as the Khitans and the Tanguts) but it was not common in Chinese history. The traditional historical accounts place emphasis on the role Zhao Kuangyin's mother played in the decision which was made shortly after the Song Dynasty was proclaimed (around 961). So for nearly his entire reign, it was known and accepted that his brother would succeed him.

According to martial arts traditional lore, the Emperor Taizu created a Shaolin-based fighting style known as Tàizǔ Chángquán (太祖長拳; literally "Emperor Taizu long fist"). It is the core style of modern day Long Fist. Whether he really did invent this style or if it even dates from this time is not actually known.[1]