Nazaré (Portuguese pronunciation: [nɐzɐˈɾɛ]) is a town in Nazaré Municipality in Portugal with a total area of 82,4 km² and a total population of 14,904 inhabitants. It is in subregion Oeste and Leiria district. 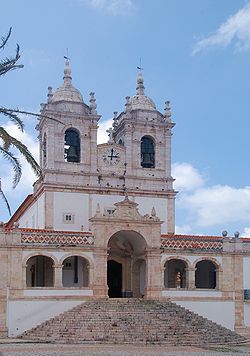 It has become a popular tourist attraction, advertising itself as a picturesque seaside village. Located on the Atlantic coast, it has long sandy beaches (considered by some to be among the best beaches of Portugal), crowded with tourists in the summer. The town used to be known for its traditional costumes worn by the fishermen and their wives who worn the traditional headscarf and embroidered aprons over seven flannel skirts in different colours. These dresses can still occasionally be seen.

The town consists of three sections: Praia (along the beach), Sítio (an old town, on top of a cliff) and Pederneira (an old town, on a hilltop). The Praia and the Sítio areas are linked by the Nazaré Funicular, a funicular railway.

The original settlements were in Pederneira and in Sítio above the beach. They provided the inhabitants with safe bases against raids by Algerian, French, English and Dutch pirates that lasted until as late as the beginning of the 19th century.

According to the legend of Nazaré, the town derives its name from a small statue of the Virgin Mary, a Black Madonna, brought by a monk in the 4th century from Nazareth, Syria Palaestina to a monastery near the city of Mérida, Spain and brought to its current place in 711 by another monk accompanied by Roderic, the last Visigoth king. After their arrival at the seaside they decided to become hermits. The monk lived and died in a small natural grotto, on top of a cliff above the sea. After his death and according to the monk's wishes, the king buried him in the grotto where he left, on an altar, the statue of the Black Madonna.

The first church in O Sítio, was built over the grotto to commemorate a miraculous intervention (1182) by the Virgin Mary in saving the life of the 12th century Portuguese knight Dom Fuas Roupinho, possibly a templar, while he was hunting deer one foggy early morning. This episode is usually referred to as the legend of Nazaré. In memory of the miracle he had a chapel (Capela da Memória) built over the small grotto, where the miraculous statue had been left by king Roderic after the monk's death. Beside the chapel, on a protuberant rock 110 meters above the Atlantic, one can still see the mark made in the rock by one of the hooves of Dom Fuas' horse. This episode is usually called The Legend of Nazaré.

In 1377, King Fernando I of Portugal founded a new more spacious church which was totally transformed between the 16th and 19th centuries. The Church of Nossa Senhora da Nazaré is a rich baroque building, with splendid tiles on its interior. Behind and above the main altar visitors can see and venerate the miraculous image of our Lady of Nazaré.

Overview over the beach of Nazaré during a winter afternoon

Nazaré is twinned with: