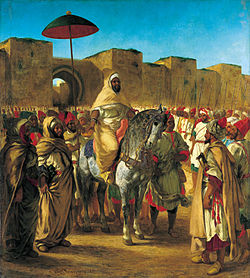 The Sultan Abderrahmane of Morocco, by Eugène Delacroix.

He was born in 1778. His reign began at the start of the French occupation of Algeria. Morocco supported the Algerian resistance movement led by the Algerian Emir Abd al-Qādir al-Jazā'irī during this period.

In 1856, Moulay Abderrahmane established the souk of Zraqten on the north side of the High Atlas, adding to territory in southern Morocco controlled by the Glaouis, who were caids ruling various southern areas from the 18th century until Moroccan independence in 1956, after originally settling in Telouet to establish a souk. They would tax caravans travelling from the Sahara and Tafilalt regions as well as taxing goods sold locally.

The Agdal Gardens of Marrakesh, an irrigated garden, originally established by the Almoravids in the 12th century and enlarged in the days of the Saadians was revamped and encircled by ramparts during the reign of Moulay Abderrahmane.

Abderrahmane was succeeded by Mohammed IV of Morocco.