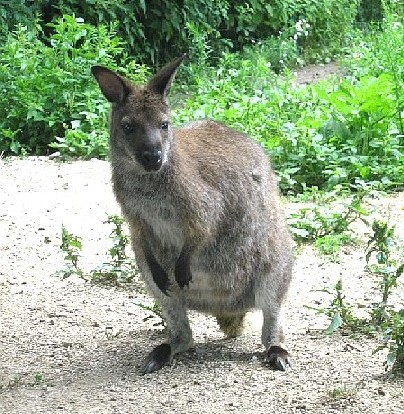 A wallaby is any of about thirty species of (Family Macropodidae). It is an informal designation generally used for any macropod that is smaller than a or that has not been given some other name.

Wallabies are widely distributed across , particularly in more remote, heavily timbered, or rugged areas, less so on the great semi-arid plains that are better suited to the larger, leaner, and more fleet-footed kangaroos. They are widespread in , where they are often hunted. There are also a few populations of wallabies in the British Isles all having escaped from zoos, the largest of which can be found on the where there is a breeding colony of around 100. [Harby, A.P.B.: " An Assessment of the Ballaugh Curragh Wallaby Population", 2008.]

Wallabies are not a distinct biological group. Nevertheless they fall into several broad categories. Typical wallabies of the "" genus, like the ("Macropus agilis"), and the ("Macropus rufogriseus") are most closely related to the kangaroos and wallaroos and, size aside, look very similar. These are the ones most frequently seen, particularly in the southern states.

Rock-wallabies (genus "Petrogale"), rather like the s of the northern hemisphere, specialise in rugged terrain and have modified feet designed to grip rock with skin friction rather than dig into soil with large claws. There are at least fifteen species and the relationship between several of them is poorly understood. Several are endangered. Captive rock wallaby breeding programs like the one at have had some success and a small number have recently been released into the wild.

The ("Lagostrophus fasciatus") is thought to be the last remaining member of the once-numerous subfamily Sthenurinae, and although once common across southern Australia, is now restricted to two islands off the Western Australian coast which are free of introduced predators. It is not as closely related to the other hare wallabies (genus "Lagorchestes") as the hare wallabies are to the other wallabies.

, which was until fairly recent geological times part of mainland AustraliaFact|date=August 2008, has at least five species of wallaby.

Wallabies are an introduced species in , where they are considered a pest. A program to reintroduce them to has met with limited success. [http://www.doc.govt.nz/upload/428/joey-award.pdf]

Additionally, a small feral population of wallabies is known to exist in , in the upper regions of Kalihi Valley of the island of . [http://www.earlham.edu/~biol/hawaii/mammals.htm] This colony arose from an escape of zoo specimens of ("Petrogale penicillata") in 1916.

A number of wallaby breeding colonies in other parts of the world have been established at times in the past, but only one proved viable. The two principal populations were those of the island of in , and in the of . The Peak District population was established in around 1940 by five escapees from a local zoo and lasted until at least 1993. At its peak the population numbered around fifty individuals. The Loch Lomond population was deliberately established in 1975 and unmanaged has achieved a viable population of around 28. Restricted to the island of Inchconnachan there are occasional escapes to the mainland when the loch freezes over. Other populations in the United Kingdom that for some periods bred successfully included one near , , another in the , and one on the island of Bute and Lundy.

There is also a small population on off the east coast of . This group was introduced by Dublin Zoo after a sudden population explosion in the mid 1980s.

As mentioned above, the term "wallaby" is ill-defined and can mean just about any macropod of moderate size. In consequence, the listing below is arbitrary and taken from the complete list of macropods.

* Rocko from "".
*Wallaby, or "Warabi", a stuffed Wallaby doll from the manga of the same name.