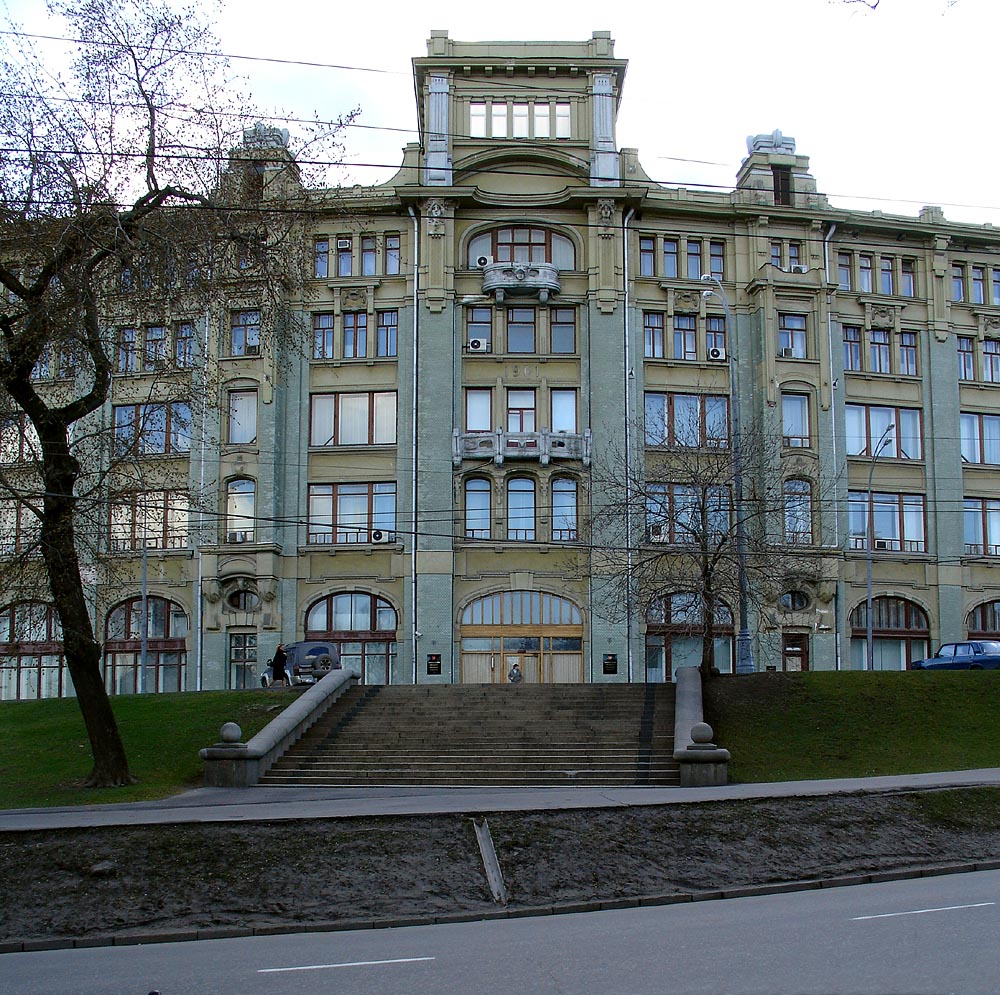 Fyodor Osipovich Schechtel ( _ru. Фёдор Осипович Шехтель, - ) was a n , graphic artist and stage designer, the most influential and prolific master of Russian and late .

Baptised as Franz Albert Schechtel (also transliterated as Shekhtel), he created most of his work as Franz Schechtel (Франц Шехтель), changing his name to Fyodor with the outbreak of . In two decades of independent practice he completed five theaters, five churches, 39 private residences, and various other buildings, primarily in Moscow. Most of his legacy survives to date.

Franz Schechtel (Russified as Fyodor Osipovich) was born to a family of engineers in , the second of five children. His parents were of . His mother, born Daria Karlovna Zhegin, came from a family of Saratov merchants. Schechtel's uncle on his father's side, also named Franz Schechtel, was an established businessman in Saratov. He is credited with building the first theater in Saratov. See also [http://all-photo.ru/empire/index.ru.html?kk=cfa3d48a4f&big=on&

The Schechtel family relocated to Saratov in 1865 to assist the ailing Franz Sr. in business. Both brothers, Franz Sr. and Osip, died in 1867. Business debts ruined their families, forcing Daria Karlovna to seek free boarding schools for the children; she relocated to Moscow and worked for . Franz attended a free Roman Catholic in Saratov, graduating in 1875. However, he received his high school diploma only in 1880, when he was drafted into the Russian Imperial Army (Schechtel was eventually relieved from service).

In 1875 Schechtel arrived in Moscow and attended architectural classes at the . He was expelled in 1878 for "bad attendance." 19-year-old Franz made his living by assisting architect (a relative of ), in painting s, church es and daily illustrations for newspapers and magazines. There he met author and playwright and his brother Nikolai Chekhov. Schechtel illustrated a book for Chekhov in 1886, who then recommended Schechtel to other clients. This experience (as well as the Tretyakov connection) familiarized Franz with Moscow's artistic circles and the wealthy patrons of the arts who would become his future clients, notably the Morozov family of .

Throughout the 1880s, Schechtel completed many theatrical stage designs; most of his graphics from this period have been lost, excluding a small fraction stored at the Bakhrushin Museum in Moscow.

Schechtel obtained a construction management license in 1894. His earlier projects, completed under Kaminsky's management, are sometimes credited to Kaminsky alone. Schechtel's first own, undisputed building - Zinaida Morozova House in Spiridonovka Street, 1893, famous for artwork - is a mix of and . His style during the 1890s meanders between Gothic and . The first sign of a new, mature style (a Russian version of , "Russky Modern"), appears in his 1899 Arshinov House in Malaya Ordynka Street.

Schechtel's turn to Art Nouveau is associated with the 1900 Levenson Printshop in Trekhprudny Lane, in , a well-to-do neighborhood near Moscow's center. Patriarshy Ponds is still home to many of Schechtel's works, including two of his own residences from 1896 and 1910. Schechtel designed the Printshop to have Gothic trim, but changed his plan midway through construction. His "Popov Tea House" pavilion at the in Paris earned a silver medal, exposing him to international fame ( [http://all-photo.ru/empire/index.ru.html?kk=1094fc9186&big=on&

Unlike his rival , Schechtel never committed himself to a single style. His Yaroslavsky Terminal and Ryabushinsky House are distinct, setting two trends of Schechtel's future work: the internationalized, refined Art Nouveau and the last round of Russian Revival before the Revolution of 1917.

In the aftermath of the the Russian government lifted all limitations on , and they responded by commissioning churches to be built all over the country. In 1909 Schechtel won an open contest to construct church in , financed by the Balakovo-based Maltsev brothers. By this time, Schechtel (a Roman Catholic) had firmly established himself within the Old Believer community, having done previous projects for the Maltsevs. Schechtel designed an eight-faceted , borrowing elements from the style of the Church of Ascension at in Moscow and older architectural traditions of the Russian North. The church, which could accommodate 1,200 worshippers, was completed in 1912, but was later destroyed during the Soviet period. It is now being rebuilt by the ).

After 1905, Schechtel was famous for his office buildings, applying Art Nouveau concepts to steel frame structures, notably the 1907 Ryabushinsky Printshop in Putinkovsky Lane ( [http://mosmodern.race.ru/p003.html photographs, floorplan] ) and the 1909 Merchant's Society offices in Cherkassky Lanes ( [http://mosmodern.race.ru/d010.html photograph, floorplans] , the latter damaged by inadequate replacement of the original windows). Emphasis on the top floor ornamentation, witnessed in the Merchant Society Building, became a key feature in the so-called "Rationalist Modern" trend in commercial architectural design. In 1909 Schechtel turned to Neoclassical Revival, building his own (third) residence on the in strict . He began taking more commissions outside Moscow, notably in , his hometown of Saratov, and Taganrog, including the neoclassical in 1914. 's refuge in 1923-1924, the neoclassical estate (formerly Morozov property), is also Schechtel's design.

The advent of in 1914, which halted practically all new construction for a decade, brought an end to Schechtel's professional career. His last work before the revolution was a wooden in the Moscow suburb of Solomennaya Storozhka, funded by the Tula Militia training camp. Schechtel modelled the church on historical area models (excluding the integrated bellfry, which was uncommon for Olonetz architecture). The church was closed in the 1930s, neglected and eventually demolished in the 1960s; a wooden replica was built in 1996-1997. [Russian: Church of St.Nicholas, [http://www.agios-nicolos.ru/about_history.html official site] ] Schectel's only post-1917 work, a pavilion at the 1923 All-Russia Agricultural Exhibition, met a similar fate.

Shechtel cooperated with various planning and design agencies, continued teaching at and , and even applied to the 1925 contest ( [http://www.utopia.ru/item.phtml?id=279&type=graphics&sortby=date&start=0 Schechtel's entry] ), but did not build anything anymore. Construction in the USSR, halted by a decade of hostilities, resumed in 1926, the year of Schechtel's death.

In 1918, the architect was evicted from his house on Bolshaya Sadovaya and had to live with his daughter, Vera Tonkova (nee Schechtel). Of Schechtel's four children, two of them — Vera Tonkova and Lev Zhegin — would become well-known artists. According to several accounts, however, Schechtel died in bitter poverty. He was interred at .

Schechtel's Art Nouveau was despised by Soviet critics as rotten until the Brezhnev period. At the same time, his Neo-Russian structures, like Yaroslavsky Terminal, which matched the patriotic Soviet rhetoric quite well, were at first tolerated and later praised. Many of his Moscow mansions were leased to foreign embassies, have been well maintained and are still in good order inside and out. His public buildings, including his theaters and the Taganrog Library, also remain close to their original design externally.

"This article is started as an abridged translation of Russian wiki article, itself based on materials from [http://mosmodern.race.ru/ mosmodern.race.ru] . Some material was rearranged as in V.G.Vlasov's "Lexicon of Fine Arts". [Russian: Власов В.Г. Большой энциклопедический словарь изобразительного искусства, СПБ, 2000, online at [http://cih.ru/ae/ae77.html Vlasov] ] Contradicting, unreferenced statements were omitted. Dates, wherever possible, are referenced to drafts, not completion, as in "Architectural monuments of Moscow" ("Памятники архитектуры Москвы") academic edition."