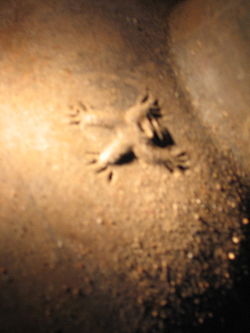 A duende is a fairy- or goblin-like mythological creature from Iberian, Latin American and Filipino folklore. While its nature varies throughout Spain, Portugal, Spanish and Portuguese-speaking America and the Philippines, analogues from other cultures include the Danish-Norwegian Nisse, the French lutin and nain rouge, the Irish clurichaun, leprechaun, and far darrig, the Manx fenodyree and mooinjer veggey, the Scottish/English brownie, the Welsh tylwyth teg, and the Swedish Tomte. The etymology of the word "duende" reinforces the equivalence to the latter (tomte from tomt="home") as it shares the same origin as the Spanish word dueño, "owner" (the "real owner" of the house). As Federico García Lorca uses the term, it seems closer to fairy as a realm of being. Duendes may also have some traits similar to goblins and kobolds.

The word is often considered to be the Spanish equivalent of the English word "sprite" or the Japanese word yokai and is used as an umbrella term for any fairy-like being such as goblins, pixies and elves.

The word is also used in Portuguese folklore, being used to describe Goblins, pixies, brownies and leprechauns. They are believed to be of a small stature wearing big hats, whistling a mystical song, while walking in the forest. Using their talent, they are believed to lure young girls to the forest causing them to lose their way home. Conversely, in some Latin cultures the Duendes are believed to be the helpers of people who get lost in the forest so they could find their way home. In the folklore of the Central American country of Belize, particularly amongst the country's African/Carib-descended Creole and Garifuna populations, Duende are thought of as a forest spirit called "Tata Duende" who lacks thumbs[1]

In Hispanic folklore of Mexico and the American Southwest, duendes are known as gnome like creatures who live inside the walls of homes, especially in the bedroom walls of young children. They attempt to clip the toenails of unkempt children, often leading to the mistaken removal of entire toes.[2] They are also known for taking items from young children. They have also been able to barter with the mother of young children so that they can take the child and have them to eat. They appear at night when children are at play with a ball, and watch the children and later make their appearance and confront the children.

Chamorro people believe in tales of taotaomonas, duendes and other spirits. Duende, according to the Chamorro-English Dictionary by Donald Topping, Pedro Ogo and Bernadita Dungca, is a goblin, elf, ghost or spook in the form of a dwarf, a mischievous spirit which hides or takes small children.[3]

Filipinos also believe in Dwende, which frequently live in rocks and caves, old trees, unvisited and dark parts of houses or in ant hills where they are called nuno sa punso (old man of the mound). They are either categorized as good or evil depending on their color - white or black respectively and often play with children.