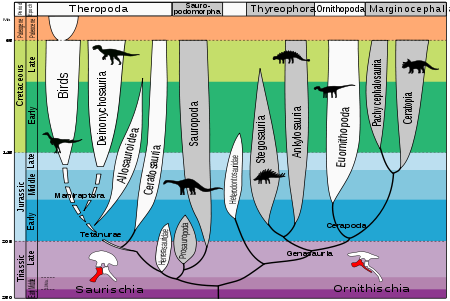 Dinosaur classification began in 1842 when Sir Richard Owen placed Iguanodon, Megalosaurus, and Hylaeosaurus in "a distinct tribe or suborder of Saurian Reptiles, for which I would propose the name of Dinosauria."[1] In 1887 and 1888 Harry Seeley divided dinosaurs into the two orders Saurischia and Ornithischia, based on their hip structure.[2] These divisions have proved remarkably enduring, even through several seismic changes in the taxonomy of dinosaurs.

The largest change was prompted by entomologist Willi Hennig's work in the 1950s, which evolved into modern cladistics. For specimens known only from fossils, the rigorous analysis of characters to determine evolutionary relationships between different groups of animals (clades) proved incredibly useful. When computer-based analysis using cladistics came into its own in the 1990s, paleontologists became among the first zoologists to almost wholeheartedly adopt the system.[3] Progressive scrutiny and work upon dinosaurian interrelationships, with the aid of new discoveries that have shed light on previously uncertain relationships between taxa, have begun to yield a stabilizing classification since the mid-2000s. While cladistics is the predominant classificatory system among paleontology professionals, the Linnean system is still in use, especially in works intended for popular distribution.

As most dinosaur paleontologists have advocated a shift away from traditional, ranked Linnaean taxonomy in favor of rankless phylogentic systems,[3] few ranked taxonomies of dinosaurs have been published since the 1980s. The following schema is among the most recent, from the third edition of Vertebrate Palaeontology,[4] a respected undergraduate textbook. While it is structured so as to reflect evolutionary relationships (similar to a cladogram), it also retains the traditional ranks used in Linnaean taxonomy. The classification has been updated from the second edition in 2000 to reflect new research, but remains fundamentally conservative.

Benton classifies all dinosaurs within the Series Amniota, Class Sauropsida, Subclass Diapsida, Infraclass Archosauromorpha, Division Archosauria, Subdivision Avemetatarsalia, Infradivision Ornithodira, and Superorder Dinosauria. Dinosauria is then divided into the two traditional orders, Saurischia and Ornithischia. The cross (†) is used to indicate taxa with no living members.

The following is based on the second edition of The Dinosauria,[5] a compilation of articles by experts in the field that provided the most comprehensive coverage of Dinosauria available when it was first published in 1990. The second edition updates and revises that work.

The cladogram and phylogenetic definitions below reflect the current understanding of evolutionary relationships. The taxa and symbols in parentheses after a given taxa define these relationships. The plus symbol ("+") between taxa indicates the given taxa is a node-based clade, defined as comprising all descendants of the last common ancestor of the "added" taxa. The greater-than symbol (">") indicates the given taxon is a stem-based taxon, comprising all organisms sharing a common ancestor that is not also an ancestor of the "lesser" taxon.