The Somali Bantu (also called Jareer, Gosha or Mushunguli) are a minority ethnic group in Somalia. They primarily reside in southern Somalia, near the Juba and Shabelle rivers, and are the descendants of people from various Bantu ethnic groups originating from what are modern-day Tanzania, Malawi and Mozambique who were sold into Somalia as part of the Arab slave trade in the 19th century.[3] Bantus are ethnically, physically, and culturally distinct from Somalis, and they have remained marginalized ever since their arrival in Somalia.[4]

These Bantu are not to be confused with the members of Swahili society in coastal towns, such as the Bajuni, who speak dialects of the Bantu Swahili language.

All in all, the number of Bantu inhabitants in Somalia before the civil war is thought to have been about 80,000 (1970 estimate), with most concentrated between the Juba and Shabelle rivers in the south.[1] However, recent estimates place the figure as high as 900,000 persons.[2]

The term "Somali Bantu" is an ethnonym that was invented by humanitarian aid-supplying agencies shortly after the outbreak of the civil war in Somalia in 1991. Its purpose was to help the staff of these aid agencies better distinguish between, on the one hand, Bantu minority groups hailing from Somalia and thus in need of immediate humanitarian attention, and on the other hand, other Bantu groups from elsewhere in Africa that did not require immediate humanitarian assistance. The neologism further spread through the media, which repeated verbatim what the aid agencies' increasingly began indicating in their reports as the new name for Somalia's ethnically Bantu minorities. Prior to the civil war, the Bantu were simply referred to in the literature as Bantu, Gosha, Mushunguli or Jareer, as they still, in fact, are within Somalia proper.[5]

Between 2500–3000 years ago, speakers of the original proto-Bantu language group began a millennia-long series of migrations eastward from their original homeland in the general Nigeria and Cameroon area of West Africa.[6] This Bantu expansion first introduced Bantu peoples to central, southern and eastern Africa, regions where they had previously been absent from.[7][8]

Some Bantus in Somalia are believed to be direct descendants of these early migrants from West Africa. Most, however, are descended from Bantu groups that had settled in Southeast Africa after the initial expansion from Nigeria/Cameroon, and whose members were later captured and sold into the Arab slave trade.[7] 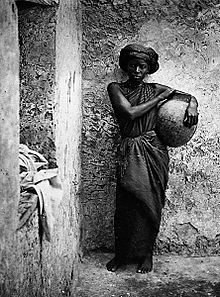 The Indian Ocean slave trade was multi-directional and changed over time. To meet the demand for menial labor, black slaves captured by Arab slave traders from southeastern Africa were sold in cumulatively large numbers over the centuries to customers in Egypt, Arabia, the Persian Gulf, India, the Far East, the Indian Ocean islands, Ethiopia and Somalia.[3][9]

From 1800 to 1890, between 25,000–50,000 black African slaves are thought to have been sold from the slave market of Zanzibar to the Somali coast.[10] Most of the slaves were from the Majindo, Makua, Nyasa, Yao, Zalama, Zaramo and Zigua ethnic groups of Tanzania, Mozambique and Malawi. Collectively, these Bantu groups are known as Mushunguli, which is a term taken from Mzigula, the Zigua tribe's word for "people" (the word holds multiple implied meanings including "worker", "foreigner", and "slave").[3]

Bantu slaves were made to work in plantations owned by Somalis along the Shebelle and Jubba rivers, harvesting lucrative cash crops such as grain and cotton.[11]

In the 1840s, the first fugitive slaves from the Shebelle valley began to settle in the Jubba valley. By the early 1900s, an estimated 35,000 former Bantu slaves settled there.

The Italian colonial administration abolished slavery in Somalia at the turn of the 20th century. Some Bantu groups, however, remained enslaved well until the 1930s, and continued to be despised and discriminated against by large parts of Somali society.[12]

The Bantus were also conscripted to forced labor on Italian-owned plantations since the Somalis themselves were averse to what they deemed menial labor,[13] and because the Italians viewed the Somalis as racially superior to the Bantu.[14] 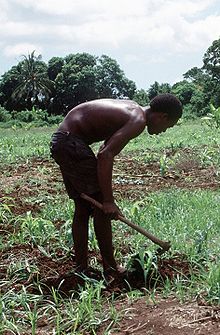 A Bantu man working in the fields.

While some Bantus adopted the Somali language, speaking for the most part a Bantu version of the southern Somali dialect of Af-Maay, a number still speak a dialect of their ancestral Bantu languages (e.g. Zigua, Mushunguli).[3]

Unlike Somalis, most of whom are nomadic herders, Bantus are mainly sedentary subsistence farmers. Sharp physical differences also distinguish the two groups: Bantus have kinkier hair than the soft-haired Somalis, and are shorter, darker, and more muscular with broader features.[5][7]

The majority of Bantus have converted to Islam, which they first began embracing in order to escape slavery.[16] Starting in the colonial period, some also began converting to Christianity.[17] However, whether Muslim or Christian, many Bantu have retained their ancestral animist traditions, including the practice of possession dances and the use of magic and curses.[16] Many of these religious traditions closely resemble those practised in Tanzania, similarities which also extend to hunting, harvesting and music, among other things.[7]

Many Bantu have also retained their ancestral social structures, with their Bantu tribe of origin in southeastern Africa serving as the principal form of social stratification. Smaller units of societal organization are divided according to matrilineal kinship groups, the latter of which are oftentimes interchangeable with ceremonial dance groupings.[15]

Primarily for security reasons, some Bantus have attempted to attach themselves to groups within the Somalis' indigenous patrilineal clan system of social stratification.[18] These Bantus are referred to by the Somalis as sheegato or sheegad (literally "pretenders"[19]), a term used to denote the fact that they are not ethnically Somali and are attached to a Somali group on an adoptive, client basis. Bantus that have retained their ancestral southeast African traditions have likewise been known to level sarcasm at other Bantus who have tried to associate themselves with their Somali patrons, albeit without any real animosity (the civil war has actually served to strengthen relationships between the various Bantu sub-groups).[15][20][21]

All told, there has been very little co-mingling between Bantus and Somalis. Intermarriage is also extremely rare, and typically results in ostracism the few times it does occur.[7][22]

During the Somali Civil War, many Bantu were forced from their lands in the lower Juba River valley, as militiamen from various Somali clans took control of the area.[23] Being visible minorities and possessing little in the way of firearms, the Bantu were particularly vulnerable to violence and looting by gun-toting militiamen.[7]

To escape war and famine, tens of thousands of Bantus fled to refugee camps like Dadaab in neighboring Kenya, with most vowing never to return to Somalia. In 2002, the International Organization for Migration (IOM) moved a large number of Bantu refugees 1500 km northwest to Kakuma because it was safer to process them for resettlement farther away from the Somali border.[3]

Resettlement in the United States 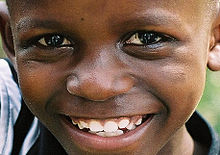 A Bantu refugee boy in Florida.

In 1999, the United States classified the Bantu refugees from Somalia as a priority and the United States Department of State first began what has been described as the most ambitious resettlement plan ever from Africa, with thousands of Bantus scheduled for resettlement in America.[24] In 2003, the first Bantu immigrants began to arrive in U.S. cities, and by 2007, around 13,000 had been resettled to cities throughout the United States with the help of the United Nations High Commissioner for Refugees (UNHCR), the U.S. State Department, and refugee resettlement agencies across the country.[24]

Among the resettlement destinations, it is known that Salt Lake City, Utah received about 1,000 Bantus. Other cities in the southwest such as Denver, Colorado, San Antonio, Texas, and Tucson, Arizona have received a few thousand as well. In New England, Manchester, New Hampshire and Burlington, Vermont were also destinations selected for resettlement of several hundred. Plans to resettle the Bantu in smaller towns, such as Holyoke, Massachusetts and Cayce, South Carolina, were scrapped after local protests. There are also communities of several hundred to a thousand Bantu people in cities that also have high concentrations of ethnic Somalis such as the Minneapolis-St. Paul area,[25] Columbus, Ohio,[26] Atlanta,[27] San Diego,[28] Boston,[29] and Seattle,[30] with a notable presence of about 1,000 Bantus in Lewiston, Maine.[31][32] The documentary film Rain in a Dry Land chronicles this journey, with stories of Bantu refugees resettled in Springfield, Massachusetts and Atlanta, Georgia.[33]

Prior to the United States' agreement to accommodate Bantu refugees from Somalia, attempts were made to resettle the refugees to their ancestral homes in southeastern Africa. Before the prospect of emigrating to America was raised, this was actually the preference of the Bantus themselves. In fact, many Bantus voluntarily left the UN camps where they were staying, to seek refuge in Tanzania. Such a return to their ancestral homeland represented the fulfillment of a two-century old dream.[24]

While Tanzania was initially willing to grant the Bantus asylum, the UNCHR did not provide any financial or logistical guarantees to support the resettlement and integration of the refugees into Tanzania. The Tanzanian authorities also experienced additional pressure when refugees from neighbouring Rwanda began pushing into the western part of the country, forcing them to retract their offer to accommodate the Bantus.[7][24]

Mozambique, the other ancestral home of the Bantu, then emerged as an alternative point of resettlement. However, as it became clear that the United States was prepared to accommodate the Bantu refugees, the Mozambican government soon backed out on its promises, citing a lack of resources and potential political instability in the region where the Bantu might have been resettled.[24]

By the late 2000s, the situation in Tanzania had improved, and the Tanzanian government began granting Bantus citizenship and allocating them land in areas of Tanzania where their ancestors are known to have been taken as slaves.[2][7][34]