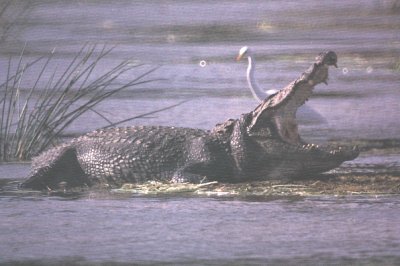 range_map_caption = Distribution of "Crocodylus palustris" The mugger crocodile ("Crocodylus palustris") (literally "crocodile of the "), also called the Iranian, marsh, muggar or Persian crocodile (in Persian گاندو "Gandu"), is found throughout the and the surrounding countries (, , ). In Pakistan's coastal regions of the and delta of it is known as the "Indus crocodile", although they do exist in parts of , and parts of and . The name "mugger" is a corruption of the Urdu word "magar" which means "water monster"in the . [Britton Adam (2002) Crocodilian species list, retrieved August 30, 2007 [http://www.flmnh.ufl.edu/cnhc/csp_cpal.htm "Crocodylus palustris"] ]

Mugger crocodiles have 19 upper teeth on each side; a snout that is 1 1/3 to 1 1/2 as long as broad at the base; a rough head but without any ridges; mandibular symphysis extending to the level of the fourth or fifth tooth; pre-maxillo-maxillary suture, on the palate, transverse, nearly straight, or curved forwards; and nasal bones separating the pnemaxillaries above. Four large nuchals forming a square, with a smaller one on each side; two pairs of smaller nuchals on a transverse series behind the occiput. Dorsal shield well separated from the nuchal, the scutes usually in 4, rarely in 6, longitudinal series, those of the two median usually considerably broader than long; 16 or 17 transverse series. Scales on limbs keeled. Fingers webbed at the base; outer toes extensively webbed. A serrated fringe on the outer edge of the leg. Adult blackish olive above: young pale olive, dotted and spotted with black.The largest specimen in the British Museum measures 12 feet, but individuals are said to grow much larger. [Boulenger, G. A. (1890) Fauna of British India. Reptilia and Batrachia.] Mature males range from 4 to 5 m (13-16.5 feet). [ [http://www.flmnh.ufl.edu/cnhc/csp_cpal.htm Crocodilian Species - Marsh Crocodile (Crocodylus palustris) ] ]

The mugger crocodile can be found in , , , , , the southern tip of and probably in . The mugger is the only crocodilian found in Iran and Pakistan. This crocodile is the most common and widespread of the three species of crocodiles in India, far out numbering the much larger within the country (and most likely within neighboring countries).

In the 1980's the largest population of wild crocodiles in , lived in the , and in the Chinnar, Thennar and Pambar rivers that drain into it. Their total population here was estimated to be 60 adults and 37 sub-adults. The Amaravati Sagar Crocodile Farm, Established there in 1975, is the largest crocodile nursery in India. Eggs are collected from wild nests along the perimeter of the reservoir to be hatched and reared at the farm. There were up to 430 animals maintained in captivity at one time. Hundreds of adult crocodiles have been reintroduced from here into the wild. [Andrews,Harry V., "Status and Distribution of the Mugger Crocodile in Tamil Nadu" [http://www.wii.gov.in/envis/crocodile/tnadu.htm] ]

Mainly a freshwater species, the mugger crocodile is found in lakes, rivers and marshes. Muggers prefer slow-moving, shallower bodies of water rather than, fast-flowing, deep areas. Also known to thrive in man-made reservoirs and irrigation canals. Although it prefers freshwater, it has some tolerance to saltwater therefore is occasionally reported from saltwater lagoons. It is sympatric with the (Gavialis gangeticus) in some areas of India and with the saltwater crocodile (Crocodylus porosus) in other areas, but separated by habitat most of the time. It is adapted to terrestrial life like its cousin, the Cuban crocodile, more than most crocodilians, but is ecologically most similar to the African . It is known to be more mobile on land, can migrate considerable distances over land in search of a more suitable habitat. It can chase prey on land for short distances. They are also known to dig burrows as shelters during the dry seasons.

Being a large carnivorous reptile, it eats fish, other reptiles and small mammals. In fact, most vertebrates that approach to drink are potential prey, and may suffer being seized and dragged into the water to be drowned and devoured at leisure. Attacks on large prey are very rare.