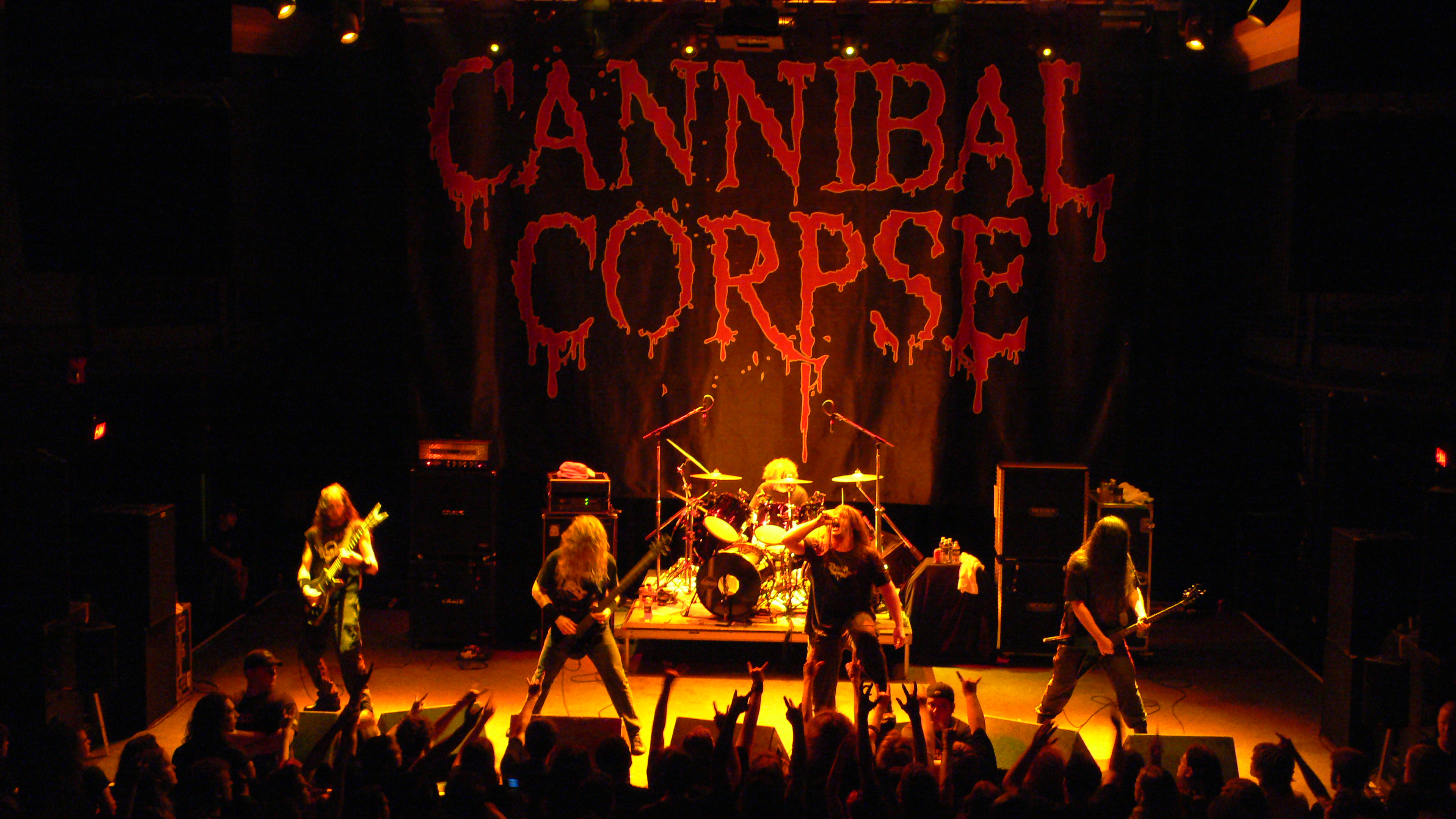 Cannibal Corpse is an American band founded in 1986. The band has released ten studio albums, one boxed set, and one live album. Although Cannibal Corpse has had virtually no radio or television exposure, a cult following began to build behind the group with albums like 1991's "" and 1992's "". Cannibal Corpse reached over 1 million in record sales worldwide in 2003,

Cannibal Corpse draws influence from bands such as ,

Cannibal Corpse was made up of members from three earlier Buffalo-area death metal bands, Beyond Death (Webster, Owen), Leviathan (Barnes), and (Barnes, Rusay, Mazurkiewicz). The band played their first show at Buffalo's River Rock Cafe in April 1989, shortly after recording a five-song demo tape "Cannibal Corpse". Within a year of that first gig, the band was signed to and their full-length, debut album, "", was released in August 1990.

“The main thing that helped us [get signed to Metal Blade] was sending the label a videotape of our live show. The crowd reaction and our energy helped us to the extreme.”- Jack Owen [ [http://www.tombofthemutilated.net/Cannibal-Corpse-Jack-Owen-Chat-Transcript.html A Chat With Jack Owen Of Cannibal Corpse ] ]

The band has had many line-up changes over the years. In 1993, founding member and guitarist Bob Rusay was dismissed from the group (after which he became a golf instructor) and was ultimately replaced by guitarist . In 1995, vocalist was dismissed from the band (becoming a member of Six Feet Under and later ) and was replaced with Monstrosity's vocalist George "Corpsegrinder" Fisher.

On the departure of Chris Barnes (From a 1995 interview): "There's been problems off and on for several years but we'd all been getting along for the past year and everything was fine but then we thought if we kept Chris in the band the band couldn't get any better in the vocal performance and the overall way things were sounding. We weren't totally happy with some of the things Chris had written, we wanted things that were more patterned and easier to remember and Chris was doing some whacked out stuff that didn't fit the rhythms of the songs. It seemed like he wasn't quite as interested as he once was in the band. The whole point of being in a good band is every musician should do their best to make the other guys in the band feel happy playing with him. If I was playing something or wrote something that the other guys didn't like I'd want them to tell me. It needed to be a team and we were not a team, it was the four of us and Chris. Now it's a team, not to sound corny, but it is."- Alex Webster [ [http://www.geocities.com/SunsetStrip/Alley/3426/cannibal.html Cannibal Corpse Interview ] ]

In 1997, Barrett, who originally replaced Rusay on guitar, left Cannibal Corpse to rejoin his previous band . After Barrett left, he was replaced by guitarist Pat O’Brien who first appeared on their 1998 release "". Founding member and guitarist left Cannibal Corpse in 2004 to spend more time on his second band, Adrift. He joined the band Deicide in late 2005 and was first featured on the album, "". of Origin briefly replaced him as second guitarist on 2004's Tour of the Wretched. Barrett rejoined the band in 2005 and is featured on their latest album, "Kill", which was released , on .

Writing for a new album began in November 2007, as presaged in an interview with bassist . [cite web|url=http://www.roadrunnerrecords.com/blabbermouth.net/news.aspx?mode=Article&newsitemID=68428|title=Cannibal Corpse to begin writing new album in November |work=blabbermouth.net|accessdate=2007-03-08] According to an interview in MetalUnderground.com the release period is likely to be late 2008 . [ [http://www.metalunderground.com/interviews/details.cfm?newsid=23209 Interviews - Interview with Paul M. of Cannibal Corpse ( Metal Underground . com ) ] ]

"We don't sing about politics. We don't sing about religion. [...] All our songs are short stories that, if anyone would so choose they could convert it into a horror movie. Really, that's all it is. We like gruesome, scary movies, and we want the lyrics to be like that. Yeah, it's about killing people, but it's not promoting it at all. Basically these are fictional stories, and that's it. And anyone who gets upset about it is ridiculous". [cite web |url=http://www.markprindle.com/fisher-i.htm |title=Interview: George “Corpsegrinder” Fisher - 2004 |accessdate=2008-06-09 |accessmonthday= |accessdaymonth= |accessyear= |author=Prindle, Mark |last= |first= |authorlink= |coauthors= |date= |year= |month= |format= |work= |publisher=Prindle Rock And Roll Record Review Site |pages= |language= |doi= |archiveurl= |archivedate= |quote= ]

“I think the lyrics are just like or , (what) any horror novelist would do except I shorten it and I go right to the point instead of putting so much fill-in-the-blanks.”- Chris Barnes [ [http://www.youtube.com/watch?v=_T79BWLCo7c&feature=related YouTube - Death Metal Special '93 [Part 2 ] ]

Australian Family Association vice-president Gillian Gonzalez said Cannibal Corpse have the most offensive lyrics she had ever seen, saying "They are absolutely vile and should not be allowed into the country". [ [http://www.metalstorm.ee/events/news_comments.php?news_id=2909 Cannibal Corpse - Australian Tour Sparks Outrage - Metal Storm ] ] "If vomit were a movie, this would be the soundtrack," wrote one critic of Cannibal Corpse's music. [AllMusic.com]

Like directors who helm splatter movies, Cannibal Corpse prides itself on overtly violent and sexual songs and album artwork as nothing more than an extreme form of over-the-top entertainment. In the film "", George Fisher said death metal is best viewed "as art", and mentioned that far more violent art can be found at the Vatican, as such depictions actually happened. [Metal: A Headbanger's Journey (2005, Sam Dunn, director)] Some of Cannibal Corpse's most controversial song titles include "Dismembered and Molested", "Entrails Ripped from a Virgin's Cunt," "Fucked with a Knife," "Meat Hook Sodomy," and "Necropedophile"." They were banned from displaying the cover art or lyrics of and playing any of the songs from their first 3 albums in Germany until 2006 because "A woman saw someone wearing one of our shirts, I think she is a schoolteacher, and she just caused this big stink about it. So [now] we can’t play anything from the first three records. And it really sucks because kids come up and they want us to play all the old songs — and we would — but they know the deal. We can’t play ‘Born In a Casket’ but can play ‘Dismembered and Molested."- George Fisher. [ [http://www.chicagoinnerview.com/archives/feb04_cannibal_corpse.htm c h i c a g o I N N E R V I E W ] ] [http://en.wikipedia.org/wiki/Hammer_Smashed_Face]

“If people weren’t interested in this kind of thing, then why is it… They do hour-long documentaries and they run those all evening long. And it’ll be about prison, or they’ll have a special about child molesters, and then they’ll have a special about murderers. And this is a major station... And it’s like, well, a lot of people seem to be interested in it or they wouldn’t show it, because that’s the bottom line – they’re not going to show it if they’re not getting good ratings. So, people are interested in the dark side... people like to be horrified; they like to be scared. I mean, you wouldn’t have, for example, a frightening ride at a theme park or something... They want to see frightening things at a safe distance.”- Alex Webster [ [http://www.sinister.com.au/_features/confess/cannibalcorpse/ccorpse.php SINISTER ONLINE - Confession: Alex Webster of Cannibal Corpse ] ]

When asked about violence in the real world, Alex Webster commented: “I think people probably aren’t that desensitized to it, you know including myself, like you know, we sing about all this stuff and you watch a movie where you know it’s not real and it’s no big deal, but if you really saw someone get their brains bashed in right in front of you, I think it would have a pretty dramatic impact on any human being you know what I mean? Or some terrible, gross act of violence or whatever done right in front of you, I mean you’d react to it, no matter how many movies you’ve watched or how much gore metal you’ve listened to or whatever, I’m sure it’s a completely different thing when it’s right in front of you. Even though we’ve got crazy entertainment now, our social realities are actually a bit more civilized than they were back then, I mean we’re not hanging people or whipping them in the street and I think that’s positive improvement for any society in my opinion.” [ [http://www.puregrainaudio.com/interviews/cannibal_corpse1.htm PureGrainAudio.com :: interviews :: cannibal corpse ] ] He also believes that the violent lyrics can have positive values: "It’s good to have anger music as a release". [cite web |url=http://www.waytooloud.com/2007/10/23/cannibal-corpse-alex-webster-and-george-%E2%80%9Ccorpsegrinder%E2%80%9D-fisher/ |title=Interview: Cannibal Corpse - Alex Webster and George “Corpsegrinder” Fisher |accessdate=2008-06-09 |accessmonthday= |accessdaymonth= |accessyear= |author= |last= |first= |authorlink= |coauthors= |date=2007-10-23 |year= |month= |format= |work= |publisher=Way Too Loud! |pages= |language= |doi= |archiveurl= |archivedate= |quote= ]

George Fisher said that in their songs: "There’s nothing ever serious. We’re not thinking of anybody in particular that we’re trying to kill, or harm or anything." "How can you say we’re promoting violence with imaginary creatures? The people doing the killing in our songs are zombies." [ [http://www.hmmagazine.com/says/archive/what_cannibal_corpse_says200404.php?page=all HM - So and So Says ] ]

In May 1995, then-United States Senator mentioned the band by name and accused them of violating human decency. Dole later admitted to never actually hearing the music of Cannibal Corpse. [ [http://www.geocities.com/SunsetStrip/Alley/3426/can4.html Fact's/Opinions ] ] Cannibal Corpse also enjoyed a brief cameo in the 1994 film "", performing an abridged version of their song "Hammer Smashed Face". Carrey apparently insisted that they perform in the movie because they were his favorite band. [ [http://www.imdb.com/name/nm0000120/bio#ba IMDb.com] Carrey's Biography, Trivia section. Retrieved on .] In the 2003 film "", a large "Cannibal Corpse" sticker is visible in Dewey Finn's sleeping area. Additionally, comedian of ABC's "" made a lounge arrangement of Cannibal Corpse's song "Rancid Amputation" after the Australian government banned the band's touring of the country.