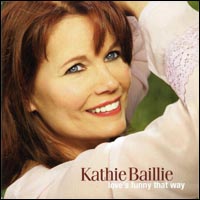 "Love's Funny That Way" is 's first solo album after a long career as main vocalist of the group . Baillie receives backing vocals from guest performers on several of the songs, including on a reprise of his hit "Never Knew Lonely" and on "That Old Glass Case," a tune written by the former Highway 101 lead vocalist. Gill's wife also helps in co-writing "Send a Message."

Also contributing to the album is Baillie's daughter , who provides harmony on Carlson's song in addition to co-writing "Come to Me" with Kathie Baillie. Baillie's husband produced the album in addition to co-writing four of its songs. The title song, "Love's Funny That Way," was originally recorded by Australian pop superstar in 1996 on the soundtrack album of the motion picture "".