The Island is a 2005 American science fiction/thriller film directed by Michael Bay and starring Ewan McGregor and Scarlett Johansson. It was released on July 22, 2005 in the United States, and was nominated for three awards including the Teen Choice Award.

It is described as a pastiche of "escape-from-dystopia" science fiction films of the 1960s and 1970s such as Fahrenheit 451, THX 1138, Parts: The Clonus Horror, and Logan's Run. The film's plot revolves around the struggle of Ewan McGregor's character to fit into the highly structured world he lives in, and the series of events that unfolds when he questions how truthful that world really is.

The film, which cost $126 million to produce, earned only $36 million at the United States box office, but earned $127 million overseas, for a $162 million worldwide total. The original score for the film was composed by Steve Jablonsky.

Lincoln Six Echo (Ewan McGregor) lives in an isolated compound which strictly regulates its inhabitants' lives. The Overseers control every aspect of the residents' lives, from diet and free time activities to social relationships. The inhabitants hope to win a lottery to go to "the Island", the only place on Earth not contaminated by a deadly pathogen. Lincoln tells Dr. Merrick (Sean Bean) of his discontent with the plain white clothes everyone is given and the strict social controls. Concerned about strange dreams Lincoln experiences about a speedboat and other unfamiliar items, Merrick inserts probes into Lincoln's body to monitor his cerebral activities.

While illicitly visiting a power-plant basement where his friend, the technician James McCord (Steve Buscemi), works, Lincoln discovers a live moth in a ventilation shaft, leading him to deduce that the outside world is not contaminated. Lincoln captures and releases the moth and follows it to another section, where he witnesses two recent lottery winners being killed: one after childbirth, and the other in the process of having his liver harvested. Security discovers that Lincoln has wandered into unauthorized areas, and starts searching for him. As Lincoln rescues Jordan Two Delta (Scarlett Johansson), a friend who has just won the lottery, Dr. Merrick discovers that Lincoln is beginning to discover the truth.

While eluding security and escaping from the facility, Lincoln and Jordan learn that both the contamination of the outside world and the Island are myths. And later learn that the residents are clones of wealthy sponsors, who intend to use them for spare parts or surrogate motherhood. Merrick's technology allows clones to incubate directly into adulthood. He tells sponsors and the government that the clones do not gain consciousness, but when Merrick hires French mercenary Albert Laurent (Djimon Hounsou) to kill or capture the escapees, he admits that the organs of unconscious clones inevitably fail, making them useless. Thus, he needs the clones conscious in the compound.

Lincoln and Jordan escape the compound and find themselves in the Arizona desert. They find McCord, who gives them the name of Lincoln's sponsor in Los Angeles, and helps them to the Yucca railway station. After Laurent's mercenaries find and kill McCord, Lincoln and Jordan ride the train in hopes of finding help in Los Angeles. (Jordan Two's sponsor, model Sarah Jordan, cannot help as she is in a coma following a car accident.) Lincoln Six's sponsor, Tom Lincoln—the owner of the speedboat in Lincoln's dreams—agrees to help expose the truth about the organ harvesting, but secretly turns against his clone by informing Merrick about the situation. Merrick sends the mercenaries to the location, but Lincoln Six tricks Laurent into killing Tom and assumes Tom's identity.

The cerebral probes reveal that Lincoln Six Echo inherited some memories from his sponsor Tom Lincoln (which had been assumed impossible). Merrick becomes afraid that the same will happen with the other clones and decides to kill them all. Lincoln and Jordan plan to liberate their fellow clones. Now posing as Tom Lincoln, Lincoln Six returns to the compound in order to destroy the holographic projectors that hide the outside world from its residents. With help from Laurent—who has moral qualms with treating the clones as if they are not human—and Jordan, Merrick is killed and the clones are freed. The film ends with a shot of the clones on hill outdoors, seeing the outside world for the first time, and then the film cuts to the final frame which shows Lincoln and Jordan together on the deck of the speedboat from his dreams. 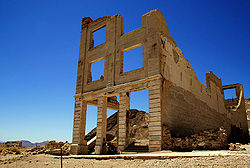 The computer in Merrick's office at the Institute, which features a large, tabletop touchscreen display capable of detecting several forms of input, was rumored to be a large version of Microsoft Surface. The design was actually proposed by a technology adviser at MIT, who aimed for producing a believable vision of futuristic technology.[2]

The boat featured at the end of the film is the 118 WallyPower, built by Monte Carlo-based Wally Yachts. The car that Tom Lincoln owns is a 2002 concept car, the Cadillac Cien.

The Calvin Klein advertising Jordan sees in the street, in which she recognizes her sponsor Sarah Jordan, is the actual advertising for the Eternity Moment fragrance by Calvin Klein, in which Johansson was the model for in real life.

The ruined buildings where Jordan and Lincoln sleep after leaving the subterranean compound are in Rhyolite, Nevada. The city parts of the movie were filmed in Detroit, Michigan, most notable the Michigan Central Station and the Michigan Theater.[citation needed]

Ultimately, the film was considered a box office bomb, which Edward Jay Epstein of Slate Magazine blamed on poor publicity.[3] Epstein notes that research polls showed little awareness of The Island's impending release amongst its target audience and that trailers bore little relation to the film's plot. He writes, "What really failed here was not the directing, acting, or story (which were all acceptable for a summer movie) but the marketing campaign."

The Island received mixed reviews from critics. It has a 40% "Rotten" rating (based on 185 reviews) at Rotten Tomatoes,[4] and scored 50/100 (based on 38 reviews) at Metacritic.[5] Critical consensus was that the film was well acted and had impressive special effects but didn't deal with the ethical issues it raised as well as it could have. Many reviewers noted that the The Island seemed like two separate films.

Roger Ebert said, "[the first half] is a spare, creepy science fiction parable, and then it shifts into a high-tech action picture. Both halves work. Whether they work together is a good question."[6] He gave the film three out of four stars and praised the performances of the actors, in particular Michael Clarke Duncan: "[He] has only three or four scenes, but they're of central importance, and he brings true horror to them." On the critical side, he says the film "never satisfactorily comes full circle" and missed the opportunity "to do what the best science fiction does, and use the future as a way to critique the present."

Variety's Justin Change called the film an "exercise in sensory overkill" and said that Bay took on "the weighty moral conundrums of human cloning, resolving them in a storm of bullets, car chases and more explosions than you can shake a syringe at."[7] He noted McGregor and Buscemi as highlights of the film, along with Nigel Phelps' production design. However, he felt the story lacked in surprises and blamed "attention-deficit editing by Paul Rubell and Christian Wagner" for actions sequences that he felt lacked tension and were "joltingly repetitive".

Salon's Stephanie Zacharek also praised the actors but felt that when the film "[gets] really interesting, Bay thinks he needs to throw in a car crash or a round of gunfire to keep our attention." She felt the film had enough surprises "to make you wish it were better."[8] Similarly, The New York Times reviewer, A.O. Scott, said "[the] film is smarter than you might expect, and at the same time dumber than it could be."[9]

Reviewers objected to the prominent use of product placement in the film, despite the fact that the characters themselves are products and the property of the Merrick Corporation, which the film clearly denounces. Cisco Systems, MSN Search, Calvin Klein, Xbox, Puma, Reebok, Miller Light, NBC, NFL, Budweiser, Michelob, Apple, Aquafina, General Motors, DaimlerChrysler, Mack, Coca-Cola, Speedo, TAG Heuer, Amtrak, Ben & Jerry's, and Nokia are some of the sponsors of the film.[10] In an Entertainment Weekly cover story, Bay stated that the extensive product placement was the result of trying to offset production costs - "Bay called on friends at major corporations — outfits like Budweiser, General Motors, and Microsoft — and offered product placement in exchange for cash. 'We made about $850,000 on that,' he says. 'And we needed that money to get this movie made.'"[11] Bay began his directorial career in commercials and music videos, which is why these relationships were already in place.

The creators of the 1979 film Parts: The Clonus Horror, which was also about a colony that breeds clones to harvest organs for the elite, filed a copyright infringement suit.[12][13] According to a 2007 interview with Clonus screenwriter Bob Sullivan, DreamWorks and Clonus Associates reached a settlement, the specific terms of which are sealed.[14]

The controversy surrounding the lawsuit opened the floodgates to more criticism and accusations. Michael Marshall Smith's 1996 novel Spares, in which the hero liberates intelligent clones from a "spare farm", whose clients are told they are not conscious, was optioned by DreamWorks in the late 1990s but never made. It remains unclear if the story inspired The Island, and so Marshall Smith did not consider it worthwhile[15] to pursue legal action over the similarities. Paramount (once sister studio to DreamWorks after its parent Viacom purchased DreamWorks in late 2005, then spinning it off again in 2008) was in talks to option the novel after DreamWorks' rights expired, but declined after The Island was released. Marshall Smith considers it unlikely a Spares film will ever be made.[16]

Tessa Dick, former wife of the late science fiction writer Philip K. Dick, accused the filmmakers of plagiarizing his 1964 novel The Penultimate Truth, as well as several other works of fiction.

I'm watching this film, and I realize that everything in it is derivative of someone else's work. ... The basic premise is outright stolen from ... The Penultimate Truth. Everybody lives in an underground shelter because, they are told, the Earth is contaminated. ... They do throw in some action scenes from Blade Runner, which rips off Ridley Scott more than it does Phil. [Blade Runner is based on Dick's novel Do Androids Dream of Electric Sheep?."][17]