A semen analysis (plural: semen analyses) evaluates certain characteristics of a male's semen and the sperm contained in the semen. It may be done while investigating a couple's infertility or after a vasectomy to verify that the procedure was successful. It is also used for testing donors for sperm donation, in stud farming and farm animal breeding. Many men, especially if they are older, have a semen quality analysis, testing for common STIs, and perhaps testing for genetic defects done as part of routine pre-pregnancy testing, though this is decisively not the norm, as most doctors will not test the semen and sperm (and the man's genome and his STI status) unless specifically requested or there is a strong suspicion of a pathology in one of these areas discovered during the medical history or during the physical examination. Such testing, especially at that kind of comprehensive level, is very expensive and time-consuming, and may not be adequately covered by most insurance plans unless the insurance company, within the parameters of the plan and its coverage, accepts the medical evidence that there is a very valid reason for doing so.

The characteristics measured by semen analysis are only some of the factors in semen quality. One source states that 30% of men with a normal semen analysis actually have abnormal sperm function.[1] Conversely, men with poor semen analysis results may go on to father children.[2]

A third option for collecting a sample is through coitus interruptus (withdrawal). With this technique, the man removes his penis from his partner near the end of intercourse and ejaculates into a cup.

Finally, if a blockage in the vas deferens is suspected to impede fertility, semen can be taken directly from the epididymis. Such a collection is called per cutaneous epididymal sperm aspiration (PESA). Alternatively, the testicular tissue itself, instead of the sperm produced can be investigated. Then, the collecting method is called TESE.[4] 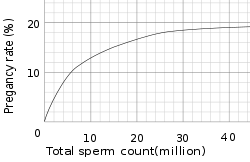 Approximate pregnancy rate varies with amount of sperm used in an artificial insemination cycle. Values are for intrauterine insemination, with sperm number in total sperm count, which may be approximately twice the total motile sperm count.

Sperm count, or sperm concentration to avoid mixup, measures the concentration of sperm in a man's ejaculate, distinguished from total sperm count, which is the sperm count multiplied with volume.[5] Over 15[6] million sperm per milliliter is considered normal, according to the WHO in 2010. Older definitions state 20 million.[1][2] A lower sperm count is considered oligozoospermia. A vasectomy is considered successful if the sample is azoospermic. Some define success with rare non-motile sperm are observed (fewer than 100,000 per millilitre).[7] Others advocate obtaining a second semen analysis to verify the counts are not increasing (as can happen with re-canalization) and others still may perform a repeat vasectomy for this situation.

The average sperm count today is around 60 million per milliliter in the Western world, having decreased by 1-2% per year from a substantially higher number decades ago.[8]

Chips for home use are emerging that can give an accurate estimation of sperm count after three samples taken on different days. Such a chip may measure the concentration of sperm in a semen sample against a control liquid filled with polystyrene beads.[9]

Total sperm count, or total sperm number, is the total number of spermatozoa in the entire ejaculate. By WHO, lower reference limit (2.5th percentile) is 39 million per ejaculate.[6]

Regarding sperm motility, WebMD defines normal motility as 60% of observed sperm, or at least 8 million per millilitre, showing good forward movement.[2] The World Health Organization has a similar value of 50% and this must be measured within 60 minutes of collection. WHO also has a parameter of vitality, with a lower reference limit of 60% live spermatozoa.[6] A man can have a total number of sperm far over the limit of 20 million sperm cells per milliliter, but still have bad quality because too few of them are motile. However, if the sperm count is very high, then a low motility (for example, less than 60%) might not matter, because the fraction might still be more than 8 million per millilitre. The other way around, a man can have a sperm count far less than 20 million sperm cells per millilitre and still have good motility, if more than 60% of those observed sperm cells show good forward movement.

A more specified measure is motility grade, where the motility of sperm are divided into four different grades:[10] 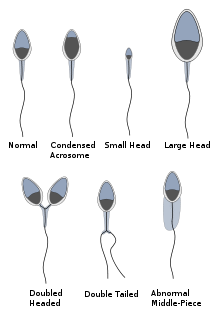 Regarding sperm morphology, the WHO criteria as described in 2010 state that a sample is normal (samples from men whose partners had a pregnancy in the last 12 months) if 4% (or 5th centile) or more of the observed sperm have normal morphology.[6]

Morphology is a predictor of success in fertilizing oocytes during in vitro fertilization.

Up to 10% of all spermatozoa have observable defects and as such are disadvantaged in terms of fertilising an oocyte[11].

WebMD advises that semen volumes between 1.0 mL and 6.5 mL are normal;[2] WHO regards 1.5 ml as the lower reference limit.[6] Low volume may indicate partial or complete blockage of the seminal vesicles, or that the man was born without seminal vesicles.[1] In clinical practice, a volume of less than 2 mL in the setting of infertility and absent sperm should prompt an evaluation for obstructive azoospermia. A caveat to this is be sure it has been at least 48 hours since the last ejaculation to time of sample collection.

Regarding the level of fructose in the semen, WebMD lists normal as at least 3 mg/mL.[2] WHO specifies a normal level of 13 μmol per sample. Absence of fructose may indicate a problem with the seminal vesicles.[1]

The liquefaction is the process when the gel formed by proteins from the seminal vesicles is broken up and the semen becomes more liquid. It normally takes less than 20 minutes for the sample to change from a thick gel into a liquid. An abnormally long liquefaction (more than 30 minutes at 37 24°C) time may indicate an infection.[citation needed] In the NICE guidelines, a liquefaction time within 60 minutes is regarded as within normal ranges.[13]

Use of approximately 20 million sperm of motility grade c or d in ICI, and 5 million ones in IUI may be an approximate recommendation.

The NICE guidelines also include testing vitality, with normal ranges defined as more than 75% of sperm cells alive.[13]

Apart from the semen quality itself, there are various methodological factors that may influence the results, giving rise to inter-method variation.

If the results from a man's first sample are subfertile, they must be verified with at least two more analyses. At least 2 to 4 weeks must be allowed between each analysis.[19] Results for a single man may have a large amount of natural variation over time, meaning a single sample may not be representative of a man's average semen characteristics.[20] In addition, sperm physiologist Joanna Ellington believes that the stress of producing an ejaculate sample for examination, often in an unfamiliar setting and without any lubrication (most lubricants are somewhat harmful to sperm), may explain why men's first samples often show poor results while later samples show normal results.

A man may prefer to produce his sample at home rather than at the clinic. The site of semen collection does not affect the results of a semen analysis.[21]

Volume can be determined by measuring the weight of the sample container, knowing the mass of the empty container. Sperm count and morphology can be calculated by microscopy. Sperm count can also be estimated by kits that measure the amount of a sperm-associated protein, and are suitable for home use.[22]

Computer Assisted Semen Analysis (CASA) is a catch-all phrase for automatic or semi-automatic semen analysis techniques. Most systems are based on image analysis, but alternative methods exist such as tracking cell movement on a digitizing tablet.[23][24] Computer-assisted techniques are most-often used for the assessment of sperm concentration and mobility characteristics, such as velocity and linear velocity. Nowadays, there are CASA systems, based on image analysis and using new techniques, with near perfect results, and doing full analysis in a few seconds. With some techniques, sperm concentration and motility measurements are at least as reliable as current manual methods.[25]