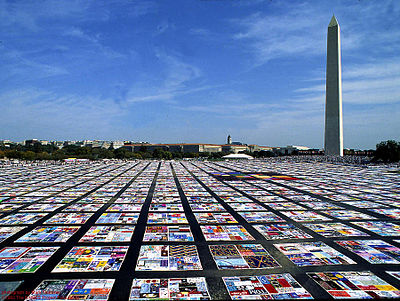 The NAMES Project AIDS Memorial Quilt, often abbreviated to AIDS Memorial Quilt, is an enormous quilt made as a memorial to and celebration of the lives of people who have died of AIDS-related causes. Weighing an estimated 54 tons, it is the largest piece of community folk art in the world as of 2010.

The idea for the NAMES Project Memorial Quilt was conceived in 1985 by AIDS activist Cleve Jones during the candlelight march, in remembrance of the 1978 assassinations of San Francisco Supervisor Harvey Milk and Mayor George Moscone. For the march, Jones had people write the names of loved ones that were lost to AIDS-related causes on signs that would be taped to the San Francisco Federal Building. All the signs taped to the building looked like an enormous patchwork quilt to Jones, and he was inspired.[1] It officially started in 1987 in San Francisco by Jones, Mike Smith, and volunteers Joseph Durant, Jack Caster, Gert McMullin, Ron Cordova, Larkin Mayo and Gary Yuschalk. At that time many people who died of AIDS-related causes did not receive funerals, due to both the social stigma of AIDS felt by surviving family members and the outright refusal by many funeral homes and cemeteries to handle the deceased's remains.[2] Lacking a memorial service or grave site, The Quilt was often the only opportunity survivors had to remember and celebrate their loved ones' lives. The first showing of the The Quilt was 1987 on the National Mall in Washington, DC, The Quilt was last displayed in full on The Mall in Washington, D.C., in 1996.[3]

The Quilt is a memorial to and celebration of the lives of people lost to the AIDS pandemic. Each panel is 3' by 6', approximately the size of the average grave; this connects the ideas of AIDS and death more closely, even though only about 20% of the people lost to AIDS related causes are represented.[4] The Quilt is still maintained and displayed by The NAMES Project Foundation.

In observance of National HIV-Testing Day in June 2004 the 1,000 newest blocks were displayed by the Foundation on the Ellipse in Washington, D.C.[5] The largest display of The Quilt since it was last displayed in its entirety in October 1996, the 1,000 blocks displayed consisted of every panel submitted at or after the 1996 display.

The NAMES Project Foundation is now headquartered in Atlanta, Georgia, and has 21 chapters in the United States and more than 40 affiliate organizations world-wide. The AIDS Memorial Quilt itself is also warehoused in Atlanta when not being displayed, and continues to grow, currently consisting of more than 46,000 individual memorial panels (over 91,000 people) and weighing an estimated 54 tons.[6]

The Goal and Achievement

The goal of the Quilt is to bring awareness to how massive the AIDS pandemic really is, and to bring support and healing to those affected by it. Another goal is to raise funds for community based AIDS service organizations (ASO's), to increase their funding for AIDS prevention and education. As of 1996, more than $1.7 million had already been raised, and the effort continues to this day.[7]

Typically very personalized, individual quilt panels are created by the loved ones of someone who has died of AIDS-related causes. Each 3' by 6' panel is the size of a human grave and the panels are donated to The NAMES Project Foundation where they are grouped with other similar panels and assembled into 12' by 12' sections, called "blocks". These blocks can be seen at local displays of The Quilt, typically containing 8 individual panels.

Techniques used in making panels include patchwork, applique, embroidery, fabric painting, collage, spray paint and needlepoint, along with other methods.

Items and materials included in the panels:

Those who submit panels do not have to know the person, but they do have to feel some sort of connection with the individual that they want people to recognize. For example, to memorialize Queen lead-singer Freddie Mercury, there were many panels made, two of which were a solid white background with a blue and black guitar, and "Freddy Mercury" written down the sides in black, with the AIDS ribbon above his name,[8] and a purple silk with "Freddie Mercury," "Queen," and "1946-1991" in silver applique, along with two pictures of Mercury with Queen.[9]

Many panels were also made for the actor Rock Hudson, one of which consisted of a navy blue background with silver "Rock Hudson" and stars, above a rainbow with the word "Hollywood".[10]

Other panels are made by loved ones and then attached to make one large block. Some are flamboyant and loud, whereas some are more muted and simple; either way they all carry their own set of emotions.[11]

The AIDS Memorial Quilt was the first of its kind as a continually growing monument created piecemeal by thousands of individuals, and today it constitutes the largest piece of community folk art in the world.[15] It was seemingly inevitable that The Quilt be followed by a variety of memorials and awareness projects, both AIDS-related and otherwise, that have been inspired by and modeled after The AIDS Memorial Quilt and its caretaker The NAMES Project Foundation. Examples of these include: