Alcohol dehydrogenases (ADH) (EC 1.1.1.1) are a group of dehydrogenase enzymes that occur in many organisms and facilitate the interconversion between alcohols and aldehydes or ketones with the reduction of nicotinamide adenine dinucleotide (NAD+ to NADH). In humans and many other animals, they serve to break down alcohols that otherwise are toxic, and they also participate in generation of useful aldehyde, ketone, or alcohol groups during biosynthesis of various metabolites. In yeast, plants, and many bacteria, some alcohol dehydrogenases catalyze the opposite reaction as part of fermentation to ensure a constant supply of NAD+.

Genetic evidence from comparisons of multiple organisms, showed that a glutathione-dependent formaldehyde dehydrogenase, identical to a class III alcohol dehydrogenase (ADH-3/ADH5), probably is the ancestral enzyme for the entire ADH family.[2][3] Early on in evolution, an effective method for eliminating both endogenous and exogenous formaldehyde was important and this capacity has conserved the ancestral ADH-3 through time. From genetic duplications of ADH-3, followed by series of mutations, the other ADHs evolved.[2][3] The ability to produce ethanol from sugar is believed to have initially evolved in yeast. This feature is not adaptive from an energetic point of view, but by making alcohol in such high concentrations so that they were toxic to other organisms, yeast cells could effectively eliminate their competition. Since rotting fruit can contain more than 4% of ethanol, animals eating the fruit needed a system to metabolize exogenous ethanol. This was thought to explain the conservation of ethanol active ADH in other species than yeast, though ADH-3 is now known to also have a major role in nitric oxide signaling.[4][5] 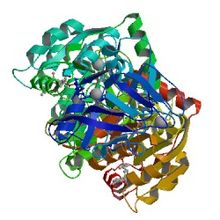 The first ever isolated alcohol dehydrogenase (ADH) was purified in 1937 from Saccharomyces cerevisiae (baker’s yeast).[6] Many aspects of the catalytic mechanism for the horse liver ADH enzyme was investigated by Hugo Theorell and coworkers.[7] ADH was also one of the first oligomeric enzymes that had its amino acid sequence and three dimensional structure determined.[8][9][10]

In early 1960 it was discovered in fruit flies of the genus Drosophila.[11]

The alcohol dehydrogenases comprise a group of several isozymes that catalyse the oxidation of primary and secondary alcohols to aldehydes and ketones, respectively, and also can catalyse the reverse reaction.[11] In mammals this is a redox (reduction/oxidation) reaction involving the coenzyme nicotinamide adenine dinucleotide (NAD+) and cofactor PQQ.

Alcohol dehydrogenase is a dimer with a mass of 80 kDa.[12]

Mechanism of action in humans

The mechanism in yeast and bacteria is the reverse of this reaction. These steps are supported through kinetic studies.[12]

The substrate is coordinated to the zinc and this enzyme has two zinc atoms per subunit. One is the active site, which is involved in catalysis. In the active site, the ligands are Cys-46, Cys-174, His-67, and one water molecule. The other subunit is involved with structure. In this mechanism, the hydride from the alcohol goes to NAD+. Crystal structures indicate that the His-51 deprotonates the nicotinamide ribose, which deprotonates Ser-48. Finally, Ser-48 deprotonates the alcohol, making it an aldehyde.[12] From a mechanistic perspective, if the enzyme adds hydride to the re face of NAD+, the resulting hydrogen is incorporated into the pro-R position. Enzymes that add hydride to the re face are deemed Class A dehydrogenases. 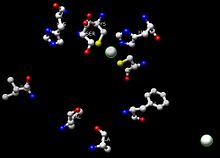 The active site of alcohol dehydrogenase 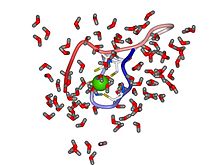 Mammalian alcohol dehydrogenases also has a structural zinc site. This Zn ion plays a structural role and is crucial for protein stability. The structures of the catalytic and structural zinc sites in horse liver alcohol dehydrogenase (HLADH) as revealed in crystallographic structures, which has been studied computationally with quantum chemical as well as with classical molecular dynamics methods. The structural zinc site is composed of four closely spaced cysteine ligands (Cys97, Cys100, Cys103, and Cys111 in the amino acid sequence) positioned in an almost symmetric tetrahedron around the Zn ion. A recent study showed that the interaction between zinc and cysteine is governed by primarily an electrostatic contribution with an additional covalent contribution to the binding.[13]

In humans, ADH exists in multiple forms as a dimer and is encoded by at least seven different genes. There are five classes (I-V) of alcohol dehydrogenase, but the hepatic form that is primarily used in humans is class 1. Class 1 consists of α, β, and γ subunits that are encoded by the genes ADH1A, ADH1B, and ADH1C.[14] The enzyme is present at high levels in the liver and the lining of the stomach.[15] It catalyzes the oxidation of ethanol to acetaldehyde:

This allows the consumption of alcoholic beverages, but its evolutionary purpose is probably the breakdown of alcohols naturally contained in foods or produced by bacteria in the digestive tract as alcohols are relatively 'empty' calories, providing little net nutritional benefit.[16]

Another evolutionary purpose may be metabolism of the endogenous alcohol vitamin A (retinol), which generates the hormone retinoic acid, although the function here may be primarily the elimination of toxic levels of retinol.[17]

Alcohol dehydrogenase is also involved in the toxicity of other types of alcohol: For instance, it oxidizes methanol to produce formaldehyde and ethylene glycol to ultimately yield glycolic and oxalic acids. Humans have at least six slightly different alcohol dehydrogenases. Each is a dimer (i.e., consists of two polypeptides), with each dimer containing two zinc ions Zn2+. One of those ions is crucial for the operation of the enzyme: It is located at the catalytic site and holds the hydroxyl group of the alcohol in place.

Alcohol dehydrogenase activity varies between men and women, between young and old, and among populations from different areas of the world. For example, young women are unable to process alcohol at the same rate as young men because they do not express the alcohol dehydrogenase as highly, although, the inverse is true among the middle-aged.[18] The level of activity may not be dependent only on level of expression but also on allelic diversity among the population.

Unlike humans, yeast and bacteria (except lactic acid bacteria, and E. coli in certain conditions ) do not ferment glucose to lactate. Instead, they ferment it to ethanol and CO2. The overall reaction can be seen below:

In yeast[20] and many bacteria, alcohol dehydrogenase plays an important part in fermentation: pyruvate resulting from glycolysis is converted to acetaldehyde and carbon dioxide, and the acetaldehyde is then reduced to ethanol by an alcohol dehydrogenase called ADH1. The purpose of this latter step is the regeneration of NAD+, so that the energy-generating glycolysis can continue. Humans exploit this process to produce alcoholic beverages, by letting yeast ferment various fruits or grains. It is interesting to note that yeast can produce and consume their own alcohol.

Brewer's yeast also has another alcohol dehydrogenase, ADH2, which evolved out of a duplicate version of the chromosome containing the ADH1 gene. ADH2 is used by the yeast to convert ethanol back into acetaldehyde, and it is only expressed when sugar concentration is low. Having these two enzymes allows yeast to produce alcohol when sugar is plentiful (and this alcohol then kills off competing microbes), and then continue with the oxidation of the alcohol once the sugar, and competition, is gone.[21]

In plants, ADH catalyses the same reaction as in yeast and bacteria to ensure that there is a constant supply of NAD+.Maize has two versions of ADH - ADH1 and ADH2, Arabidopsis thaliana contains only one ADH gene. The structure of Arabidopsis ADH is 47% conserved, relative to ADH from horse liver, structurally and functionally important residues, such as the seven residues that provide ligands for the catalytic and noncatalytic zinc atoms, however are conserved suggesting that the enzymes have a similar structure.[22] ADH is constitutively expressed at low levels in the roots of young plants grown on agar, if the roots lack oxygen, the expression of ADH increases significantly.[23] Its expression is also increased in response to dehydration, low temperatures and to abscisic acid and it plays an important role in fruit ripening, seedling and pollen development.[24] Differences in the sequences of ADH in different species have been used to create phylogenies showing how closely related different species of plants are.[25] It is an ideal gene to use due to its convenient size (2–3 kb in length with a ~1000 nucleotide coding sequence) and low copy number.[24]

A further class of alcohol dehydrogenases belongs to quinoenzymes and requires quinoid cofactors (e.g., pyrroloquinoline quinone, PQQ) as enzyme-bound electron acceptors. A typical example for this type of enzyme is methanol dehydrogenase of methylotrophic bacteria.

In fuel cells, alcohol dehydrogenases can be used to catalyze the breakdown of fuel for an ethanol fuel cell. Scientists at Saint Louis University have used carbon-supported alcohol dehydrogenase with poly(methylene green) as an anode, with a nafion membrane, to achieve about 50 μA/cm2.[33]

In biotransformation, alcohol dehydrogenases are often used for the synthesis of enantiomerically pure stereoisomers of chiral alcohols. In contrast to the chemical process, the enzymes yield directly the desired enatiomer of the alcohol by reduction of the corresponding ketone.

There have been studies showing that ADH may have an influence on the dependence on ethanol metabolism in alcoholics. Researchers have tentatively detected a few genes to be associated with alcoholism. If the variants of these genes encode slower metabolizing forms of ADH2 and ADH3, there is increased risk of alcoholism. The studies have found that mutations of ADH2 and ADH3 are related to alcoholism in Asian populations. However, research continues in order to identify the genes and their influence on alcoholism.[34]

Drug dependence is another problem associated with ADH, which researchers think might be linked to alcoholism. One particular study suggests that drug dependence has seven ADH genes associated with it. These results may lead to treatments that target these specific genes. However, more research is necessary.[35]