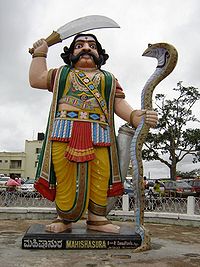 A statue of Mahishasura in Chamundi Hills, Mysore.

In Hindu mythology, Mahishasura was an asura.

Mahishasura's father Rambha was king of the asuras,and he once fell in love with a water buffalo (Princess Shyamala, cursed to be a buffalo); Mahishasura was born out of this union. He is therefore able to change between human and buffalo form at will (mahisha is Sanskrit word for buffalo). 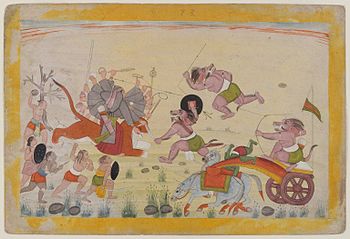 This painting shows a pivotal battle between Durga and a powerful demon named Mahasura. The demon, with an animal head and purple skin, appears three times, attacking the goddess with bow and arrow, sword and shield, and trident (this weapon is shown snapped in two, a sign that he will eventually lose). 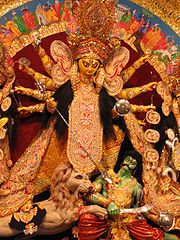 Durga is worshiped in her Mahishasuramardini form, during Durga Puja

After this, he started terrorising Heaven (Swarga Loka) and earth (Prithvi). He invaded heaven, defeating the king of gods Indra, and drove all the gods (devas) out of heaven.

The gods then went into conclave to decide what could be done with this invincible asura. Since he was invincible to all men, they created his nemesis in the form of a young woman, Durga (a form of Shakti or Parvati). She combined the powers of all the devas in a beautiful form. According to one legend, the goddess Durga created an army to fight against the forces of the demon-king Mahishasura, who was terrorizing Heaven and Earth. After nine days of fighting, during which Mahishasura's army was decimated, she finally killed him on the tenth day of the waxing moon. Durga is therefore called Mahishasuramardini (literally the slayer of the buffalo demon), the destroyer of Mahishasura. During several battles, she appears in her incarnation of Kali; particularly while fighting Raktabija, who has the magic boon that every drop of blood falling from him to the ground will become another Raktabija (literally the blood borne). Here Kali spreads her giant tongue and drinks up all the blood before it falls to the earth.

The event is celebrated in various versions as Durga Puja in Bihar, Bengal and Orissa, and as Dussehra and navaratri in other parts of India, celebrating this victory of good over evil.

His story is found in the Devi Mahatmya (Glory of the Goddess) text within the Markandeya Purana.