The Air Training Corps or ATC is one of the three corps in the New Zealand Cadet Forces, the other two being the New Zealand Cadet Corps and Sea Cadet Corps. It is funded in partnership between the RNZAF and communities, and its members are civilians. Members have no obligation to head into the regular force, however some do choose to join New Zealand Defence Force. Unlike the United States Civil Air Patrol, service as an ATC cadet does not translate into higher pay, rank, or seniority in the NZDF.

The Air Training Corps was formed in September 1941, at a time when New Zealand was considered to be at risk from Japanese invasion and the British were not in a position to help. Its purpose was to train potential airmen in basic knowledge and provide an insight into Air Force work to prepare young men for the RNZAF when they became of age.

Compulsory Military Training (CMT) was reintroduced for all males of 18 years of age in 1951. The rate of increase in the cadet movement from 1948 to 1960 eventually proved counter-productive in the 1960s, as the Army could not effectively support the numbers while meeting their own commitments.

Compulsory Military Training was abolished again in 1958 and replaced by the ballot system of conscripted service for randomly selected 20-year-old males, which operated between 1960 and 1970. By 1964 the Cadet Forces reached a peak strength of 198 units, with 1000 officers and about 54,000 cadets.

Reorganisation saw many schools cease cadet support and by 1970 Sea Cadet and Air Training Corps (ATC) units had decreased to 55 units with 3,200 cadets.

In 1970 the government announced the decision to cease funding Cadets from the Defence budget. After community representation, the 1971 Defence Act established the New Zealand Cadet Force as a volunteer organisation, for which the Minister of Defence was responsible. Open units were required to be initiated and funded by the community and the Chief of Defence Forces was authorised to “direct and supervise” the Cadet Forces and provide military support which was initially confirmed as uniforms, training and some equipment at a cost of no greater than $400,000.

Centralised supervision was established by the Chief of Defence Forces of all three Corps and a Commandant appointed with Regular Force Defence personnel, under the control of the Commandant, provided at 5 locations around New Zealand to support units. Cadet Force officers were appointed by the Minister of Defence with Cadet Force commissions, on a voluntary unpaid basis with authority to wear military uniform and rank.

Female cadets were accepted from approximately 1978.

By 1985 the ATC had increased to 50 units. A resurgence of interest since 1989, attributed to the movies Top Gun and Iron Eagle and the like, saw unit numbers fluctuate around 100 units; many in areas which did not previously have Cadet units.

At the beginning of the second decade of the 21st Century, there were 103 Cadet Force units In New Zealand, and cadet numbers approximate 4500 with 360 cadet officers.

The ATC is managed at a national level by the Commandant (usually a Regular Force Lieutenant-Colonel/Wing Commander/Commander), and his/her Staff at Defence Force Headquarters in Wellington. It is supported by the Air Training Corps Association of New Zealand (ATCANZ). 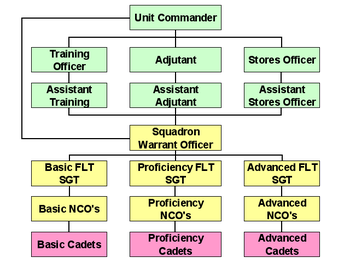 Each unit is managed by the Cadet Unit Commander, in partnership with the unit's branch of the ATCANZ. A typical unit has between one and four officers with various roles. The Cadet Unit Commander appoints all personnel in the unit to their positions. Each unit has an Adjutant, Training Officer and Stores Officer. These positions are often filled by a commissioned officer (officers can hold multiple positions if necessary). One or more of the positions may have assistants, the assistants are often junior officers or Cadet Under Officers.

Each unit also has a cadet NCO holding the position of Warrant Officer (who doesn't necessarily hold the rank of Cadet Warrant Officer). If the unit is large enough, each flight of cadets may have a Flight Sergeant. The Warrant Officer is normally responsible for supervising the NCOs in their various tasks, as a result the Warrant Officer can skip the normal chain of command, enabling them to liaise directly with the Unit Commander.

How an individual unit is organised varies widely. A unit's organization depends on its size, number of officers, number of Cadet NCOs, facilities, and the organisational preference of the Cadet Unit Commander.

Cadet units are graded on their parading numbers, which dictates the number of officers each unit may have, and the number of Corporals, Sergeants, Flight Sergeants and Under Officers.

The cadets wear a cloth ATC cap badge on their flight caps, while officers wear the same cap insignia as RNZAF officers. Cadets wear a shoulder brassard. Cadets achievements such as a Duke of Edinburgh's Award, flying/navigation badge, marksman badge and training level badges are worn on the brassard, as well as the number and name of the squadron they parade with. Officers who were formerly cadets do not wear their cadet awards on their uniform.

Long service with the Cadet Forces is recognised with the Cadet Force Medal, awarded to NZCF Officers only, after 12 consecutive years of service. Your qualification period for the CFM starts from when you are 18 AND a Cadet Under Officer rank or higher.

Cadets can join between the ages of 13 to 15 and can stay on without promotion to the age of 18. Units provide uniform, bonds used to be held to ensure that they are returned, but this no longer occurs. Unit fees are set by each unit annually, but are normally around $100 per year, dependant on the type of activities the unit has planned. Cadets may in time be promoted to NCO ranks. Cadet NCO ranks are based on the RNZAF ranks, and are:

The exceptions are that in the RNZAF, Under Officer is not a rank and LAC stands for Leading Aircraftman.

However, not all cadets become NCOs, but all get the chance to train and progress through the different levels of training, Basic, Proficiency, and Advanced levels, by demonstrating knowledge and skills in cadet knowledge, service knowledge, leadership, weapons safety, and aviation.

As of early 2007, Chief of Air Staff has accepted the introduction of Cadet Leading Air Cadet (LAC). This is not technically an NCO rank but will be awarded to those cadets showing obvious leadership skills or to give seniority to long serving or older cadets who may not otherwise have been given a chance to go on a junior leader's course. This is the Corps equivalent to the NZCC Lance Corporal. Qualifications for this is as per the following:

Adult Members can serve in two capacities: Commissioned Officers or Civilian Instructors, known as Supplementary Instructors. Officers are commissioned into the New Zealand Cadet Forces, with the post-nominal letters NZCF, at the rank of Pilot Officer, and can be promoted to Flying Officer, and Flight Lieutenant after completing the necessary training and service. The Rank of Squadron Leader is reserved for Unit Commanders who have completed command training. Supplementary Instructors are civilians who help train cadets. They do not wear uniform, but they are generally treated similarly to officers by cadets. They are addressed as "Sir" or "Ma'am".

Every unit holds Parade Nights around 2–4 hours long weekly during School Terms. Each parade night usually begins and ends with a parade. The starting parade is used to raise the RNZAF ensign, to inspect uniforms, and to inform the cadets on the parade night's activities. The final parade is used to lower the RNZAF ensign, and to inform the cadets on upcoming events in the unit. Between the parades, the cadets undergo classroom, or practical instruction.

Units teach aviation theory as part of the parade nights, and units typically organise practical Flying Training for the cadets in partnership with local Aero Clubs. There is an annual National Aviation Course, consisting of separate Flying and Navigation flights. Those that opt for the Flying component spend two weeks covering both theory and practical lessons in flying, with First Solo being a common achievement. The Navigation component is a 1-week long theoretical and practical course covering the NZ CAA Private Pilot Licence syllabus. The practical content included 4 navigation flights building up from an initial 30min map reading exercise to a full 1hr 30min Nav ex covering a min of 3 waypoints and 100 nautical miles (190 km) distance.

As with Flying, Gliding Training is organised by the unit in partnership with local Gliding Clubs. There are 2 concurrent annual 1-week long Gliding Courses, where cadets participate in Gliding. One at Matamata, and the other at Waipukurau. Cadets from all over New Zealand attend these week long courses.

Units conduct regular range training with smallbore rifles. Some units have their own armouries and ranges at their parade hall. Cadets must pass a TOET (Test of Elementary Training) before being allowed on the range. Cadets who achieve highly(80% or higher) on the range may be awarded a marksmanship badge which is then worn on their brassard.

At some point in the year, nominated squadrons are inspected by their Area Co-ordinator. He judges them on drill, knowledge, and general efficiency in running the unit. Each area selects an area winner and then the 3 area winners compete for the National Efficiency Trophy. In 2009 the 3 Area winners were 3 (City of Auckland) Sqn (Northern), No.8 (New Plymouth) Sqn (Central) and No.18 (Avon) Sqn (Southern).

The 2010 National Efficiency Trophy was awarded to No. 17 (City of Christchurch) Sqn.