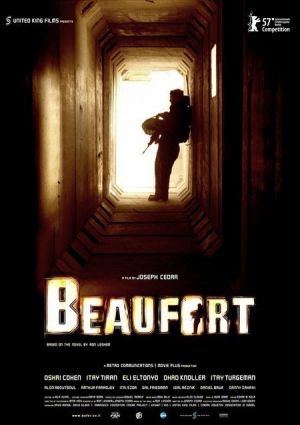 "Beaufort" (original _he. בופור) is a 2007 -nominated . The was directed by and was co-written by Cedar and , based on Leshem's acclaimed novel of the same name (originally "If There is a Heaven"). [cite web|url=http://www.randomhouse.com/catalog/display.pperl?isbn=9780553806823 |title=Beaufort - Random House |accessdate=2008-01-24 |publisher=""] The film is about an IDF unit stationed at the Beaufort post in during the South Lebanon conflict, and their commander, Liraz Librati, who was the last commander of the Beaufort castle before the Israeli withdrawal in 2000.

The film takes place in the year 2000, the year of the IDF withdrawal from the in . It chronicles the daily routine of a group of soldiers positioned at the 12th century Crusader stronghold of Beaufort Castle, their feelings and their fears, and explores their moral dilemmas in the days preceding the withdrawal and end of the 18-year South Lebanon conflict.

The film's director, himself an IDF veteran who was stationed in Lebanon during the first Lebanon war,

Filming was completed in June, just a month before the second war in Lebanon broke out.

"Beaufort" was generally well received by critics. As of , , the review aggregator reported that 88% of critics gave the film positive reviews, based on 40 reviews. [cite web|url=http://www.rottentomatoes.com/m/1191162-_beaufort/ |title=Beaufort - Rotten Tomatoes |accessdate=2008-01-23 |publisher=""] Lisa Schwarzbaum of gave it an A, calling it "a movie of tremendous power - nerve-racking, astute, and neutral enough to apply to all soldiers, in all wars, everywhere". [cite web|url=http://www.ew.com/ew/article/0,,20172267,00.html |title=Beaufort - Entertainment Weekly |accessdate=2008-01-28 |publisher=""]
of wrote: "Even if it does not entirely rise above cliché, 'Beaufort' has an earnest, sober intelligence that makes it hard to shake. It suggests that, for those who fight, the futility of war is inseparable from its nobility."

, an Israeli war hero who was an Israel Defense Forces high commander in Lebanon (he was replaced by several months before the withdrawal), said that the film "successfully depicts, in great detail, the military experience".

"Beaufort" is one of the most successful Israeli films of the aughts. It made more than 500,000 in the first 3 weeks of its release in the Israeli market, a substantial amount for a domestic Israeli film. Since its release, it was viewed by over 300,000 viewers in Israel.

Cedar has won the Silver Bear in the for directing "Beaufort", which is his third film. The film was nominated for the [cite press release | title = 80th Academy Awards Nominations Announced | publisher = | date = | url = http://www.oscars.org/press/pressreleases/2008/08.01.22.html | accessdate = 2008-01-22] , the first such nomination for an Israeli film since "" (1984) and the ninth overall. In Israel it won 4 Ofir Academy Awards, including Best Cinematography, Best Film Editing, Best Artistic Design and Best Soundtrack. It was also nominated for Best Picture, although the award went to "", making "Beaufort" the first film directed by Cedar to not win this award. "The Band's Visit"'s status as a foreign language film in the Academy Awards was rejected because it contains over 50% dialogue in English, which caused the runner-up "Beaufort" to become Israel's submission instead.

The casting has raised serious public criticism in Israel, especially from families of slain soldiers and war veterans, given the fact that some of the actors did not serve in the Israeli army (Army service is compulsory in Israel, although some people are exempt). Cedar commented that the actors had to spend a month at an actual outpost preparing for their roles, and that "Israel may be the only place where actors are expected to have actual combat experience when playing soldiers in a movie".

It was rumored that it was the filmmakers of "Beaufort" who brought to the Academy's attention the ineligibility, on language grounds, of "The Band's Visit". "Beaufort"'s makers denied this rumor.