:"This is about the film; bandits as a general term refers to thieves."Infobox_Film
name = Bandits 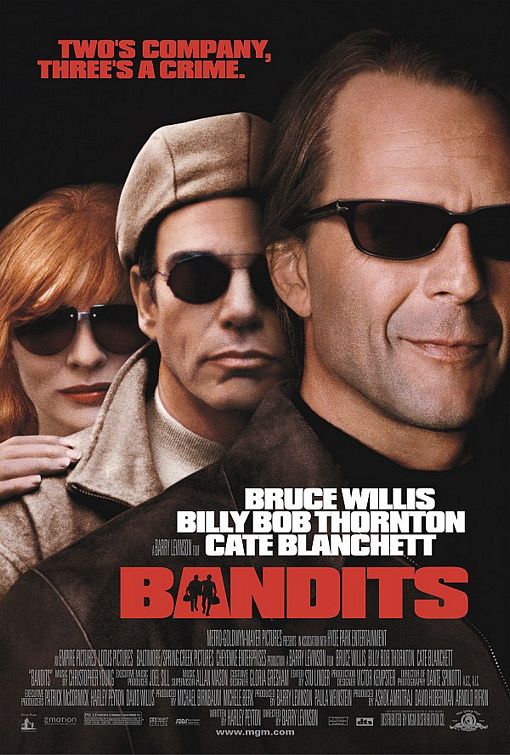 "Bandits" is a 2001 comedy/crime/drama/romance movie directed by . It stars , , and . Filming began in October 2000 and ended in February 2001. It helped Thornton earn a National Board of Review Best Actor Award for 2001. Billy Bob Thornton and Cate Blanchett were nominated for Supporting Actor and Actress Golden Globes for their performances in this film. The film's release and box office intake was marred by the initial Anthrax attacks at NBC on the morning of its release.

Two friends and convicts, one charismatic Joe, (), the other neurotic and hypochondriac Terry, () break out of in a cement truck and start a bank robbing spree, hoping to fund a dream they share. They become known as the "Sleepover Bandits" because of their "": they kidnap the manager of a target bank the night before a planned robbery, then spend the night with the manager's family; early the next morning, they accompany the manager to the bank to get their money. Using dim-witted would-be stunt man Harvey Pollard () as their getaway driver and lookout, the three successfully pull off a series of robberies that gets them recognition on the 's Ten Most Wanted list.

When a housewife with a failing marriage () decides to run away, she ends up in the hands of the criminals. Initially attracted to Joe, she also ends up in bed with Terry and a confused begins.

The three of them run away and manage to pull off a few more robberies, but after a while the two begin to fight over Kate, and she decides to leave them. The two criminals then decide to pull off one last job.

The story is told in , framed by the story of the pair's last robbery of the Alamo Bank, as told by "Criminals at Large", a fictional show. The show tells the story of the last job to be a failure when Kate tips off the police and the two are caught in the act. The two then begin to argue when Joe tells the police "You won't take us alive!" and the argument gets to the point where the two of them shoot each other dead.

But at the end of the film the real story behind the last job is revealed, Harvey used some of his special effects to make it seem as though Terry and Joe were shooting each other. Harvey and his girlfriend then ran in dressed as paramedics and placed the stolen money, Terry, and Joe in body bags. In the ambulance, Harvey uses electronics to blow out his tires which sends the ambulance into a junkyard. Under Harvey's jumpsuit, he's wearing a fire suit. He lights him self on fire and rigs a bomb to go off. Kate, Harvey, Harvey's girlfriend, Terry, and Joe flee the scene, leading officials to believe the bodies were burned.

Reunited, Joe, Terry, Harvey and Kate make it to Mexico to live out their dream. The last scene shows Harvey getting married in Mexico and Kate kisses Joe and Terry passionately.

* The story is (very loosely) based on the real-life exploits of and , who, during the 1980s, staged a series of successful bank robberies using the "sleepover" method. (Both Dougherty and Conners had committed several solo bank robberies before joining forces.) Producer Michael Birnbaum brought the true life story to writer Harley Peyton, a frequent collaborator, and together they developed the script that was to become "Bandits". It was originally titled "Outlaws: A Love Story".

* The song "Kill the Rock" by was used prominently in the film, but was not included on the soundtrack CD.

* When Terry wakes up saying "Beavers and Ducks", it's a reference to two arch-rival Oregon college football teams, the Beavers and the Ducks.

* The interior of the reporter's house in which Joe and Terry film their interview is the by architect John Lautner. It was also used in "" (1998).

* The little girl who belches during the dinner scene is Bruce Willis' daughter, Scout... and according to him, that belch was not enhanced. The other girl is another one of Willis' daughters, Tallulah.

* has phobias, including one of antique furniture, in real life, and the producers wrote them in as part of his character.

* At the cabin right after they "pick up" Kate, Joe stretches a drape between the two sides of the bed, saying he saw it in a movie once. This is a reference to a scene which takes place in "" where Peter (Gable) places a sheet between his and Ellie's (Colbert) beds. Kate then asks, "How does [the movie] end?" Joe says, "With a wedding." At the end of the movie Harvey marries the Pink Boots girl.

* Director Cameo: - The last staff to the right of the camera in the studio room from Darren's point of view when he presented "Criminals at Large" at the beginning of the film.

* Producer Cameo: - The desk sergeant near the end of the film when Cate Blanchett goes to the police station to turn herself in.

* was the only choice for the music composing. However, Zimmer was just finishing "Hannibal" and "Pearl Harbor" at the time in London, and he already committed himself to "Black Hawk Down", which was recorded in the US. Barry Levinson said that he would move the film for a later release, waiting for the German composer, since they are good friends since "". Zimmer politely refused it. The second choice was , who was interested but, ultimately, was unable to fit the film's score into his schedule.

* The green car Billy Bob Thornton drives after the second bank robbery is a 505 and the black one he parks in front of the Flamingo hotel is a DS, which are both French automobiles.

Song in bandits- by truitt for brooke