Ulleungdo (also spelled Ulreungdo; Korean pronunciation: [ulːɯŋdo]) is a South Korean island in the Sea of Japan (East Sea). Formerly known as Dagelet to the Europeans, Ulleungdo is about 120 km (75 mi) east of the Korean Peninsula. Volcanic in origin, the rocky steep-sided island is the top of a large stratovolcano which rises from the seafloor, reaching a maximum elevation of 984 metres (3,228 ft) at Seonginbong Peak. The island consists primarily of trachyandesite rock. A major explosive eruption about 9,350 years ago reached a Volcanic Explosivity Index of 6 and deposited tephra as far as central Honshū over 800 km (500 mi) away, while producing pyroclastic flows on the island and decapitating its top to form a caldera.

The island of Ulleungdo has an area of 73.15 km2 (28.24 sq mi) with about 10,000 inhabitants. It makes up the main part of Ulleung County, North Gyeongsang Province, South Korea. The main city of Ulleungdo is the port of Dodong, which serves as the main ferry port between Ulleungdo and the Korean mainland. Ulleungdo is a popular tourist site. The other main economic activity is fishery, including the harvest of cuttlefish, which can be seen drying in the sun in many places on Ulleungdo. Most Koreans know the island for its cuttlefish.

Archaeological evidence indicates that the island has been inhabited since the 1st millennium BC. The first confirmed historical reference to Ulleungdo is in the Samguk Sagi for the year 512. In that year, the Silla general Kim Isabu conquered the island, which had previously been the autonomous nation of Usan-guk. Some accounts relate that he used a number of wooden lions to intimidate the population, threatening to turn them loose unless they surrendered.

Usan-guk did not remain under the Silla yoke, however, and the island did not become a permanent political part of Korea until 930, when it was annexed by Goryeo. Remote as it is from the Korean mainland, Ulleungdo was a recurrent security headache for the Goryeo and Joseon dynasties. It was devastated by Jurchen pirate raids in the 11th century, and by Wokou pirate raids in the 14th century. A clash with Japan over fishing rights in the 1690s was precipitated by the Korean fisherman An Yong-bok. In response to these difficulties, Joseon adopted an "empty-island" policy which however proved impossible to enforce. The empty-island policy was officially rescinded in 1881, after which the government sought to encourage additional settlement of Ulleungdo. 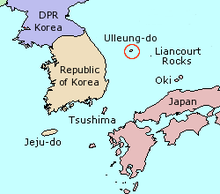 Favorite activities for tourists are hiking, fishing, and eating hoe (a Korean raw fish dish). Sightseeing boats make regular three-hour circuits about Ulleungdo, departing from the harbor at Dodong and passing by all the points of interest along the coast, including many interesting rock formations and the small neighboring island of Jukdo. Other scenic sites are Seonginbong, the highest peak on the island (984 m); Bongnae waterfall; the "natural icehouse"; and a coastal cliff from which Liancourt Rocks can be discerned in the distance.

Once upon a time, a widowed old man was living with his daughter, and one year, they ran out of the corn they saved to eat during the winter period so the old man had to go to the ocean to catch fish. Then one day, the old man went to the sea, but did not come back. The daughter cried and waited for her dad, but nothing happened. The daughter who lost her father, drenched in grief and forgetting to eat, spent her time overlooking the sea. Then the daughter suddenly had a feeling that her father was coming back. So she went to the beach and she saw a small white sail boat coming towards her. But while she was waiting and waiting for the boat to come, the boat did not reach the shore. She could not wait for the boat so she decided to go to the boat, even though there were wild waves. But she could not beat the sea. Tired and exhausted, she was not able to get further and became a stone in that place. Since then, people called that rock as the HyoNyuh Rock (Filial Daughter Rock), or ChotDae Rock (Candlestick Rock).

Ulleungdo has a humid subtropical climate Köppen Cfa, though it resembles the west coast of Japan much more than Korea, since in winter rainfall is heavy if less so than in such wet cities as Kanazawa or Akita. Sunshine is also very low in the winter if again not so markedly as in the previously-mentioned Japanese cities.