Adenosine is a purine nucleoside comprising a molecule of adenine attached to a ribose sugar molecule (ribofuranose) moiety via a β-N9-glycosidic bond.

Adenosine plays an important role in biochemical processes, such as energy transfer—as adenosine triphosphate (ATP) and adenosine diphosphate (ADP)—as well as in signal transduction as cyclic adenosine monophosphate, cAMP. It is also an inhibitory neurotransmitter, believed to play a role in promoting sleep and suppressing arousal, with levels increasing with each hour an organism is awake.

Adenosine is an endogenous purine nucleotide that modulates many physiological processes. Cellular signaling by adenosine occurs through four known adenosine receptor subtypes (A1, A2A, A2B, and A3).[1]

Extracellular adenosine concentrations from normal cells are approximately 300 nM; however, in response to cellular damage (e.g. in inflammatory or ischemic tissue), these concentrations are quickly elevated (600–1,200 nM). Thus, in regard to stress or injury, the function of adenosine is primarily that of cytoprotection preventing tissue damage during instances of hypoxia, ischemia, and seizure activity. Activation of A2A receptors produces a constellation of responses that in general can be classified as anti-inflammatory.[citation needed]

Adenosine is believed to be an anti-inflammatory agent at the A(2A) receptor.[2][3] Topical treatment of adenosine to foot wounds in diabetes mellitus has been shown in lab animals to drastically increase tissue repair and reconstruction. Topical administration of adenosine for use in wound healing deficiencies and diabetes mellitus in humans is currently under clinical investigation.

Methotrexate's anti-inflammatory effect may be due to its stimulation of adenosine release.

Action on the heart

When administered intravenously, adenosine causes transient heart block in the Atrioventricular (AV) node. This is mediated via the A1 receptor, inhibiting adenylyl cyclase, reducing cAMP and so causing cell hyperpolarization by increasing outward K+ flux. It also causes endothelial dependent relaxation of smooth muscle as is found inside the artery walls. This causes dilation of the "normal" segments of arteries; i.e. where the endothelium is not separated from the tunica media by atherosclerotic plaque. This feature allows physicians to use adenosine to test for blockages in the coronary arteries, by exaggerating the difference between the normal and abnormal segments.

Fast rhythms of the heart that are confined to the atria (e.g., atrial fibrillation, atrial flutter) or ventricles (e.g., monomorphic ventricular tachycardia) and do not involve the AV node as part of the re-entrant circuit are not typically converted by adenosine. However, the ventricular response rate is temporarily slowed with adenosine in such cases.

Because of the effects of adenosine on AV node-dependent SVTs, adenosine is considered a class IV antiarrhythmic agent. When adenosine is used to cardiovert an abnormal rhythm, it is normal for the heart to enter ventricular asystole for a few seconds. This can be disconcerting to a normally conscious patient, and is associated with angina-like sensations in the chest.[5] 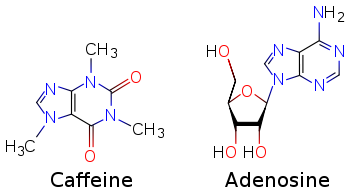 Caffeine's principal mode of action is as an antagonist of adenosine receptors in the brain.

By nature of caffeine's purine structure[6] it binds to some of the same receptors as adenosine.[6] The pharmacological effects of adenosine may therefore be blunted in individuals who are taking large quantities of methylxanthines (e.g., caffeine, found in coffee and tea, or theobromine, as found in chocolate). [7][citation needed]

Action in the central nervous system

Generalized, adenosine has an inhibitory effect in the central nervous system (CNS). Caffeine's stimulatory effects, on the other hand, are primarily (although not entirely) credited to its inhibition of adenosine by binding to the same receptors, and therefore effectively blocking adenosine receptors in the CNS. This reduction in adenosine activity leads to increased activity of the neurotransmitters dopamine and glutamate.

When given for the evaluation or treatment of a supraventricular tachycardia (SVT), the initial dose is 6 mg, given as a rapid parenteral infusion. Due to adenosine's extremely short half-life, the IV line is started as proximal (near) to the heart as possible, such as the cubital fossa. The IV push is often followed with an immediate flush of 10-20ccs of saline. If this has no effect (i.e. no evidence of transient AV block), a 12 mg dose can be given 1–2 minutes after the first dose. AHA 2010 IS NO LONGER RECOMMENDING A SECOND DOSE OF 12MG. PLEASE VIEW ALGORITHM AS CONFIRMATION. Some clinicians may prefer to administer a higher dose (typically 18 mg), rather than repeat a dose that apparently had no effect. When given to dilate the arteries, such as in a "stress test", the dosage is typically 0.14 mg/kg/min, administered for 4 or 6 minutes, depending on the protocol.

The recommended dose may be increased in patients on theophylline since methylxanthines prevent binding of adenosine at receptor sites. The dose is often decreased in patients on dipyridamole (Persantine) and diazepam (Valium) because adenosine potentiates the effects of these drugs. The recommended dose is also reduced by half in patients who are presenting congestive heart failure, myocardial infarction, shock, hypoxia, and/or hepatic or renal insufficiency, and in elderly patients.

Dopamine may precipitate toxicity in the patient. Carbamazepine may increase heart block. Theophylline and caffeine (methylxanthines) competitively antagonize adenosine's effects; an increased dose of adenosine may be required. Dipyridamole potentiates the action of adenosine, requiring the use of lower doses.

Common Contraindications for adenosine are:

In Wolff-Parkinson-White syndrome, adenosine may be administered if equipment for cardioversion is immediately available as a backup.

Adenosine used as a second messenger can be the result of de novo purine biosynthesis via adenosine monophosphate (AMP), though it is possible other pathways exist.[9]

When adenosine enters the circulation, it is broken down by adenosine deaminase, which is present in red cells and the vessel wall.

Dipyridamole, an inhibitor of adenosine deaminase, allows adenosine to accumulate in the blood stream. This causes an increase in coronary vasodilatation.

Adenosine deaminase deficiency is a known cause of immunodeficiency.

The adenosine analog, NITD008 has been reported to directly inhibit the recombinant an RNA-dependent RNA polymerase of the dengue virus by terminating its RNA chain synthesis. This suppresses peak viremia, rise in cytokines and prevented infected animal from death raising the possibility of a new treatment for this flavivirus.[10] The 7-deaza-adenosine analog has been shown to inhibit the replication of the hepatitis C virus.[11] Such adenosine analogs are potentially clinically useful since they can be taken orally.