Acetal
For the plastic, see Polyoxymethylene plastic.
Not to be confused with Acetyl. 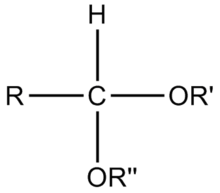 Structure of a generic acetal

An acetal is a molecule with two single-bonded oxygen atoms attached to the same carbon atom.

Formation of an acetal occurs when the hydroxyl group of a hemiacetal becomes protonated and is lost as water. The carbocation ion that is produced is then rapidly attacked by a molecule of alcohol. Loss of the proton from the attached alcohol gives the acetal.

Acetals are stable compared to hemiacetals but their formation is a reversible equilibrium as with esters. As a reaction to create an acetal proceeds, water must be removed from the reaction mixture, for example, with a Dean-Stark apparatus, lest it will hydrolyse the product back to the hemiacetal. The formation of acetals reduces the total number of molecules present and therefore is not favourable with regards to entropy. A way to improve this is to use an orthoester as a source of alcohol. Aldehydes and ketones undergo a process called acetal exchange with orthoesters to give acetals. Water produced along with the acetal product is used up in hydrolysing the orthoester and producing more alcohol to be used in the reaction.

Most glycosidic bonds in carbohydrates and other polysaccharides are acetal linkages.[2] Acetaldehyde diethyl acetal is an important flavouring compound in distilled beverages.[3]

The plastic known as acetal is a polyacetal of formaldehyde.

Acetals are used as protecting groups for carbonyl groups in organic synthesis as they are stable with respect to hydrolysis by bases and with respect to many oxidizing and reducing agents.