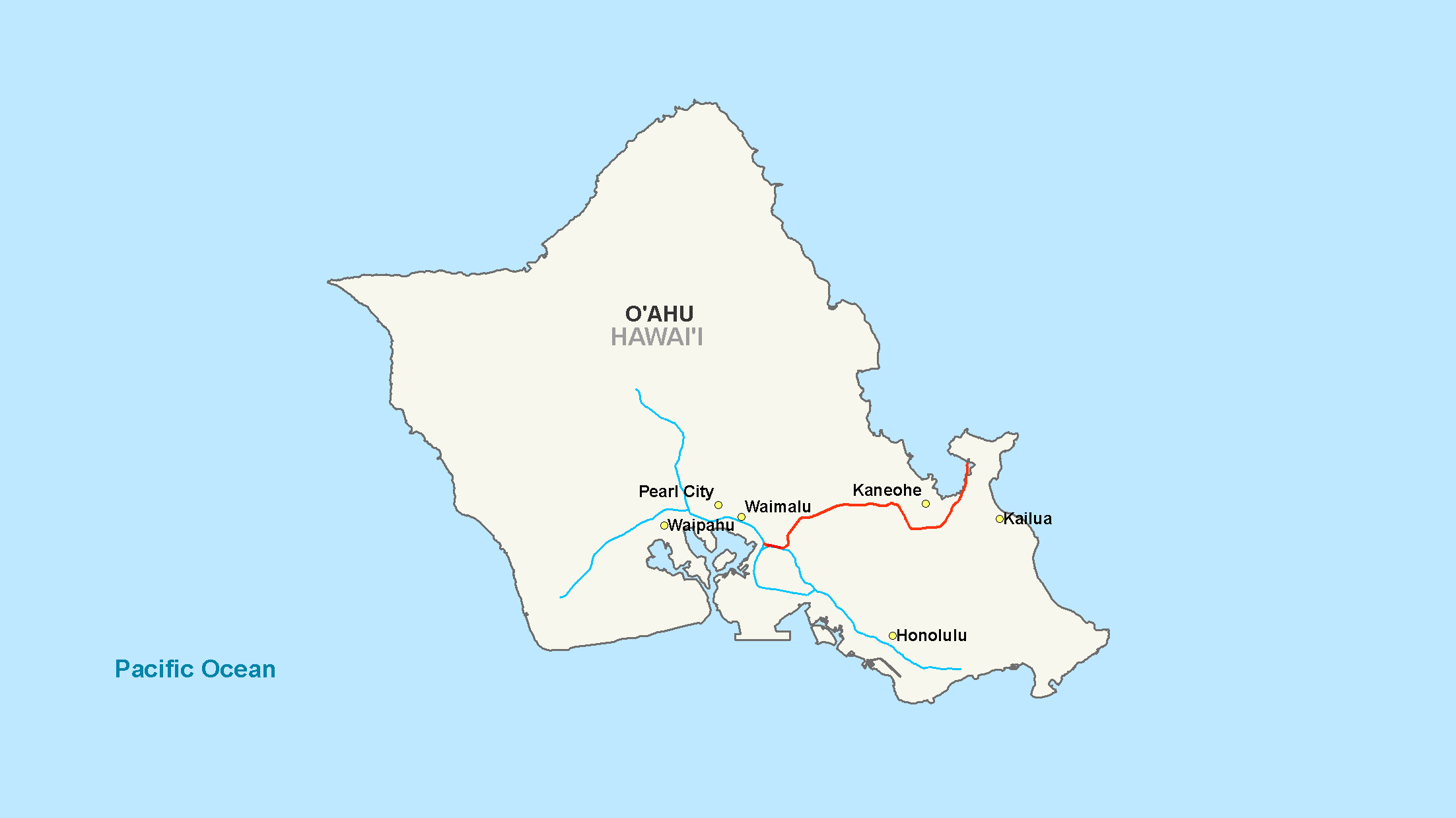 Interstate H-3 (abbreviated H-3) is an intrastate located on the island of O‘ahu in the state of Hawai‘i, . H-3 is also known as the Freeway. Despite the number, signage is that of an east-west highway. Its western terminus is at an intersection of at Hālawa near . Its eastern end is at the main gate of (MCBH). This route satisfies the national defense purpose of connecting the Marine Corps base with the U.S. Navy port at Pearl Harbor off Interstate H-1.

Orders for the freeway were granted in , followed by planning stages. Construction, amid enormous community protest, was begun in the late 1980s, although the road did not open until , . Environmental complaints and legal challenges halted construction at many points. Construction resumed during the late 1980s due to an unprecedented move by U.S. Senator , who in 1986 had the freeway exempted from most environmental laws [http://www.anthrosource.net/doi/pdf/10.1525/mua.1998.22.2.57] as a rider on a Department of Defense budget bill [http://thomas.loc.gov/cgi-bin/bdquery/?&Db=d099&querybd=@BAND(@FIELD(FLD003+@1(01369))+@FIELD(FLD008+(m)))] .

Interstate H-3 begins at the Halawa Interchange with Interstates H-1 and H-201. The freeway then runs along a viaduct through Halawa Valley for about convert|6|mi|km until it reaches the through the . Once on the eastern end of the tunnel, the highway follows a viaduct built along the side of Haiku Valley until the Kaneohe Interchange with state route 63 (Likelike Highway) which leads into the town of . The highway then continues to the Halekou Interchange with state route 83 (Kamehameha Highway), then for four more miles until it reaches the main gate of .

Since its inception in the early 1960s, the H-3 Freeway has been mired in controversy. The original route was not set to be in the current Halawa valley, but rather, the nearest major valley due east, in the "ahupua'a". The powerful Damon family hurried to create the Moanalua Gardens Foundation in 1970 to join the forces of all political and cultural groups who opposed the freeway's construction through their tract of land. The Foundation's pinnacle no-build argument was the need to remove a significant historical stone containing ancient petroglyphs, Pohaku ka Luahine, which, until this day, stands intact along the Moanalua valley trail. Success came their way as this freeway route was dropped, but the H-3 would merely be rerouted.

cultural practitioners continue to call for the highway's removal since it runs through an area of extreme cultural significance. [http://www.bishopmuseum.org/research/cultstud/h3reports.html] [http://www.haunani-kaytrask.com/gallery/H3/index.htm] Many contend that the freeway is "cursed" due to its destruction of religious sites, [http://www.hlid.org/archives.html] [http://72.14.253.104/search?q=cache:3TdRebiYDK8J:www.uhpress.hawaii.edu/journals/cp/cp131p293.pdf+Pana+O%27ahu:+Sacred+Stones,+Sacred+Land+h-3&hl=en&ct=clnk&cd=5&gl=us&client=firefox-a] and is therefore harmful even to those who traverse it. [http://starbulletin.com/97/05/09/news/story1.html] [http://starbulletin.com/97/12/04/news/story3.html] Ongoing environmental concerns include , , pollution, water and streamlife problems, and a host of other concerns; most notable among these are the ongoing decline of , and other native birds, including several probable extinctions. For example, the ("Paroreomyza maculata") [ [http://www.abcbirds.org/policy/bc00mar.pdf American Bird Conservancy, "Bird Calls", March 2000, Vol. 4, No. 1, p12, "Listing decision on Ookinaahu okinaElepaio will come by April 15th"] ] was probably made extinct by H-3, as the species, whose last known home was Halawa, has had no sightings since H-3 construction. [ [http://www.birdinghawaii.co.uk/XEndemicforestbirds2.htm Hawai'i's Endemic Forest Birds - Distribution, Status & Population Updates 2002] ] [ [http://www.bishopmuseum.org/research/cultstud/h3reports.html Archaeological Reports regarding H-3] ] [http://72.14.253.104/search?q=cache:0CMUgq5qdk0J:homepage.mac.com/ondinebak/HI_Research1_files/Seagrant_Report_2005.pdf+windward+residents+h3+controversy&hl=en&ct=clnk&cd=2&gl=us&client=firefox-a]

pollution poses a serious health threat, especially for cultural practitioners. Asbestos dust from the brake linings of traversing vehicles collects on the road in fairly large quantities. During heavy rains, this dust is carried in runoff through "spray" culverts which atomize the runoff and spray it on to the leaves of surrounding vegetation, such as bushes. This asbestos-laden sediment then dries in layers on the leaves, which become gray or light brown because of it. During strong winds, the dust is blown from the leaves and becomes airborne, posing serious health risks to those working beneath the freeway pillars, many of whom are farmers and other cultural practitioners [http://freewebs.com/nakupuna/] .

Longtime residents of Ko'olaupoko and other North Shore communities continue to object to the freeway's developmental impacts on their community. [http://www.co.honolulu.hi.us/refs/councilcomm/cl1996b.htm] Among their primary fears are urbanization on the scale of via the freeway, which has the potential to bring heavy traffic and growth into their traditionally quiet neighborhoods, as well as affecting the value of their homes in the (until recently) relatively rural communities. [http://www.westcoastroads.com/hawaii/i-h003.html]

Conversely, this road is considered an engineering wonder by its admirers. It is often compared to various cinematic landscapes in "" and other movies, and it does sometimes reduce travel time for cross-island commuters, which has allowed for increased real estate development and prices in Windward Ookinaahu (east of the Kookinaolau Mountains, although frequent traffic clogs and accidents have become a well-known feature of the road as well.Fact|date=April 2008

The H-3 is perhaps the most expensive (on a cost per unit distance basis) of any Interstate constructed. It crosses the Ko'olau mountain along a viaduct and through the 5,165 foot (1.6 km) long as well as the much smaller . For over 20 years, the completion of this highway was uncertain, as it runs through culturally and environmentally sensitive areas and some park lands were eventually used. But now, this freeway runs through a subtropical forest and over the rugged spine of windward O'ahu.

This roadway is somewhat unique in another respect. It is the only significant span of roadway on O‘ahu and perhaps in Hawai‘i where drivers regularly travel at speeds over 60 mph (100 km/h). The posted speed limit varies between 45 and 60 mph (70-100 km/h).

One anecdote relates to the elevated section passing through Ha‘ikū Valley. In this valley, the viaduct passed beneath the antenna of a radio transmission facility. It was thought that the energy field from the antenna could interfere with heart pacemakers—a potential detriment to drivers and passengers on the roadway. A giant metal cage was designed to surround the roadway through the valley. Before H-3 was opened, the Coast Guard closed their transmitting facility, obviating the need for the cage. Although the full cage was never built, buried within the roadway was the bottom of the cage. HDOT decided to remove this steel mesh (at considerable expense) prior to opening of the freeway to minimize inconvenience to the motoring public at some later time.

The entire route is in Honolulu County.