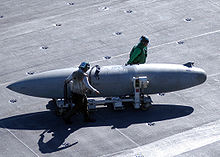 A 330 US gallons (1,200 L) Sargent Fletcher drop tank being moved across the flight deck of an Aircraft carrier

In aeronautics, a drop tank (external tank, wing tank, or belly tank) is used to describe auxiliary fuel tanks externally carried by aircraft. A drop tank is expendable and often jettisonable. External tanks are commonplace on modern military aircraft and occasionally found in civilian ones, although the latter are less likely to be discarded except in the event of emergency. 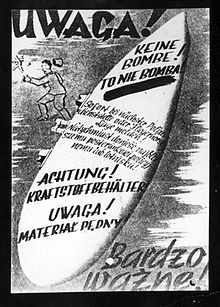 German leaflet of WWII stating in German and Polish that a drop tank is not a bomb.

The drop tank was first[citation needed] used during the Spanish Civil War to allow fighter aircraft to carry additional fuel for long-range escort flights without requiring a dramatically larger, heavier, less maneuverable fuselage. During World War II, the German Luftwaffe began using external fuel tanks with the introduction of a 300 liter (80 US gallon) light alloy model for the Ju 87R, a long range version of the Stuka dive bomber, in early 1940. The Messerschmitt Bf 109 fighter also used this type of drop tank, starting with the Bf 109E-7 variant introduced in August 1940. Fitted also to the Focke-Wulf Fw 190, 300 liter became the standard volume of subsequent drop tanks in Luftwaffe service.

The first drop tanks were designed to be discarded when empty or in the event of combat or emergency in order to reduce drag, weight, and to increase maneuverability. Modern external tanks are often intended to be retained both in combat[citation needed] and in normal long-range flight, and only dropped in an emergency.

The Allies commonly used them to allow fighters increased range and patrol time over continental Europe. The first[citation needed] RAF use of such external fuel tanks occurred in 1942, during the transit of Supermarine Spitfires to Malta.

Drop tanks were prohibited on fighter aircraft and on medium bombers by the so-called Bomber Mafia in the United States Army Air Corps prior to direct U.S. involvement in World War II. The bomber theorists assumed that bombers would be self-defending; they saw long-range fighters as "a myth",[1] as they could be easily forced to drop the tanks by minor harassment just at the beginning of the raid.[1] Long-range medium bombers were viewed as direct competition to their goal of vast air fleets of heavy bombers.[2] Starting in 1941, airmen such as Benjamin S. Kelsey and Oliver P. Echols worked quietly to get drop tank technology added to American fighters such as the Lockheed P-38 Lightning. It was only with drop tanks supplying at least 450 US gallons (1,700 l; 370 imp gal) of extra fuel per fighter that the P-38 could have carried out Operation Vengeance, the shootdown of Admiral Isoroku Yamamoto.[3] Even after such experience showed the necessity for drop tanks, inflexible thinkers such as General Ira C. Eaker had to be transferred out of commanding positions so that drop tanks and range extension plans could be widely implemented in 1944 for American escort fighters.[4] External drop tanks also turned the Republic P-47 Thunderbolt from a short-range interceptor into long-range escort and air superiority fighter, enabling it to accompany bombers all the way from British Isles to Germany, and back.

The primary disadvantage with drop tanks is that they impose a drag penalty on the aircraft carrying them. External fuel tanks will also increase the moment of inertia, thereby reducing roll rates for air combat maneuvers. A rule of thumb is that only about half the capacity of a streamlined drop tank actually goes towards increasing the aircraft's overall range, the rest going to overcome the added drag and weight of the tank itself. Drag in this sense varies with the square of the aircraft's speed. The use of drop tanks also reduces the number of external hardpoints available for weapons, and increases the aircraft's radar signature, both problematic for modern tactical aircraft.

Some modern combat aircraft use conformal fuel tanks (CFTs) instead of or in addition to conventional external fuel tanks. CFTs produce less drag and do not take up external hardpoints, however as a result some versions can only be removed on the ground.

The Matra JL-100 is a special hybrid drop tank and rocket pack; it combines a rocket launcher in front (with 19× SNEB 68 mm (2.7 in) rockets) and 250 litres (66 USgal) of fuel behind into one single aerodynamically-shaped pod for mounting on combat aircraft such as the Dassault Mirage IIIs and English Electric Lightnings.

After World War II, hot rodders raced the dry lakes of California to set new land speed records. War surplus drop tanks were plentiful and aerodynamically neutral, and it didn't take long to make one into a car, dubbed a lakester. According to GM historians,[5] Bill Burke of the So-Cal Speed Shop first attempted to convert a 168-gallon P51 Mustang belly tank, before switching to the larger 305-gallon P38 Lightning tank. Even now, lakesters compete at the Bonneville Salt Flats.