Succinate dehydrogenase or succinate-coenzyme Q reductase (SQR) or Complex II is an enzyme complex, bound to the inner mitochondrial membrane of mammalian mitochondria and many bacterial cells. It is the only enzyme that participates in both the citric acid cycle and the electron transport chain.[1]

In step 8 of the citric acid cycle, SQR catalyzes the oxidation of succinate to fumarate with the reduction of ubiquinone to ubiquinol. This occurs in the inner mitochondrial membrane by coupling the two reactions together. 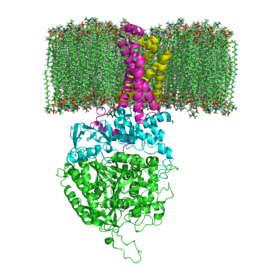 Image 3: The structure of SQR in a phospholipid membrane. SdhA, SdhB, SdhC and SdhD. 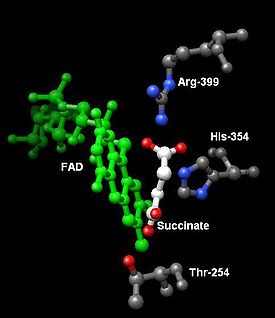 Image 5: The oxidation of Succinate.

Subunits: Mammalian, mitochondrial, and many bacterial monomer SQRs are composed of four subunits: two hydrophilic and two hydrophobic. The first two subunits, a flavoprotein (SdhA) and an iron-sulfur protein (SdhB), are hydrophilic. SdhA contains a covalently attached flavin adenine dinucleotide (FAD) cofactor and the succinate binding site and SdhB contains three iron-sulfur clusters: [2Fe-2S], [4Fe-4S], and [3Fe-4S]. The second two subunits are hydrophobic membrane anchor subunits, SdhC and SdhD. Human mitochondria consists of two distinct isoforms of SdhA (Fp subunits type I and type II), these isoforms are also found in Ascaris suum and Caenorhabditis elegans.[3] The subunits form a membrane-bound cytochrome b with six transmembrane helices containing one heme b group and a ubiquinone-binding site, which can be seen in Image 4. Two phospholipid molecules, one cardiolipin and one phosphatidylethanolamine, are also found in the SdhC and SdhD subunits (not shown in the image). They serve to occupy the hydrophobic space below the heme b. These subunits are displayed in image 3. SdhA is green, SdhB is teal, SdhC is fuchsia, and SdhD is yellow. Around SdhC and SdhD is a phospholipid membrane with the intermembrane space at the top of the image.[4]

Ubiquinone Binding Site: Ubiquinone’s binding site, image 4, is located in a gap composed of SdhB, SdhC, and SdhD. Ubiquinone is stabilized by the side chains of His207 of subunit B, Ser27 and Arg31 of subunit C, and Tyr83 of subunit D. The quinone ring is surrounded by Ile28 of subunit C and Pro160 of subunit B. These residues, along with Il209, Trp163, and Trp164 of subunit B, and Ser27 (C atom) of subunit C, form the hydrophobic environment of the quinone-binding pocket (not shown in the image).[5]

Succinate Binding Site: SdhA provides the binding site for the oxidation of succinate. The side chains Thr254, His354, and Arg399 of subunit A stabilize the molecule while FAD oxidizes and carries the electrons to the first of the iron-sulfur clusters, [2Fe-2S].[6] This can be seen in image 5.

Redox Centers: The succinate-binding site and ubiquinone-binding site are connected by a chain of redox centers including FAD and the iron-sulfur clusters. This chain extends over 40 Å through the enzyme monomer. All edge-to-edge distances between the centers are less than the suggested 14 Å limit for physiological electron transfer.[4] This electron transfer is demonstrated in image 8.

Succinate Oxidation: Little is known about the exact succinate oxidation mechanism. However, the crystal structure shows that FAD, Glu255, Arg286, and His242 of subunit A (not shown) are good candidates for the initial deprotonation step. Thereafter, there are two possible elimination mechanisms: E2 or E1cb. In the E2 elimination, the mechanism is concerted. The basic residue or cofactor deprotonates the alpha carbon, and FAD accepts the hydride from the beta carbon, oxidizing the bound succinate to fumarate--refer to image 6. In E1cb, an enolate intermediate is formed, shown in image 7, before FAD accepts the hydride. Further research is required to determine which elimination mechanism succinate undergoes in Succinate Dehydrogenase. Oxidized fumarate, now loosely bound to the active site, is free to exit the protein.

Electron Tunneling: After the electrons are derived from succinate oxidation via FAD, they tunnel along the [Fe-S] relay until they reach the [3Fe-4S] cluster. These electrons are subsequently transferred to an awaiting ubiquinone molecule within the active site. The Iron-Sulfur electron tunneling system is shown in image 9.

Ubiquinone Reduction: The O1 carbonyl oxygen of ubiquinone is oriented at the active site (image 4) by hydrogen bond interactions with Tyr83 of subunit D. The presence of electrons in the [3Fe-4S] iron sulphur cluster induces the movement of ubiquinone into a second orientation. This facilitates a second hydrogen bond interaction between the O4 carbonyl group of ubiquinone and Ser27 of subunit C. Following the first single electron reduction step, a semiquinone radical species is formed. The second electron arrives from the [3Fe-4S] cluster to provide full reduction of the ubiquinone to ubiquinol. This mechanism of the ubiquinone reduction is shown in image 8. 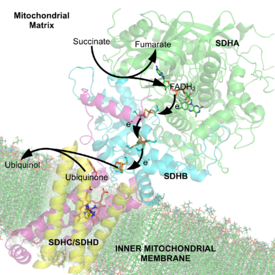 Heme Functionality: Although the functionality of the heme in succinate dehydrogenase is still being researched, some studies have asserted that the first electron delivered to ubiquinone via [3Fe-4S] may tunnel back and forth between the heme and the ubiquinone intermediate. In this way, the heme cofactor acts as an electron sink. Its role is to prevent the interaction of the intermediate with molecular oxygen to produce reactive oxygen species (ROS). The heme group, relative to ubiquinone, is shown in image 4.

It has also been proposed that a gating mechanism may be in place to prevent the electrons from tunneling directly to the heme from the [3Fe-4S] cluster. A potential candidate is residue His207, which lies directly between the cluster and the heme. His207 of subunit B is in direct proximity to the [3Fe-4S] cluster, the bound ubiquinone, and the heme; and could modulate electron flow between these redox centers.[7]

Proton Transfer: To fully reduce the quinone in SQR, two electrons as well as two protons are needed. It has been argued that a water molecule (HOH39) arrives at the active site and is coordinated by His207 of subunit B, Arg31 of subunit C, and Asp82 of subunit D. The semiquinone species is protonated by protons delivered from HOH39, completing the ubiquinone reduction to ubiquinol. His207 and Asp82 most likely facilitate this process. Other studies claim that Tyr83 of subunit D is coordinated to a nearby histidine as well as the O1 carbonyl oxygen of ubiquinone. The histidine residue decreases the pKa of tyrosine, making it more suitable to donate its proton to the reduced ubiquinone intermediate.

There are two distinct classes of inhibitors of complex II. Those that bind in the succinate pocket and those that bind in the ubiquinone pocket. Ubiquinone type inhibitors include carboxin and thenoyltrifluoroacetone. Succinate-analogue inhibitors include the synthetic compound malonate as well as the TCA cycle intermediates, malate and oxaloacetate. Indeed, oxaloacetate is one of the most potent inhibitors of Complex II. Why a common TCA cycle intermediate would inhibit Complex II is not entirely understood, though it may exert a protective role in minimizing reverse-electron transfer mediated production of superoxide by Complex I.[8]

The fundamental role of succinate-coenzyme Q reductase in the electron transfer chain of mitochondria makes it vital in most multicellular organisms, removal of this enzyme from the genome has also been shown to be lethal at the embryonic stage in mice.

Mammilian succinate dehydrogenase functions not only in mitochondrial energy generation, but also has a role in oxygen sensing and tumor suppression; and, therefore, is the object of ongoing research.