Space Moose was a Canadian underground comic strip that appeared in the University of Alberta's student newspaper, The Gateway, between October 3, 1989 and 1999.[1] Almost all of the strips were penned by Adam Thrasher, a student at the university.[2] For career-related reasons, many archives refer to the author by his post-production pen name Mustafa Al-Habib.[3] Macleans Canada said that Space Moose "was deliberately provocative."[4] Ellen Schoek, the author of I Was There: A Century of Alumni Stories about the University of Alberta, 1906-2006, said that Space Moose "left no subject unscathed, from fraternities to Christianity and obesity, from sexual proclivities to racism."[2]

The strip follows the adventures of Space Moose, an anthropomorphic, nihilistic moose with asymmetrical eyes and a Star Trek uniform, as he violates every behavioral norm and societal taboo he can find. His roommates Marlo Smefner, Billy the Bionic Badger, and Bald Dwarf are often the accomplices or victims of his actions. Macleans Canada said that Space Moose was "probably the most famous comic strip character in Canadian university history."[4]

A book collection, Triumph of the Whim, was published in the northern hemisphere fall of 1997. It consists of 94 pages of selected existing Space Moose cartoons and 6 pages of previously unpublished Space Moose strips.[5] Most strips were available on the Space Moose web site. 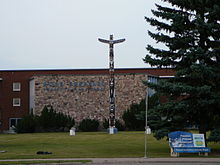 Thrasher said that he began drawing Space Moose while enrolled at Ross Sheppard High School in Edmonton in order to make a friend laugh. The first Space Moose comic premiered in the October 3, 1989 edition of The Gateway. In 1991 Thrasher left the University of Alberta and worked for Northwestern Utilities in Edmonton; during the four months he worked with the company, he did not produce any Space Moose comics, and the school newspaper replaced Space Moose's slot with Colby Christ, a comic about Colby Cosh, a friend of Thrasher. When Thrasher returned to the university, Colby Christ was replaced by Space Moose, which had resumed. Thrasher and Husereau drew "Colby Christ meets Space Moose," a strip that was a segue between the series.[6]

Macleans Canada stated that the most controversial strip was "Clobberin' Time," which satirized the Take Back the Night march, an annual event held on Jasper Avenue to protest violence perpetrated by men against women.[4][2] In that strip Space Moose prepares to attack demonstrators,[4] and opens fire on women in the rally while using a machine gun,[7] hitting his targets.[2] A large masculine-appearing woman captures Space Moose,[7] and in the following strip he is incarcerated in a "Womyn’s Studies re-education camp." There he is forced to constantly watch reruns of Dr. Quinn, Medicine Woman.[4]

In October 1997, The Gateway refused to publish the strip "Clobberin' Time." The strip was nevertheless available on the cartoonist's web site, which was hosted on university servers;[7] its presence ignited a controversy across many campuses.[4] Thrasher was sent to a university disciplinary hearing;[4] he was accused of discrimination under the university's code of student behavior,[citation needed] After he was disciplined, he appealed, resulting in the charge being overturned. The front page of the November 5, 1998 The Gateway stated "Space Moose Beats the Rap."[2] As the controversy occurred, Thrasher planned to move the comic off of university servers and onto a private server. The controversy garnered media attention throughout Canada. Thrasher said "I'm an underground cartoonist -- I've always tried to keep a low profile."[8]

In 1997, Space Moose ran for Students' Union President and finished a close third with 1,400 votes (only 11 votes behind the second place candidate, Hoops Harrison). This led to changes being made in Students' Union rules that would prevent any future "joke" candidate from actually winning an election. Due to the increasing popularity of the cartoon, people took away Space Moose's campaign posters as collector's items.[4]

Thrasher was born on September 9, 1971 in London, Ontario. He and his family moved to Edmonton when he was 10 years old.[6] Thrasher received his bachelor's degree in mechanical engineering at the University of Alberta in 1994.[6][9] Thrasher was scheduled to receive his doctorate in 2000. Cosh said "His need to complete his doctoral thesis explains the shocking paucity of strips in 1999."[6] He received his PHD in medical sciences in 2002.[9] As of 2011 Thrasher is now a professor at the University of Houston.[4][9]

Space Moose was originally created for the entertainment of Paul Diedrich, a friend of Thrasher. Diedrich coined the name "Space Moose." Thrasher said "I drew this thing with all the stereotypes of a goofy character--lopsided googly eyes, buck teeth that hang out, and antlers." At first, Space Moose was a collaboration between Thrasher, Thrasher's friend Jason Kapalka, and Donald R. "Don" Husereau, a pharmacy student. After drawing one Space Moose cartoon, Husereau left the strip's production but continued to be an advisor. For the first year, Thrasher collaborated with friend Jason Kapalka. After the first year, Thrasher did the strip alone.[6]

Originally Thrasher used materials from his mother's office to create the comics. As the comic progressed, he began using a black Sanford uniball to ink. The creator pencilled lightly with a very hard lead, such as a 5H. The paper used was ordinary 20-pound (9.1 kg) sets of bleached paper. In addition Thrasher used a portable drawing board with a T-square.[6]

Thrasher said "My cartoons, more often than not, challenge the reader to think about things that are horrible, reprehensible and irredeemable. If I have achieved that, there seems to be only two possible reactions: anger or laughter. I aim for the latter and put up with the former."[6]

Thrasher said that his influences include Scott Adams, author of Dilbert; Matt Groening, author of The Simpsons; and Gary Larson, author of The Far Side.[6] Colby Cosh said "[h]e's glad they pushed the envelope to allow biting cartoonists such as him to thrive."[6] Thrasher said "When I grew up, newspaper comics were sickly sweet."[6] Thrasher believed that Family Circle, Marmaduke, and Ziggy were "offensively lame."[6]

The first year of Space Moose had obscure references to many Edmonton-based bulletin board system participants. Cosh said "That's why those strips mostly make no sense. They're in-jokes that got into the campus paper for some reason. Quality control was a real problem then, as now."[6] Cosh added "Adam would prefer that you just ignore the 1989-90 episodes of Space Moose. With respect to Jason Kapalka's gag writing, the real jumping-off point for "Space Moose" is the ingenious "Calvin and Slobbes," the first strip of 1990-91."[6]

Originally Space Moose had a head of hair. In 1993 Thrasher dropped the hair, because he felt the character looked better with a bald head. Thrasher added "Sometimes, the hair is useful--for example, in the "Summertime tips" strip, where he slicked it back to look suave, or in "Extreme Space Moose," where the mane looks like fire and adds intensity to the drawing."[6]

The word "bee" often occurs in the strip, and sometimes a developmentally disabled man appears. This is based on Thrasher's experience while riding on a school bus with a boy with Down's Syndrome. The boy often sung softly; Thrasher later learned that the boy was trying to say the word "bee" using different pitches and tones. After the discovery, Thrasher decided to introduce the word in his vocabulary, with different tones leading to different meanings.[6]