Tilapia
This article is about the fish that fall under the term tilapia in common usage. For species belonging to the genus Tilapia, see Tilapia (genus).

/tɨˈlɑːpiə/ ti-lah-pee-ə), is the common name for nearly a hundred species of cichlid fish from the tilapiine cichlid tribe. Tilapia inhabit a variety of fresh water habitats, including shallow streams, ponds, rivers and lakes. Historically, they have been of major importance in artisan fishing in Africa and the Levant, and are of increasing importance in aquaculture. Tilapia can become problematic invasive species in new warm-water habitats, whether deliberately or accidentally introduced, but generally not in temperate climates due to their inability to survive in cool waters, generally below 60 °F (16 °C). (See tilapia as exotic species).

The common name tilapia is based on the name of the cichlid genus Tilapia, which is itself a latinization of thiape, the Tswana word for "fish".[1] Scottish zoologist Andrew Smith named the genus in 1840.[2] 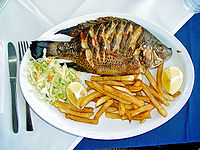 Tilapia go by many names. The name "St. Peter's fish" comes from the story in the Gospel of Matthew about the apostle Peter catching a fish that carried a coin in its mouth, though the passage does not name the fish.[3] While the name also applies to Zeus faber, a marine fish not found in the area, a few tilapia species (Sarotherodon galilaeus galilaeus and others) are found in the Sea of Galilee, where the author of the Gospel of Matthew accounts the event took place. These species have been the target of small-scale artisanal fisheries in the area for thousands of years.[4][5] In some Asian countries including the Philippines, large tilapia go by pla-pla while the smaller types are just tilapia.[6]

Tilapia is the fifth most important fish in fish farming, with production reaching 1,505,804 metric tons in 2000.[7] Because of their large size, rapid growth, and palatability, tilapiine cichlids are the focus of major farming efforts, specifically various species of Oreochromis, Sarotherodon, and Tilapia, collectively known colloquially as tilapia. Like other large fish, they are a good source of protein and popular among artisanal and commercial fisheries. Most such fisheries were originally found in Africa, but outdoor fish farms in tropical countries, such as Papua New Guinea, the Philippines, and Indonesia, are underway in freshwater lakes.[8] In temperate zone localities, tilapiine farming operations require energy to warm the water to tropical temperatures. One method uses waste heat from factories and power stations.[9]

China is the largest tilapia producer in the world, followed by Egypt.[10]

Commercially grown tilapia are almost exclusively male. Cultivators use hormones, such as testosterone, to reverse the sex of newly spawned females. Because tilapia are prolific breeders, the presence of female tilapia results in rapidly increasing populations of small fish, rather than a stable population of harvest-size animals.[11]

Other methods of tilapia population control are polyculture, with predators farmed alongside tilapia or hybridization with other species.[12]

Whole tilapia fish can be processed[13] into skinless, boneless (PBO) fillets: the yield is from 30 percent to 37 percent, depending on fillet size and final trim.[14] The use of tilapia in the commercial food industry has led to the virtual extinction of genetically pure bloodlines. Most wild tilapia today are hybrids of several species.

Tilapia have very low levels of mercury,[15] as they are fast-growing and short-lived, with a primarily herbivorous diet, so do not accumulate mercury found in prey.[16] Tilapia is a low saturated fat, low calorie, low carbohydrate and low sodium protein source. It is a source of phosphorus, niacin, selenium, vitamin B12 and potassium.

Farm-raised tilapia (the least expensive and most popular) has a high fat content, though low in saturated fats. According to research published in July 2008, the nutritional value of farm-raised tilapia may be compromised by the amount of corn included in the feed. Short-chain omega-6s in corn accumulate in the fish. "Ratios of long-chain omega-6 to long-chain omega-3, AA to EPA respectively, in tilapia averaged about 11:1, compared to much less than 1:1 (indicating more EPA than AA) in both salmon and trout." The ratio is worse than is found in beef. Widespread publicity encouraging people to eat more fish has seen tilapia being purchased by those with lower incomes who are trying to eat a well-balanced diet. The lower amounts of omega-3 and the higher ratios of omega-6 fats in US-farmed tilapia raise questions of the health benefits of consuming this fish.[17]

Adequate diets for salmon and other carnivorous fish can alternatively be formulated from protein sources such as soy, although soy-based diets may also change in the balance between omega-6 and omega-3 fatty acids.[18]

Tilapia are unable to survive in temperate climates because they require warm water. The pure strain of the blue tilapia, Oreochromis aureus, has the greatest cold tolerance and dies at 45 °F (7 °C) while all other species of tilapia will die at a range of 52 to 62 °F (11 to 17 °C). As a result, they cannot invade temperate habitats and disrupt native ecologies in temperate zones; however, they have spread widely beyond their points of introduction in many fresh and brackish tropical and subtropical habitats, often disrupting native species significantly.[19] Because of this, tilapia are on the IUCN's 100 of the World's Worst Alien Invasive Species list.[20] In the United States, tilapia are found in much of Florida, Texas and a few other isolated areas, such as power plant discharge zones. Many state fish and wildlife agencies in the United States, Australia, South Africa and elsewhere consider them an invasive species.[21]

Uses other than supplying food

Tilapia serve as a natural, biological control for most aquatic plant problems. Tilapia consume floating aquatic plants, such as duckweed watermeal (Lemna sp.), most "undesirable" submerged plants, and most forms of algae.[22] In the United States and countries such as Thailand, they are becoming the plant control method of choice, reducing or eliminating the use of toxic chemicals and heavy metal-based algaecides.

Tilapia rarely compete with other "pond" fish for food. Instead, because they consume plants and nutrients unused by other fish species and substantially reduce oxygen-depleting detritus, adding tilapia often increases the population, size and health of other fish.

Arizona stocks tilapia in the canals that serve as the drinking water sources for the cities of Phoenix, Mesa and others. The fish help purify the water by consuming vegetation and detritus, greatly reducing purification costs.

Arkansas stocks many public ponds and lakes to help with vegetation control, favoring tilapia as a robust forage species and for anglers.

Larger tilapia species are generally viewed as poor community aquarium fish because they eat plants, dig up the bottom, and fight with other fish. However, they are often raised in aquariums as a food source due to their rapid growth and tolerance for high stocking densities and poor water quality. The smaller West African species, such as Tilapia joka and those species from the crater lakes of Cameroon, are more popular. In specialized cichlid aquaria, tilapia can be mixed successfully with nonterritorial cichlids, armored catfish, tinfoil barbs, garpike and other robust and dangerous fish. Some species, including Tilapia buttikoferi, Tilapia rendalli,Tilapia mariae, Tilapia joka and the brackish-water Sarotherodon melanotheron melanotheron, have attractive patterns and are quite decorative.[24]