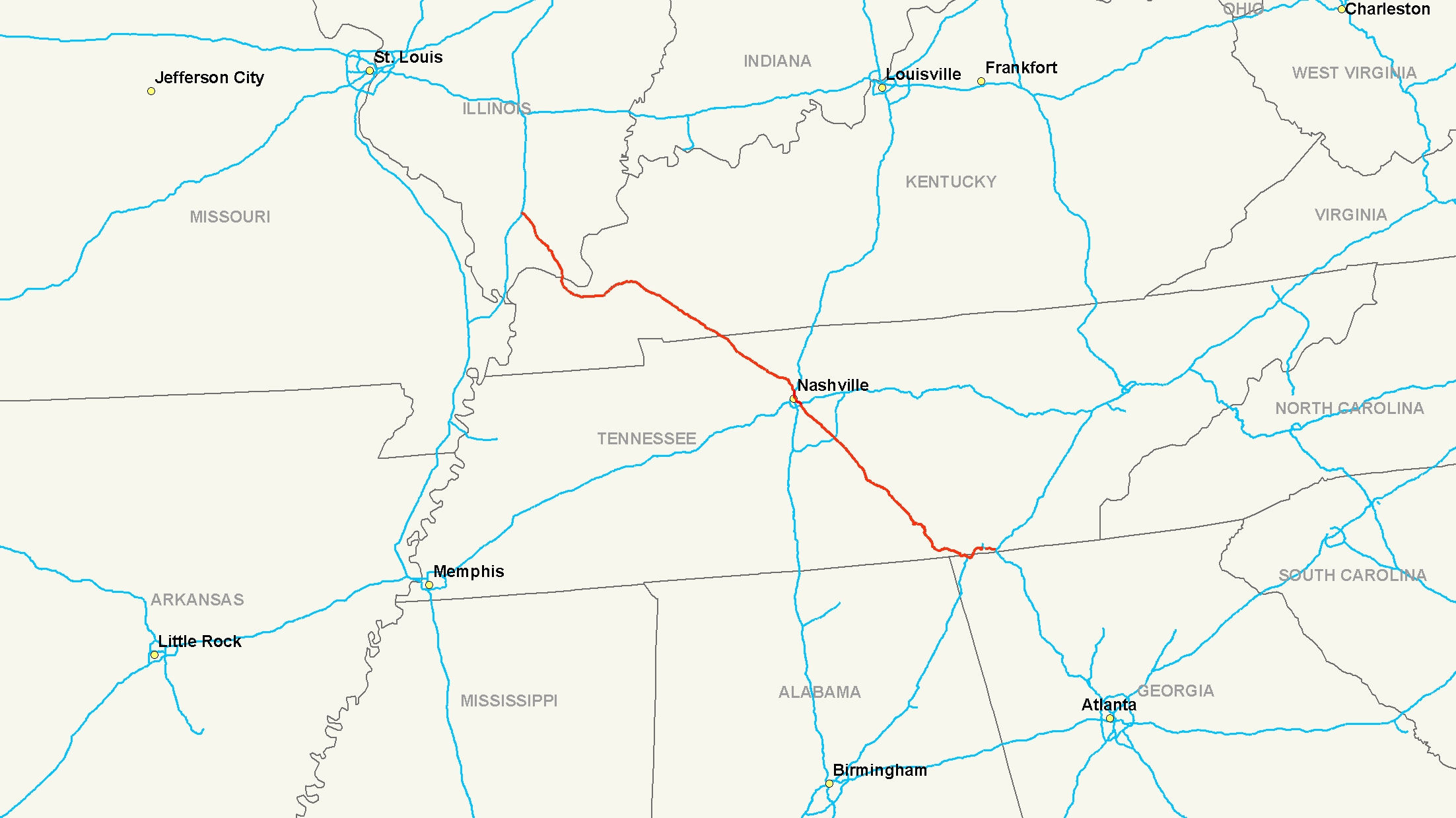 I-24 makes up the majority of a high-traffic corridor between , and . This corridor utilizes and west of I-24, and east of I-24.

In the state of , Interstate 24 is a remote, four-lane freeway that travels through hilly rural southern Illinois and the . There are only five mainline exits; of those five, four have services. Interstate 24 crosses into Kentucky via the from to .

In the state of , Interstate 24 runs from Paducah to the Tennessee border just northwest of Clarksville. Along its route are which forms and which forms , ("LBL"; under the management of the ), and .

Future extensions of and possibly are proposed to run concurrent with Interstate 24 in the Eddyville to Calvert City corridor.Fact|date=February 2007

In the state of , Interstate 24 runs from Clarksville to Chattanooga by way of Nashville. Just west of Chattanooga, I-24 drops into Georgia for 4 miles (6 km).

One of the most notoriously hazardous stretches of Interstate highway in the United States is approximately 40 miles (64 km) west of Chattanooga on I-24 in Monteagle, where the highway goes over the . Compared to grades elsewhere, Monteagle's 4 to 6% grade does not come close to the steepest highway roads (the Siskiyou Pass of has some the steepest grades in the nation), [citeweb|title=Interstate 5: Interesting Facts|url=http://www.oregon.gov/ODOT/COMM/interstate50_I5.shtml |publisher= |accessdate=2007-09-26] but the is protracted over a distance of several miles.

is an occasional (currently unsigned) designation of a portion of the US 27 freeway which runs as a spur into downtown and beyond. [, [http://www.tdot.state.tn.us/roadprojects/2007/ Fiscal Years 2008-2010 Transportation Improvement Program] , , ] Also in Chattanooga is the "Ridge Cut", a 1/4 mile section of , between the 4th Avenue exit and the Germantown/Belvoir exit. Accidents and severe congestion are common here.

In the state of Georgia, Interstate 24 runs for 4 miles (6 km), running along the southern flank of and intersecting with before turning back north to the and around the northern flank of . The exits and mileposts remain numbered according to Tennessee's mileposts.

The highway is expected to cross in and in .Fact|date=February 2007