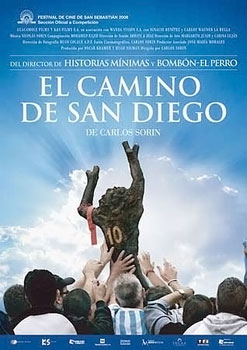 The picture tells the story of an Argentine obsessed with "fútbol" athlete Diego Maradona.

Tati Benitez (Ignacio Benitez), is a young man who lives in the , and an Argentine who's been laid off at work. He now makes his living by collecting wood for an artisan named Silva (Miguel Gonzales Colman). He's married to his pregnant wife (Paola Rotela).

Typical of Argentines, Tati is a fanatic. Tati, is quite quirky and, like many Argentines, is obsessed with the Argentine soccer player , who is legendary in Argentina because of his prowess in the soccer World Cup. He wears a soccer uniform with Maradona's number 10 on it and has a very large 10 tattooed on his back. He even owns two parrots who scream "Maradona" from time to time. His friends joke that Tati is not married to his wife, but to Maradona. In fact, Tati knows every possible statistic of Maradona's career, as well as Maradona's personal information.

One day Tati's hears from friends that Maradona is suffering from heart problems, so he decides to go on a quest.

His mission is to deliver an unusual piece of wood to Maradona at the Swiss-Argentine Hospital in where he is recuperating. The piece of wood resembles Maradona.

Tati travels by , by , and even by , to let Marodona feel the and love of his loyal .

On his way he runs into many adventures.

Filming locations
The picture was filmed in: Misiones, .

The film opened in Argentina on , .

The picture was presented at the , .

The movie has been screened at a few film festivals, including: the Spanish and Latin American Film Festival, ; and others.

Álvaro Sanjurjo Toucon, in a scholarly analysis of the film and Carlos Sorín's other works for , had positive things to say of the picture. He summarized: "Sorín skillfully combines documentary footage of an unreflective, probably self-destructive, Maradona with the scenes involving the young man...sport hasn't been a major theme in Argentine movies, even though it is a significant part of the national identity. Sorín's films highlights the value of his work. In the same way in which we can watch a match from different perspectives depending on where we are seated, "The Road to San Diego" can be interpreted from various points of view. One has just to choose one of the many perspectives offered by the great filmmaker who is Carlos Sorin." [ [http://www.fipresci.org/festivals/archive/2006/havana/sandiego_asanjurjo.htm Sanjurjo Toucon, Alvaro] . "", film analysis, "A Chronicle of Men and Heroes," 2006.]