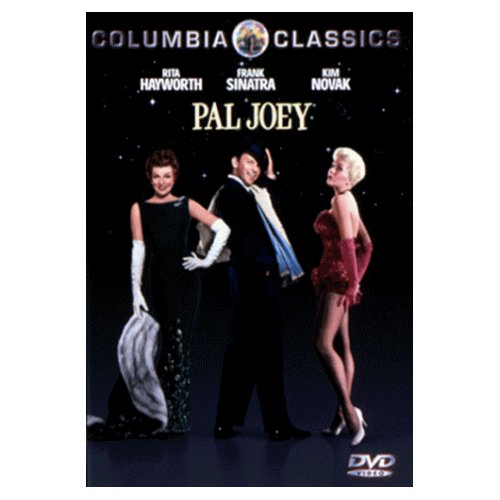 Pal Joey is a 1957 film, loosely adapted from the musical play of the same name; it stars (top billed), , and . The director is and the choreographer is Hermes Pan. Considered by many critics as the definitive vehicle, Sinatra won the for his role as Joey Evans.

"Pal Joey" is also one of Frank Sinatra's few post-"" movies in which he did not receive top-billing, Sinatra deciding himself to allow this honor stating, with regards to being billed "between" Hayworth and Novak, "That's a sandwich I don't mind being stuck in the middle of."

The setting is ; Joey Evans is a second-rate singer, a heel known for his ways, but charming and funny. When Joey meets Linda English, a naive chorus girl, he has stirrings of real feelings. However, that does not stop him from romancing a wealthy, willful, and lonely widow Vera Simpson, in order to convince her to finance his dream, "Chez Joey", a night club of his own. Soon Joey is involved with Vera, each using the other for their own somewhat selfish purposes. But Joey's feelings for Linda are growing. Ultimately, Vera jealously demands that Joey fire Linda. When Joey refuses ("Nobody owns Joey but Joey"), Vera closes down Chez Joey. Linda visits Vera and agrees to quit in an attempt to keep the club open. Vera then agrees to open the club, and even offers to marry Joey, but Joey rejects Vera. As Joey is leaving, Linda runs after him, offering to go wherever he is headed. After half-hearted refusals, Joey gives in and they walk away together, united.

"Notes:"The happy ending of the film contrasts with that of the stage musical, where Joey is left alone at the end.

The transformation of Joey into a "nice guy" departed from the stage musical, where Joey's character was notable for being the anti-hero. The film varies from the stage musical in several other key points: the setting was changed from Chicago to San Francisco, and the stage Joey was a dancer. In the film, Vera Simpson is a widow and a former stripper and thus sings the burlesque take-off song "Zip". The lyrics to Vera's song "Bewitched, Bothered and Bewildered" were changed. Linda became a naive chorus girl instead of a naive stenographer. The plot of the film drops a blackmail attempt and two roles prominent on stage were changed: Melba (a reporter) was dropped and Gladys became a minor character.

Of the original 14 Rodgers and Hart songs, eight remained, but with two as instrumental background, and four songs were added from other shows. ["Hollywood Musicals Year By Year", Green, Stanley, Revised and Updated, Schmidt, Elaine, 2nd Edition, 1999, ISBN 0634007653, p. 214.]

Opening to positive reviews on October 25th 1957, Pal Joey was an instant success with critics and the general public alike. The Variety review summarized: "Pal Joey is a strong, funny entertainment. Dorothy Kingsley's screenplay, from John O'Hara's book, is skillful rewriting, with colorful characters and solid story built around the Richard Rodgers and Lorenz Hart songs. Total of 14 tunes are intertwined with the plot, 10 of them being reprised from the original. Others by the same team of cleffers are 'I Didn't Know What Time It Was', 'The Lady Is a Tramp', 'There's a Small Hotel' and 'Funny Valentine'." [ [http://www.variety.com/review/VE1117793836.html?categoryid=31&cs=1&p=0] "Variety" review, January 1, 1957]

commented, "This is largely Mr. Sinatra's show...he projects a distinctly bouncy likeable personality into an unusual role. And his rendition of the top tunes, notably 'The Lady Is a Tramp' and 'Small Hotel,' gives added lustre to these indestructible standards." [Weiler, A.H. [http://movies.nytimes.com/movie/review?res=990CE0DD1030E03ABC4051DFB667838C649EDE&scp=3&sq=%22Pal%20Joey%22&st=cse "Pal Joey Back on Broadway; Sinatra Is Starred in Film of Hit Show",] "New York Times", October 28, 1957]

With box office rentals of $4.7 million, Pal Joey was ranked by Variety as one of the ten highest earning films of 1957.