Line moiré is one type of moiré pattern; a pattern that appears when superposing two transparent layers containing correlated opaque patterns. Line moiré is the case when the superposed patterns comprise straight or curved lines. When moving the layer patterns, the moiré patterns transform or move at a faster speed. This effect is called optical moiré speedup. 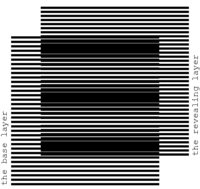 Simple moiré patterns can be observed when superposing two transparent layers comprising periodically repeating opaque parallel lines as shown in Figure 1. The lines of one layer are parallel to the lines of the second layer.

The superposition image of Figure 1 outlines periodically repeating dark parallel bands, called moiré lines. Spacing between the moiré lines is much larger than the periods of lines in the two layers.

Figure 3. Computing the period of moiré lines in a superposition image as a function of the periods of lines of the revealing and base layers

Figure 3 shows a detailed diagram of the superposition image between two adjacent zones with overlapping lines of the revealing and base layers (i.e., between two light bands)[1].

For the case when the revealing layer period is longer than the base layer period, the distance between moiré bands is the absolute value computed by the formula. The superposition of two layers comprising parallel lines forms an optical image comprising parallel moiré lines with a magnified period. According to the formula for computing pm, the closer the periods of the two layers, the stronger the magnification factor is.

Speedup of movements with moiré

By replacing pm with its formula, we have[3]

Superposition of layers with inclined lines

Here we present patterns with inclined lines. When we are interested in optical speedup we can represent the case of inclined patterns such that the formulas for computing moiré periods and optical speedups remain valid in their current simplest form. For this purpose, the values of periods pr, pb, and pm correspond to the distances between the lines along the axis of movements (the vertical axis in the animated example of Figure 4). When the layer lines are perpendicular to the movement axis, the periods (p) are equal to the distances (denoted as T) between the lines (as in Figure 4). If the lines are inclined, the periods (p) along the axis of the movement are not equal to the distances (T) between the lines. 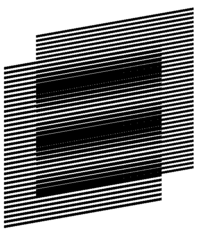 The superposition of two layers with identically inclined lines forms moiré lines inclined at the same angle. Figure 5 is obtained from Figure 1 with a vertical shearing. In Figure 5 the layer lines and the moiré lines are inclined by 10 degrees. Since the inclination is not a rotation, during the inclination the distance (p) between the layer lines along the vertical axis is conserved, but the true distance (T) between the lines (along an axis perpendicular to these lines) is changed. The difference between the vertical periods pb, pr, and the distances Tb, Tr is shown in the diagram of Figure 8.

Figure 6. identical curves in all pattern

The inclination degree of layer lines may change along the horizontal axis forming curves. The superposition of two layers with identical inclination pattern forms moiré curves with the same inclination pattern. In Figure 6 the inclination degree of layer lines gradually changes according the following sequence of degrees (+30, –30, +30, –30, +30). Layer periods pb and pr represent the distances between the curves along the vertical axis. The presented formulas for computing the period pm (the vertical distance between the moiré curves) and the optical speedup (along the vertical axis) are valid for Figure 6.

From Figure 8 we deduce the following two equations:

From these equations we deduce the equation for computing the inclination of moiré lines as a function of the inclinations of the base layer and the revealing layer lines:

The true pattern periods Tb, Tr, and Tm (along the axes perpendicular to pattern lines) are computed as follows (see Figure 8):

In the particular case when Tb=Tr=T, the formula for the period Tm is reduced into well known formula:

And the formula for computing αm is reduced to:

For any given base layer line inclination, this equation permits us to obtain a desired moiré line inclination by properly choosing the revealing layer inclination. In Figure 6 we showed an example where the curves of layers follow an identical inclination pattern forming a superposition image with the same inclination pattern. The inclination degrees of the layers’ and moiré lines change along the horizontal axis according the following sequence of alternating degree values (+30, –30, +30, –30, +30). In Figure 9 we obtain the same superposition pattern as in Figure 6, but with a base layer comprising straight lines inclined by –10 degrees. The revealing pattern of Figure 9 is computed by interpolating the curves into connected straight lines, where for each position along the horizontal axis, the revealing line’s inclination angle αr is computed as a function of αb and αm according to the equation above.