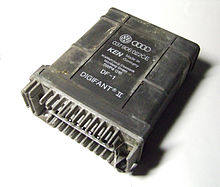 The Digifant engine management system is an electronic engine control unit (ECU), which monitors and controls the fuel injection and ignition systems in petrol engines, designed by Volkswagen Group, in cooperation with Robert Bosch GmbH.

Digifant is the outgrowth of the Digijet fuel injection system first used on water-cooled Volkswagen A2 platform-based models.

Digifant was introduced in 1986 on the 2.1 litre Volkswagen Type 2 (T3) (Vanagon in the US) engine. This system combined digital fuel control as used in the earlier Digi-Jet systems with a new digital ignition system. The combination of fuel injection control and ignition control is the reason for the name "Digifant II" on the first version produced. Digifant as used in Volkswagen Golf and Volkswagen Jetta models simplified several functions, and added knock sensor control to the ignition system. Other versions of Digifant appeared on the Volkswagen Fox, Corrado, Volkswagen Transporter (T4) (known as the Eurovan in North America), as well as later production versions of the rear engined Volkswagen Beetle, sold only in Mexico. Lower-power versions (without a knock sensor), supercharged, and 16-valve variants were produced. Nearly exclusive to the European market, Volkswagen AG subsidiary Audi AG also used the Digifant system, namely in its 2.0 E variants of the Audi 80 and Audi 100.

Digifant is an engine management system designed originally to take advantage of the first generation of newly developed digital signal processing circuits. Production changes and updates were made to keep the system current with the changing California and federal emissions requirements. Updates were also made to allow integration of other vehicle systems into the scope of engine operation.

Fuel injection control is digital electronic. It is based on the measurement engine load (this signal is provided by the Air Flow Sensor), and on engine speed (signal provided by the hall sender in the distributor). These primary signals are compared to a 'map', or table of values, stored in the Engine Control Module (ECM) memory.

The amount of fuel delivered is controlled by the duration of actuation of the fuel injector(s). This value is taken from a programme in the ECM that has 16 points for load and 16 points for speed. These 256 primary values are then modified by coolant temperature, intake air temperature, oxygen content of the exhaust, car battery voltage and throttle position - to provide 65,000 possible injector duration points.

Ignition system control is also digital electronic. The sensors that supply the engine load and engine speed signals for injector duration provide information about the basic ignition timing point. The signal sent to the Hall control unit is derived from a programme in the ECM that is similar to the injector duration programme.

Engine knock control is used to allow the ignition timing to continually approach the point of detonation. This is the point where the engine will produce the most motive power, as well as the highest efficiency.

Additional functions of the ECM include operation of the fuel pump by closing the Ground for the fuel pump relay, and control of idle speed by a throttle plate bypass valve. The Idle Air Control Valve (IACV) (previously known as an Idle Air Stabiliser Valve - IASV), receives a changing milliamp signal that varies the strength of an electromagnet pulling open the bypass valve.

The 25 pin electronic control unit used in the Golf and Jetta receives inputs from the following sources:

Additional signals used as inputs are: 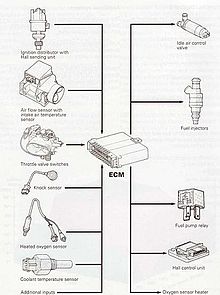 The Anti-lock Braking System (ABS), three-speed automatic transmission, and vehicle speed sensor are not linked to this system.

Outputs controlling engine operation include signals to the following:

The evaporative emission system is controlled by a vacuum-operated mechanical carbon canister control valve. Fuel pressure is maintained by a vacuum operated mechanical fuel pressure regulator on the fuel injector rail assembly. Inputs and outputs are shown in the following illustration. Digifant II as used on Golf and Jetta vehicles provides the basis for this chart.

In North America, Volkswagen released two other versions of the Digifant fuel injection system (in addition to standard Digifant II described above).

A limited number of 1987-1990 California Golf and Jetta models are equipped with Digifant II that features an on-board diagnostics system (OBD). These vehicles have 'blink code' capacity to store up to five Diagnostic Trouble Codes (DTCs). Diagnostic troubleshooting is done by pressing the Check Engine switch on the dashboard. This system can also have carbon monoxide (CO), ignition timing and idle speed adjusted to baseline values.

In 1991, California Golf, Jetta, Fox, Cabriolet and Corrado vehicles were equipped with expanded OBD capabilities. This version was re-named "Digifant I". These later Digifant versions have 38-pin ECMs with Rapid Data Transfer and permanent DTC memory. All Eurovans with Digifant also have rapid data transfer and permanent DTC memory. These systems use a throttle plate potentiometer to track throttle plate position in place of the idle and full throttle switches used on earlier systems.

Another characteristic of Digifant II equipped vehicles in California is a switch mount on the dashboard which has a "Check Engine" symbol. Digifant I models in California feature a Check Engine light, with the display of codes done by a special Volkswagen tool under the shift boot, or by a jumper and an LED by the home mechanic.

Most of driveability issues can be traced back to a few issues:

The engine coolant temperature sensor is located in the coolant flange,(under the distributor on the Polo Fox Coupe) on the front of the cylinder head (on transverse-engine vehicles). The bad earth/ground can be traced to an essential ground strap on the front upper transmission bolt. Without this, the ECU tends to earth/ground elsewhere, causing a specific trace to burn out on the circuit board and killing the ECU. This causes the injectors to stay open constantly, flooding the engine. 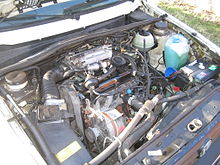 Common issues that are indicative of a failed ECT are:

The part number for this sensor is '025 906 041 A' (always check with your Volkswagen dealer for the most updated part number). The resistance of this unit is appriximately 3.2 Kohm at 10 degrees C. If it measures open circuit this will explain erratic idle and throttle speeds especially when the engine is cold.

Once the new sensor has been installed, start the engine and disconnect the blue coolant temperature sensor. Rev the engine through 3,000 rpm three times, each time allowing the throttle to close completely. This clears the Digifant ECM fault memory.