Marija Šerifović's debut album Naj, Najbolja (English: The Very, Very Best) was released in 2003 and was well received. The biggest hit from the album was the lead single "Znaj da znam" (English: Know That I Know) composed by Darko Dimitrov. In the summer of 2005, she released the single Agonija, which was a cover version of Greek superstar Despina Vandi's "You're Not Here" (Greek: Olo leipeis).

Her second studio album Bez Ljubavi (English: Without Love) was released in 2006, and was as successful as her debut album. In early 2006, she released first single from the album, the title track. On 28 June 2007 she released an album called: Marija Šerifović: Molitva - The Best Of.

Marija's third studio album Nisam Anđeo (English: I Am Not An Angel) was released in spring 2008, and it contained 9 new songs.

In 2003, she participated in the Budva Festival with the song Gorka čokolada ("Bitter Chocolate") again by Darko Dimitrov. In 2004, she took part in the same festival again with a song called Bol do ludila ("pain until madness") and won first prize. The song was a regional chart topper. For the 2005's Beovizija, then the Serbian semifinal of former Serbia and Montenegro's national pre-selection of the Eurovision Song Contest, Evropesma, the song was called Ponuda ("Offer"), and it came 18th. That same year, she entered as a favourite and won the Serbian Radio Festival with a song U nedelju ("on Sunday"), written by Leontina Vukomanović. She also received the award for the best vocal performance.

On February 21, 2007, Šerifović held her first solo concert at Belgrade's Sava Centar, considered to be a major break in the Serbian music scene. A 4,000-strong audience attended.

During the Croatian parliamentary election, 2007, Marija Serifovic sang in Zagreb for the Independent Democratic Serb Party.

Beovizija and the Eurovision Song Contest 2007

Šerifović won the Beovizija 2007 with the song "Molitva" (meaning "prayer" in English) on 8 March, winning the combined votes of the jury and televoting and thus qualified to be the first representative of newly independent Serbia in the Eurovision Song Contest 2007 in Helsinki, Finland. The song was also recorded in English as "Destiny" and in Finnish as "Rukoilen". There is also a Russian version of the song called Molitva (Молитва). 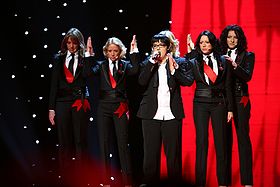 On 12 March, the draw of the running order for the semi-final and the final was held. Serbia was the 15th country to participate in the semi-final, and qualified for the final, where they presented their song in the 17th position, following Germany and preceding Ukraine. Her song "Molitva" (Prayer, Serbian Cyrillic: Молитва) won the Eurovision Song Contest 2007.

At the press after Eurovision Marija said: "Tonight I am very proud being a Serb!"

When she landed at the Belgrade Nikola Tesla Airport, 70,000–100,000 people prepared a mass rally for her in front of the Civic Assembly of Belgrade.

She held a concert in her birth town Kragujevac on 25 May in front of the town hall. She performed in front of about 60,000 people who came to celebrate the triumph at Eurovision. She explained that the concert was very different in Kragujevac, because in that town, she sang before her friends, colleagues, teachers, neighbours and those whom she generally recognised in her every-day life.

On 24 December 2007 in Kragujevac and 15 January 2008 in Belgrade, Šerifović sang her Eurovision winning hit song "Molitva" (Prayer) at an election rally of the Serbian Radical Party. She also endorsed the presidential candidacy of the party's president Tomislav Nikolić adding that her song was "a prayer for a new, different and more honest Serbia". Many of Šerifović's fans were disappointed with her decision to support Mr. Tomislav Nikolić for president, considering that the Serbian Radical Party's platform is traditionally based on a Greater Serbia ideal (considered dangerous by some countries located near Serbia), and the fact that the Serbian Radical Party leader Vojislav Šešelj is imprisoned by the post-war ICTY in The Hague. There has been some speculation that song writers Sasa Milosevic Mare, and Vladimir Grajić Graja who wrote the Eurovision song "Molitva", quit working on Šerifović's new album, because of her political views.[4][5]

The European Union is considering whether Marija Serifovic should be allowed to continue in her role as one of fifteen "intercultural ambassadors" appointed for the European Year of Intercultural Dialogue (2008) due to her nationalist leanings.[6]

However, before Šerifović went to Helsinki, Šerifović participated in an RTS broadcast called "Avalski toranj", where each of four guests give the names of the three most important Serbs ever; as one of her selections, Šerifović chose Dr Zoran Đinđić, ex Serbian Premier and leader of the Democratic Party. Also, in elections for the Croatian Parliament, at the end of 2007, Šerifović went to Zagreb to support Milorad Pupovac, a leader of the Democratic Party of Serbia.