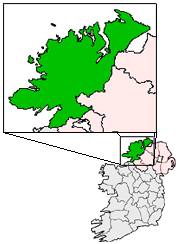 Gola or Oileán Ghabhla is a small uninhabited island off the coast of , , .

Gola island is situated just one kilometre off the coast of Gweedore. Its many beaches and secluded bays attract visitors throughout the year. The island was populated up until the mid 1960s. Today most of the buildings on the island are derelict, but some have been renovated as holiday homes.

The island terrain is mildly hilly with many bog road and sheep paths. At present, during the winter the only inhabitants on Gola are animals. and some shy tend to reside along the cliffs. To the back of the island, seabirds abound, , shags, , s as well as the odd passing and . At the southern end of the near Port na Crin and the old school house, many shore species of bird can be admired such as the , , diver as well as various .

Gola is the birthplace of renowned Irish writer, Seán 'ac Fhionnlaoich. The island has also been immortalised in the traditional children's song "" ("Féilimí's Little Boat") [http://www.thesession.org/tunes/display/3256] .

Gola is renowned for the quantity and quality of the available on its sea-cliffs, and has been very popular with climbers, especially on long weekends, since its climbing potential was discovered in about 1994.

The cliffs are composed of a brownish which gives excellent and generally good protection. The climbing is concentrated around the sea-cliffs surrounding the Mweelmurrinagh hill on the north-west coast of the island, in several cliff-bound inlets and exposed faces, and one small inland cliff which is popular when the is high or the sea rough. Climbs are often tidal, and many are approachable only by . The current guidebook lists about 170 climbs, all single-pitch, with a wide range of grades.

Visiting climbers normally travel to the island by small from or and camp near the at Machaire na nGall on the island's west coast, close to the main climbing areas. The neighbouring smaller islands of Owey and Umphin also offer similar climbing, but do not have a regular ferry service.