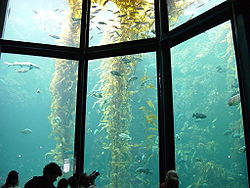 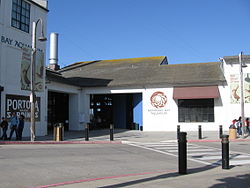 Front entrance of the Aquarium

The Monterey Bay Aquarium (or MBA, founded 1984) is located on the former site of a sardine cannery on Cannery Row of the Pacific Ocean shoreline in Monterey, California. It has an annual attendance of 1.8 million visitors. It holds thousands of plants and animals, representing 623 separate named species on display. The aquarium benefits by a high circulation of fresh ocean water which is obtained through pipes which pump it in continuously from Monterey Bay.

Among the aquarium's numerous exhibits, two are of particular note: The centerpiece of the Ocean's Edge Wing is a 10 meter (33-foot) high 1.3 million liter (1/3 million gallon) tank for viewing California coastal marine life. In this tank, the aquarium was the first in the world to grow live California Giant Kelp using a wave machine at the top of the tank (water movement is a necessary precondition for keeping Giant Kelp, which absorbs nutrients from surrounding water and requires turbidity), allowing sunlight in through the open tank top, and circulation of raw seawater from the Bay. The second exhibit of note is a 4.5 million liter (1.2 million gallon) tank in the Open Sea galleries (formerly the Outer Bay), which features one of the world's largest single-paned windows (crafted by a Japanese company, the acrylic window is actually five panes seamlessly glued together through a proprietary process).[1]

Sealife on exhibit includes stingrays, jellyfish, sea otters, and numerous other native marine species, which can be viewed above and below the waterline. The Monterey Bay Aquarium is also one of only two aquariums in the world to exhibit bluefin and yellowfin tuna (the other is Aquamarine Fukushima in Japan). For displaying jellyfish, the MBA uses an aquarium called a Kreisel tank which creates a circular flow to support and suspend the jellies. Visitors are able to inspect the creatures of the kelp forest at several levels in the building. The aquarium does not house mammals other than otters.

The aquarium occupies land at the end of today's Cannery Row (once Ocean View Avenue) in Monterey, at the site of the Hovden Cannery, a sardine cannery which helped to define the character of Monterey from the time it was built in 1916, to the day when it was the last cannery on the Row to close in 1973, after sardine fishing collapsed. This building was dismantled in 1980, but beginning in 2002 the Monterey Bay Aquarium has blown the original Hovden cannery steam whistle at noon each day to commemorate it.[2]

The aquarium's original building was designed by the architectural firm Esherick Homsey Dodge & Davis and opened on 20 October 1984. The aquarium's mission is "to inspire conservation of the oceans." The aquarium's initial financial backing was provided by David Packard, co-founder of Hewlett-Packard. Packard, an avid blacksmith, personally designed and created several exhibit elements for the aquarium at his forge in Big Sur, including the wave machines in the Kelp Forest and aviary. His daughter, the marine biologist Julie Packard, is currently Executive Director of the aquarium.

The aquarium was built in honor of the work of Edward Ricketts (1897-1948), a marine biologist who specialized in describing communities of organisms (which would also be the focus of aquarium tanks), and whose old laboratory (Pacific Biological Laboratories) and home resides next to the present MBA site.[3] Ricketts, whose life was an inspiration for the eventual building of the aquarium, is famous as the "Doc" of John Steinbeck's Cannery Row. The aquarium itself contains a display of Ricketts's items, including some of his personal library. The shop also sells a variety of Steinbeck books.

The basic design of the aquarium pumps 2000 gallons per minute of Monterey Bay ocean water, night and day, through the more than 100 exhibit tanks. During the day the water is filtered for viewing clarity. During the night, raw (unfiltered) seawater is pumped through exhibits, bringing in food in the form of plankton. Waste ocean water from the aquarium is returned to the Bay. This design makes the aquarium ecologically essentially part of the ocean in the Bay, and allows the culture of organisms such as Giant Kelp which are not suitable for ordinary saltwater aquariums.

The acrylic plastic (the same plastic as Plexiglas and Lucite) that makes the various tank walls ranges from 3 to 13 inches in thickness, enabling them to resist the pressure and high total force of the water behind them.

In January 1996, the aquarium opened the Outer Bay wing to provide exhibits covering the open-water ecology of Monterey's Outer Bay. This area was extensively renovated starting in August 2010, and re-opened July 2, 2011 as the Open Sea galleries. Another exhibit created at this time includes a school of 3000 anchovies (a fish that was once the foundation of Monterey's economy), swimming against the endless current of a toroidal tank. As part of the Open Sea renovation, the aquarium also added a puffin exhibit, juvenile sea turtle exhibit, and multimedia experiences highlighting microscopic plankton. 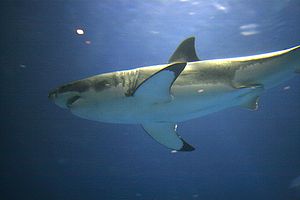 A great white shark in temporary captivity at the Monterey Bay Aquarium.

Beginning in September 2004, the Outer Bay exhibit (now the Open Sea galleries) was the home to the first great white shark (Carcharodon carcharias) ever successfully kept on exhibit. The shark was at the aquarium for 198 days (the previous record was 16 days). The shark was released on 31 March 2005 after she bit two soupfin sharks in the exhibit, both of which later died. The aquarium staff believe the shark may have been acting to defend territory as she didn't actually eat either of the sharks.

On the evening of August 31, 2006 the aquarium introduced a second shark to the Outer bay exhibit. The juvenile male was caught outside Santa Monica Bay on August 17[4] and was released on January 16, 2007. The shark had grown from an initial length of 5-foot-8 and 103 pounds when it arrived on August 31, 2006 to 6-foot-5 and 171 pounds on release. Data from this second white shark was transmitted back to aquarium staff from a pop-off satellite tag after 90 days.

For the third time since 2004, the aquarium had a young white shark in the Outer Bay exhibit in 2007/2008. He arrived on August 28, 2007 and was released on February 5, 2008. Like the first shark in 2004, he was caught accidentally in commercial fishing gear. Like the second shark in 2006, he was a young male: just 4-feet, 9-inches long and weighing 67 ½ pounds. As with both of the previous young white sharks, he was kept in an ocean holding pen off Malibu in Southern California until he could be observed feeding and navigating well in the confines of the pen.

A fourth great white shark, a young female, was kept in August/September 2008; the fast release being due to its unwillingness to feed.[5]

From late August 2009, a young female was again featured in the Outer Bay exhibit and reportedly did well.[6] It was successfully released to the wild in early November 2009. She died after being caught in early March in a gillnet set by a fisherman in waters off Ensenada, Mexico.[5]

This Great White Shark was caught off of Malibu,California on August 18, 2011, and was placed in the Open Sea exhibit on August 31, 2011. It was successfully released on November 1st, 2011 off of Point Conception and was reported dead shortly after.

In March 2000, the aquarium opened a penguin exhibit as part of its Splash Zone family galleries, to complement the already popular sea otter exhibit. Two penguin exhibits house Magellanic penguins from South America and South African penguins. The aquarium hosted 19 penguins from the Aquarium of the Americas in New Orleans along with two sea otters after that aquarium was badly damaged by Hurricane Katrina.

In April 2009 it opened “The Secret Lives of Seahorses,” which includes more than 15 species of seahorses, sea dragons, pipehorses and pipefish and shares stories about the threats they face in the wild.

The Aquarium is currently constructing a special Jellyfish exhibit. It is set to open up in Spring, 2012. It will take the place of the Hot Pink Flamingo's Exhibit.

Monterey Bay Aquarium staff conducts field research on great white sharks, sea otters and Pacific tuna to better understand these species – their migration patterns, population dynamics, food requirements and the threats they face in the wild. Years of data has led to insight into the lives of these animals. Aquarium staff are also involved in research on sevengill sharks, cookie cutter sharks and mobulid rays, as well as ocean sunfish and Humboldt squid, in addition to propagation efforts on several species jellies, seahorses and tropical corals. The aquarium is also one of the main rehabilitation sites for shorebirds in Monterey County, including the Western snowy plover. Since the plover recovery program began at the aquarium in 2000, aviculturists have banded and released 58 snowy plovers of all ages.

The Monterey Bay Aquarium maintains a close relationship with the Monterey Bay Aquarium Research Institute (MBARI). MBARI is located in Moss Landing, California, at the head of the submarine Monterey Canyon. It is renowned worldwide for its research on deep-sea marine life and other programs in marine biology.[7] The aquarium also supports the Center for Ocean Solutions, a nonpartisan organization that brings together marine science and policy to develop solutions to the challenges facing the oceans. Monterey Bay is located within the Monterey Bay National Marine Sanctuary (MBNMS) a Federally-protected marine area (the equivalent of a saltwater national park) off California's central coast. The aquarium is also home to Seafood Watch, which publishes consumer guides for sustainable seafood purchasing.

The Monterey Bay Aquarium was endowed initially with a personal gift from David and Lucile Packard, with the vision that the aquarium would be self-supporting after it opened. Initial construction cost was $55 million dollars. The David and Lucile Packard Foundation, other foundations and individuals support some programs of the aquarium. Operating costs are largely covered by visitor admission, as well as by special events and membership dues.[8] No government money is involved, with the exception of an occasional federal grant given to visiting scientists, for study. The aquarium is organized into three institutions: Monterey Bay Aquarium Foundation, the Support Services, which manages some aquarium-owned property, and the independent Research Institute, which operates three ocean-going research vessels.

The Aquarium appeared in the 1986 film Star Trek IV: The Voyage Home, where it appeared as the Cetacean Institute in Sausalito. The main aquarium was overlaid with special effects to appear to be the tank home of two humpback whales.

In the film, Lemony Snicket's A Series of Unfortunate Events, a character named Stephano is mentioned working with sea snakes at this aquarium; however the real aquarium doesn't have sea snakes.

Marlene the otter, from The Penguins of Madagascar, was moved to the New York city zoo from The Monterey Bay Aquarium, according to the creators of the show.

The Aquarium appeared in the 2008 film Seven Pounds, starring Will Smith, in a scene showing Smith's character as a child seeing a box jellyfish for the first time.