In Romanian, it was previously known as Diciosânmartin, then Târnava-Sânmărtin.

Archaeological research has demonstrated that the presence of human communities in this area dates back thousands of years. In 1921, traces of a Neolithic settlement were discovered; a collection of 135 Imperial Roman denarii and two silver balls were also found. The place was historically certified in 1279, under the name of terra Dychen Sent Marton, in a document involving land relocations and ownership.

In 1502, the place was mentioned as a borough (Medieval Latin: oppidum), as a part of Cetatea de Baltă fief of the Moldavian Princes Stephen the Great and Petru Rareş. Since vineyards covered the majority of the cultivated land, it came to be known as the "vine country" (Weinland).

From the early 19th century until 1918, when Transylvania voted to unite with Romania, the city was a local administrative center inside the Kingdom of Hungary and Austria-Hungary. During the Hungarian Revolution of 1848, Târnăveni was included in the administrative units of Romanians resisting the Hungarian Revolutionary government, and, as part of the 3rd Legion, Cetatea de Baltă, provided soldiers for the army of Avram Iancu; its prefect was Vasile Moldovan (the latter was ultimately defeated and settled in Boziaş, where he later died). 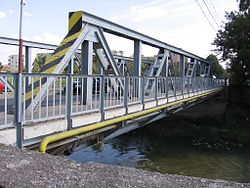 Bridge over the Târnava Mică

After 1866, it served as the capital of Kis-Küküllő comitatus, alternating this attribute with Küküllővár (today's Cetatea de Baltă) or with Erzsébetváros (today's Dumbrăveni). The late 19th and early 20th centuries, a period when many administrative and social-economic facilities were built in the town, marked an urban evolution. In 1912, the locality was raised to the rank of city.

The discovery of methane deposits radically changed the city history: gas was supplied to private residences after 1915. The inhabitants sent representatives to the Great National Assembly held in Alba Iulia on December 1, 1918; inside the Kingdom of Romania, it became the administrative seat of Târnava-Mică County. Named Târnava-Sânmărtin during 1920-1926, and later Diciosânmartin, the locality officially became Târnăveni in 1941.

After World War I, a calcium carbide and calcium cyanamide factory was set up, followed by a nitrogen and later by a coke factory. In 1936, an installation of synthetic ammonia production was set in Târnăveni, the first of this type in the world — over the following years, the company involved in the latter process switched to weapons manufacturing. The administrative palace and the hospital were both built during the urban expansion — the latter was where the famous physician Constantin Ion Parhon, whose family was originally from Cetatea de Baltă, used to consult his patients.

During World War II, the small Jewish community was decimated during the Holocaust, and the synagogue closed down. 230 Romanian soldiers who, after Romania parted with the Axis and joined the Allies in 1944, defended the city against German troops lie buried in the local cemetery.

After the war, the city's industry witnessed a continuous development. In 1957, for the first time in the country, polychlorinated vinyl was produced here. A modern glassware factory — Gecsat — is situated in the southeast area, and produces a wide range of export products.

Târnăveni became a municipality on November 5, 1998. 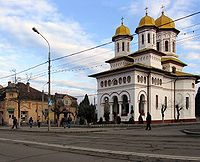 In 1962, the local Museum of History was opened, housing separate sections for archaeology, ethnography, natural science and numismatics. The present-day Unitarian Church, built in Gothic style in the 13th century, redecorated in 1599, houses a silver cup from 1636, as well as a silver plate and a bell dating from 1678. The wooden Christian Church, brought over from the Corneşti village, had its interior painted by Nicolae Pop. The school in Boziaş was set up in 1780.

Other buildings in the city include the Romanian Orthodox Holy Trinity Cathedral (built 1939-1940), the Sfântul Gheorghe Church, and the Roman Catholic church.

One of the main pillars of the Transylvanian School, Petru Maior, was a connected with the city — according to research, his father Gheorghe Maior, lived in Târnăveni by 1750, serving as a Greek-Catholic priest in the Seuca parish. The composer György Ligeti was born here in 1923.