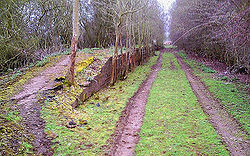 The overgrown remains of Lilbourne station in Northamptonshire, on the former LNWR line from Rugby to Market Harborough which closed in 1966, one of thousands of rural stations and lines which were closed by the Beeching Axe.

An abandoned (or disused) railway station is a building or structure which was constructed to serve as a railway station but has fallen into disuse. There are various circumstances when this may occur - a railway company may fall bankrupt, or the station may be closed due to the failure of economic activitiy such as insufficient passenger numbers, operational reasons such as the diversion or replacement of the line. In some instances, the railway line may continue in operation while the station is closed.

Additionally, stations may sometimes be resited along the route of the line to new premises - examples of this include opening a replacement station nearer to the centre of population, or building a larger station on a less restricted site to cope with high passenger numbers.

Notable cases where railway stations have fallen into disuse include the Beeching Axe, a 1960s programme of mass closures of unprofitable railway lines by the British Government. The London Underground system is also noted for its list of closed stations. During the time of the Berlin Wall, a number of Berlin U-Bahn stations on West Berlin lines became "ghost stations" (Geisterbahnhöfe) because they were on lines which passed through East Berlin territory.

Railway stations and lines which fall into disuse may become overgrown. Some former railway lines are repurposed as managed nature reserves, trails or other tourist attractions - for example Hellfire Pass, the route of the former "Death Railway" in Thailand. Many former railways are converted into long-distance cycleways, such as large sections of the National Cycle Network in the United Kingdom.

Architecturally and historically notable station buildings may present a problem if they are protected under building preservation laws but fall into disuse. Such buildings are often simply demolished (such as Broad Street railway station (London); a similar fate threatens Michigan Central Station), or they may be preserved as part of a heritage railway. Often, in order to be retained as commercially viable structures within an urban environment, or as part of an urban regeneration project, they may be repurposed for alternative activities. Prominent examples include the ornate Gare d'Orsay in Paris, France, which was converted into the Musée d'Orsay art gallery; and Manchester Central railway station which was put to new use first as a car park, and later refurbished as the Manchester Central Conference Centre.

Many abandoned railway stations and line are now being brought back into operational service, notably in the UK where environmental policy is driving the reversal of some of the Beeching closures of the 1960s. In London the Docklands Light Railway made use of disused railway infrastructure for much of its construction; in Manchester it is proposed to expand the Metrolink light rail system by re-opening abandoned rail lines; and in Scotland, the Scottish Government has plans to bring the Waverley Line back into passenger service.

Some railbuffs have a particular fascination with abandoned railway stations, lines, and tunnels. In some cases—particularly with underground structures—these were never actually abandoned. Rather they were constructed to allow for future expansion, but never actually used. The underground aspect is often of particular interest, and extends beyond railbuffs to urban speologists.